On Friday, the DNC Rules Committee voted to approve the following primary schedule: 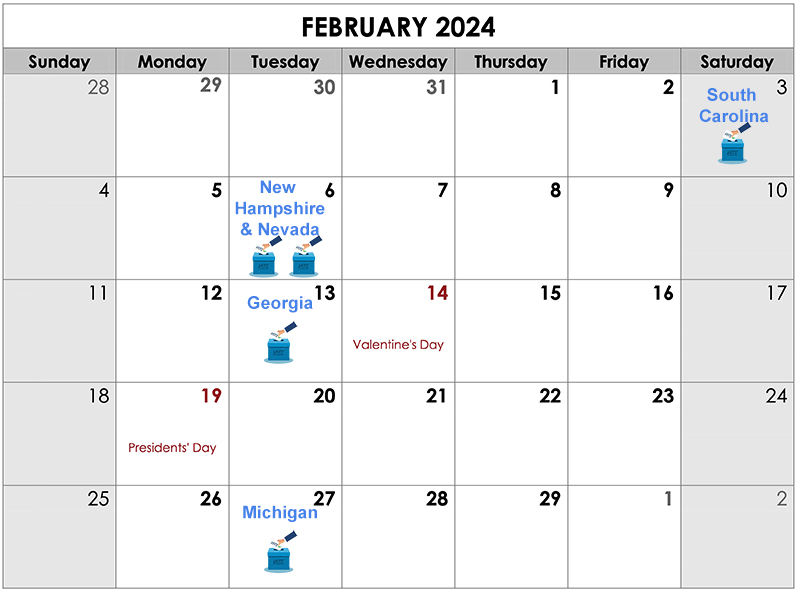 The schedule includes all the states Joe Biden asked the DNC to include, but it also defeats the entire purpose of having a few small states go first. The old schedule had Iowa go first, then a week later New Hampshire, then 10 days later Nevada and a week later South Carolina. By having one per week, an unknown (like Jimmy Carter in 1976) could wear out 10 pairs of shoes trudging through the snow, win Iowa, and then be catapulted into the national spotlight.

The Democrats could have made South Carolina first, then Nevada a week later, then the next state yet a week later. Now candidates have to start off campaigning in the North (New Hampshire), the South (South Carolina), and the West (Nevada) all at once. For a candidate who is relatively unknown, the cost of a three-state campaign spread over the whole country is likely to be prohibitive. Under the new rules, a candidate like Pete Buttigieg would never have done as well as he did. So only candidates who are well known and well funded need apply next time.

Maybe that is a feature, not a bug. If Joe Biden is planning to run again, he may not want some young unknown upstart mayor of a small town who has delusions of grandeur getting any traction. However, if Biden ends up not running, for whatever reason, limiting the candidates to only people who are capable of raising a lot of money early on might not serve the party well. It might even encourage Mike Bloomberg to give it another shot. If he doesn't already own the fastest private jet on the market to zip back and forth between New Hampshire and Nevada, then he can just buy one.

Also weird is the lack of a primary on Feb. 20. It is the day after President's Day, but the 20th is not a holiday. It might have been better to spread things out better, with New Hampshire on the 6th and Nevada on the 13th (or vice versa) and Georgia on the 20th. It's hard to see what value the scrunched up front end and then leisurely back end brings.

As you can see, Iowa is nowhere to be found, but New Hampshire is. To some extent, New Hampshire was saved because it generally votes Democratic in general elections and Iowa doesn't. Take that, Iowa! Also, Iowa has a strange caucus system that excludes some people who can't show up to argue about politics with their neighbors for hours on a cold winter night whereas New Hampshire has a normal primary.

The DNC has to approve this schedule at its meeting in February. That will likely happen. But also, the states have to agree as well. Primaries are controlled by the states. The Republicans hold the trifecta in South Carolina, New Hampshire, and Georgia, and might not wish to play ball. Currently the Democrats have the trifecta in Nevada, but will lose it in January. Only in Michigan will they have it in January. If the states refuse to set the dates the way the Democrats want, then the Party will lose control of the process.

Also, the Republicans are perfectly happy with the current schedule. The RNC voted earlier this year to have the order be Iowa, New Hampshire, South Carolina, and Nevada. This could mean that the Democratic and Republican primaries might be on different dates, although states don't like running two primaries due to the extra work and cost. In those states in which independents can vote in primaries, it forces them to make a choice perhaps earlier than they would have liked.

In addition, New Hampshire is not going to take this lying down. New Hampshire law says its primary must be the first one. State law also gives the secretary of state the authority to set the primary date to make sure this happens. In previous years when the subject of "Who goes first?" came up, then-New Hampshire Secretary of State Bill Gardner (D) said he'd hold the primary on Halloween if he had to, but New Hampshire was going to be first. Gardner has retired, but his replacement, Acting Secretary of State David Scanlan (R), will probably take the same position. If New Hampshire insists on going first, the DNC can penalize candidates whose names are on the ballot, making the primary meaningless. That would solve the problem of two primaries in distant states on the same day.

In short, the last word on this has not yet been said. If the Republican-controlled states refuse to cooperate, we will be in uncharted territory. (V)