Trump Wants to Abolish the Constitution

For Donald Trump, the three basic necessities of life are food, drink, and national attention. The staff at Mar-a-Lago can handle the first two. There is a McDonalds on Belvedere Rd., about a 6-minute drive from Mar-a-Lago. Soft drinks can be bought in bulk and stored forever. But the staff can't get Trump the required attention. He has to do that himself and it is getting harder and harder since he hasn't done or said anything newsworthy since announcing his presidential run on Nov. 15—except having dinner with bigots and Nazis. But that was a week ago.

On Saturday, he thought of something to get some attention. He posted this item on Truth Social:

Do you throw the Presidential Election Results of 2020 OUT and declare the RIGHTFUL WINNER, or do you have a NEW ELECTION? A Massive Fraud of this type and magnitude allows for the termination of all rules, regulations, and articles, even those found in the Constitution. Our great 'Founders' did not want, and would not condone, False & Fraudulent Elections!

It worked! The quote was covered by every media outlet from Axios to Yahoo! and everybody in between. Axios considered it news whereas Yahoo! put it in the Entertainment section. Either way, when a candidate for president says the Constitution should be ripped up, it is probably newsworthy. In the U.K., anti-monarchists are relatively common, but in the U.S., anti-constitutionalists are fairly rare. There is even a political party dedicated to (its interpretation of) the Constitution, the Constitution Party.

Trump calling for terminating the Constitution and just installing him as president certainly breaks new ground. Maybe it is an experiment on his part to see if there are any limits to what Republican officials will accept from him without objection. Last week he discovered that dining with Nazis was fine with most of them (except for a couple who dream of sitting in the big chair themselves). So he had to amp it up a bit.

This cartoon from Steve Breen of the San Diego Union-Tribune was drawn in Jan. 2021, but still reflects Trump's view of the Constitution. 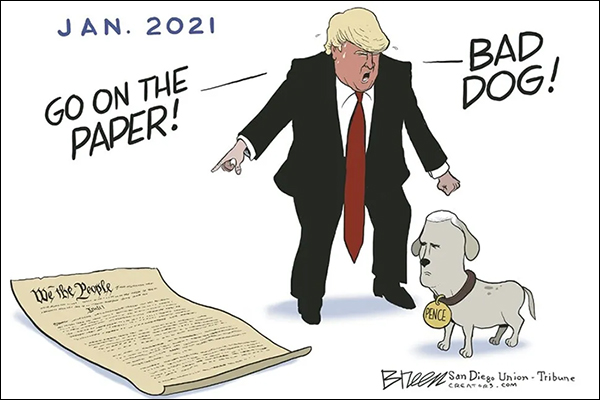 Needless to say, Democrats reacted strongly and quickly. White House spokesman Andrew Bates said: "Attacking the Constitution and all it stands for is anathema to the soul of our nation, and should be universally condemned." Rep. Bill Pascrell (D-NJ) was even less gentle: "A few hours ago the leader of the Republican Party, Donald Trump, called for destroying the Constitution and making himself dictator." The silence from Republican leaders was deafening. For example, Rep. David Joyce (R-OH) was on ABC's This Week yesterday. When George Stephanopoulos asked him what he thought about Trump wanting to toss the Constitution in the recycling bin, he wouldn't answer. He just replied: "He says a lot of things." There were a handful of Republicans, such as Rep. Mike Turner (R-OH), who—when asked point-blank—did condemn Trump, but they were few and far between.

The timing of this outburst was probably not optimal. Although Trump has not appeared in Georgia to campaign for Herschel Walker, everyone there knows that Trump supports him. Hard-core Trump supporters will presumably vote for Walker tomorrow since nothing fazes them. However, there are bound to be a certain number of Republican-leaning voters in Georgia for whom terminating the Constitution is a couple of bridges too far. They might vote for Warnock or just stay home.

Looking a little further down the road, is this what Trump is going to campaign on? "Make me a dictator!" In 2016, he ran on a number of policy issues, including building a wall on the Mexican border and getting Mexico to pay for it, adding tariffs to goods from China, renegotiating NAFTA, banning Muslims from entering the country, repealing Obamacare, and cutting taxes. There were no doubt millions of people who might have been repelled by Trump's behavior but who liked the policy goals and therefore voted for him. How will that work in 2024? Is Trump going to be entirely fixated on how he "won" in 2020? For some people, that might be enough to get them to vote for Trump, but it will be nowhere near 50%.

One person who is no doubt smiling from ear to ear today is Gov. Ron DeSantis (R-FL). The more Trump makes the election about himself and the less it is about issues, the better off DeSantis is. He can make his campaign entirely about issues like abortion, gay rights, critical race theory, woke corporations, taking the "elites" down a peg or two, and appeal to true conservatives on policy while at least seeming like the adult in the room to all Republicans. Probably not smiling at all are the people on Trump's campaign staff. They know that if all Trump talks about is himself and how he was cheated and DeSantis talks about all the culture-war issues that motivate conservative voters, it's going to be a grim primary season for Trump. But there is nothing they can do about it since Trump listens to no one. (V)