Control of the Senate Will Depend on This Strange Tradeoff

Ronald Brownstein, whose analysis is always worth reading, wrote a piece for CNN that makes a very good point. We'll give you a hint before explaining. What do all but one of these gentlemen have in common? 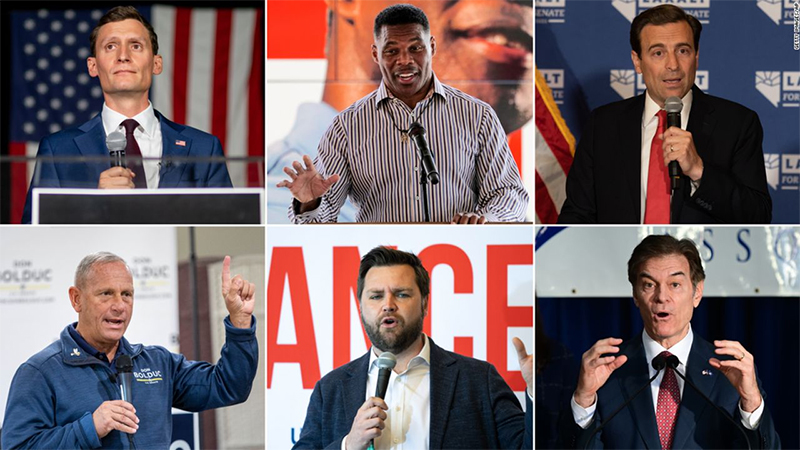 Here's a bit more information. Clockwise from upper left they are Blake Masters, Herschel Walker, Adam Laxalt, Don Bolduc, J.D. Vance, and Mehmet Oz. Yes, all have been endorsed by Donald Trump, but that is not Brownstein's point. OK, here it is. With the exception of Laxalt, a former Nevada attorney general, none of them have any business running for the Senate. All of the others believe wild conspiracy theories and are utterly unqualified for high office. Laxalt does, too, but as someone who was previously elected to statewide office, he is certainly a plausible and reasonably competent potential senator.

Brownstein's point is that most voters probably know that none of them are ever going to rank up there with Henry Clay as one of the greatest senators of all time. None of them except maybe Laxalt will ever contribute to anything senatorial except maybe to make Sen. Tommy Tuberville (R-AL) feel good about no longer being the least qualified senator.

Most Republican and independent voters know in their hearts that their opponents would make better senators. But the real question that will decide control of the Senate is will they vote for someone they know would be a terrible senator on account of that little (R), or will they hold their noses and maybe this one time vote for the Democrat? That's the big question and it holds for at least five of the states. Brownstein quotes Democratic pollster Paul Maslin: "The real question comes down to that group of independents in the middle, and who votes at the end. Is it people saying, 'I hate inflation, crime is wrecking this big city I live in,' or people saying, 'I'm sorry but Herschel Walker is a clown, Mehmet Oz is a clown ... Blake Masters is a joke,' and they go back to [the Democrats]? I don't know. I honestly don't know." In other words, will all Republicans vote for a candidate they know is deeply flawed on account of that little (R) or will they defect this one time.

Strategists for both parties understand this. Republican strategists are trying to frame the election as: "Do you want Sen. Chuck Schumer (D-NY) to be majority leader?" Democratic strategists are trying to frame it as: "Do you want to be represented in the United States Senate by this moron?" Put another way, Republicans want to nationalize the election and Democrats want to localize it and focus on the candidates themselves.

Also a factor is Joe Biden's approval rating. He is way below 50% in all the swing states. Republicans are harping on not having a Senate that will do the bidding of an unpopular president. Democrats are harping on who the voters want to represent them in the Senate.

Brownstein also makes the same point we have all year: America has sort of become a semi-parliamentary system, where the party label is what matters, not "candidate quality." In the distant past, it was easy for a candidate to run far ahead of the popularity of his or her party leader. That is much harder now. For example, in the most recent midterms (2018), in the 10 states with Senate races where Trump's approval was below 48%, every Republican Senate candidate lost. In the 2010 midterms, in the states where then-President Barack Obama was below 47%, Democrats lost 13 of the 15 Senate races. In 2006, in the states where then-President George W. Bush was below 45%, 19 of the 20 Senate Races resulted in a loss for the Republicans.

This means that to hold the Senate, the Democratic candidates in all six of the above races (plus North Carolina and Wisconsin), the Democrat has to run way ahead of Biden's approval rating. Competing against deeply flawed candidates makes it easier, but it is still an uphill climb for them. (V)