Perspective on the House

Three or four House races still haven't been called by most media outlets: CA-3, CA-13, and CA-22. In California, ballots arriving a week after Election Day are valid as long as they were postmarked on Election Day or earlier. The Alaska RCV AK-AL race is also uncalled, but Mary Peltola (D) has 48% to 26% for Sarah Palin (R), so Peltola will probably win that one. David Wasserman of the Cook Political Report thinks the House will end up 222R, 213D, with the Republicans having exactly the same five-seat majority the Democrats have. NBC has it slightly different: 221R, 214D. Either way, the Republicans have control of the House. Whether the Speaker will have control of the House is an entirely different matter, however. Yesterday, Rep. Adam Kinzinger (R-IL) predicted that if Minority Leader Kevin McCarthy (R-CA) becomes speaker, he won't last very long. The most recent Republican Speaker, Paul Ryan, lasted only 14 months and he was a far better politician than McCarthy and had a much bigger majority to work with.

What is also interesting is how rigid the map appears to be. Eight districts flipped from red to blue and 18 flipped from blue to red. The other 409 stayed the same way. Here is a map showing the flips, with gray being "stayed the same." 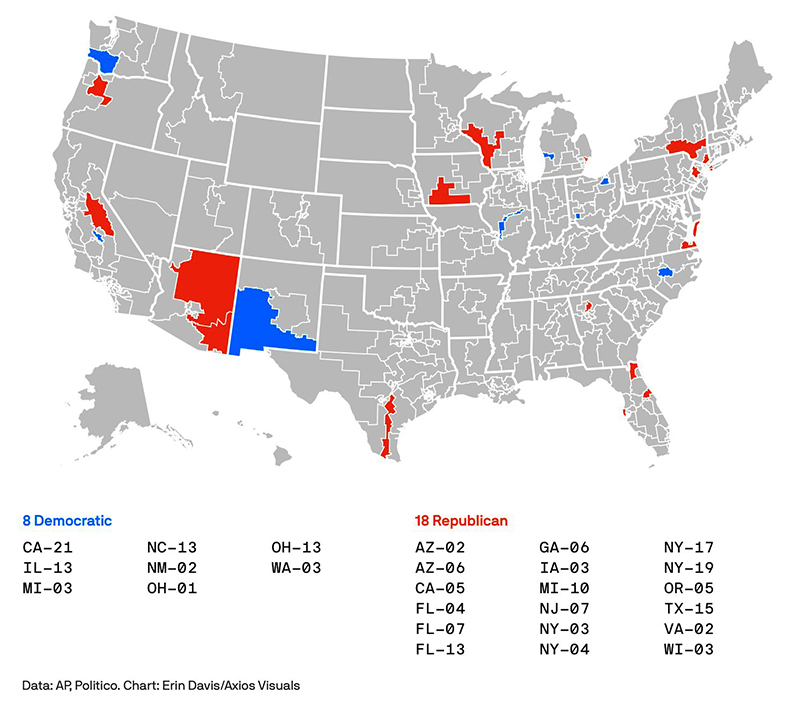 As you can see, in most states (33), nothing changed. In the others, one or two districts changed hands, except for New York, where the Republicans picked up four districts. Also noteworthy is that almost half (7) of the Republican pick-ups were due to redistricting, not voters changing their minds. And four of the districts the Democrats picked up were due to Republicans running super MAGA candidates who even Republicans couldn't stomach. In short, not much really changed, but in the evenly divided country, a handful of flips can turn control over to the other party. Before cheering too much, Republicans should note that if the Democrats can flip five districts in 2024, they will take control back. As an aside, if you want to see what gerrymandering looks like in practice, look at the red TX-15 district in Texas. (V)