What Are the Republicans Going to Do about the Religious Right?

The grip that the religious right has on the Republican Party is well known. It has delivered votes and elections for decades. But is that going to still work going forward? The Bulwark and Salon had stories about that yesterday. In case you don't know, The Bulwark is a right-wing but anti-Trump publication founded by radio host Charlie Sykes and populated by a star-studded cast of anti-Trump Republicans. Salon is a couple of soccer pitches to the left of Bernie. So when they agree on something, it is noteworthy.

The Bulwark's Josua Tait starts out by noting: "Christianity's emphasis on forgiveness, suffering, the meek and poor runs totally counter to the tendencies of the New Right and National Conservatism." In other words, the religious right may be many things, but being Christian is not one of them. Within the religious right, there are certainly some people who are truly devout Christians. But they are in direct conflict with many people who identify as National Conservatives or Christian Nationalists. At the recent National Conservatism III convention, Al Mohler, president of the Southern Baptist Convention's flagship university, said: "conservatives are social conservatives or they are not conservative." Maybe we are misreading him, but we didn't pick up a vibe there about how Christians should help the poor and turn the other cheek.

At the same convention, Rev. Uri Brito said: "Where a Christian majority exists, public life should be rooted in Christianity and its moral vision, which should be honored by the state and other institutions both public and private." Just replace "Christian" with "Islamic" a couple of times and every ayatollah in Iran will sign onto that.

On the other side, Nate Hochman wrote a guest essay in The New York Times that argues "the conservative political project is no longer specifically Christian." He says that the culture wars are not between the religious and secular, but between the "woke" and "unwoke." He notes that traditional Catholics, Orthodox Jews, atheists, and small business owners are all uncomfortable with the "woke" agenda of some progressives post-Obama. This is not religion vs. secular. These people all oppose the (far) left, but largely not on religious grounds.

These developments are causing a split on the right between people who support (or oppose) certain things on religious grounds and people who support the same things on other grounds. It is sort of like battles at vegetarian meetings between the "meat is unhealthy" crowd and the "animals are people" crowd. It's a marriage of convenience. Ross Douthat may have captured where it is heading this with this 2016 tweet: 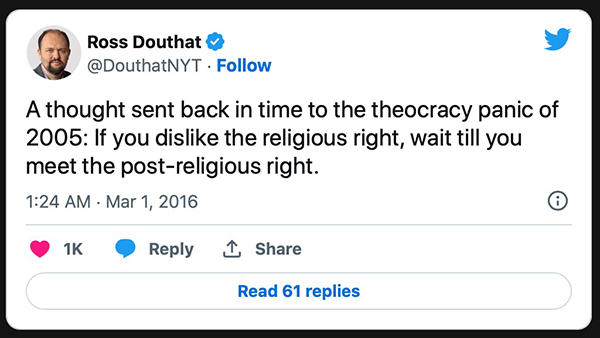 In particular, young voters are not evangelical. A recent poll showed only 12% identify that way while 37% identify as having no religion. Also, they are solidly behind the Democrats on many issues from abortion to LGBTQ+ issues and beyond. Placating the religious right will not play well with younger voters. This group does not vote in large numbers, but as they get older, historical data show that will vote more consistently. And in 10 years, some of the religious right voters, who skew older, will—how shall we put this gently—not be participating in elections at all. Well, unless Lyndon Johnson somehow runs for the Senate again. If Republicans go all out now to worship the religious right, younger voters will note that and will not suddenly forget it in 2024, 2028, and 2032. The most salient part of all this is that the religious right does not see this coming and how it is going to hurt the Republican Party in the long term. (V)