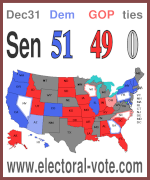 When we previewed Joe Biden's 1/6 address, we pointed out that some Democrats wanted him to keep things low-key and fairly neutral while others wanted him to get out his flamethrower. We weren't sure what the President would do, but we know now: flamethrower.

Harris' remarks were not as... notable as Biden's were. In part, that is because she had much less time, and she was clearly supposed to leave most of the pins up for the President to knock down. In part, it is because she's not an experienced speaker. In particular, she is clearly not used to the teleprompter, as the pauses in her delivery were awkward to the point of being distracting. That said, her argument was that the events of 1/6 were just as much an attack on democracy as the events of 9/11, or those of December 7, 1941. We assume everyone recognizes the latter date, but if not, that's the day that the Germans bombed Pearl Harbor.

Actually, the biggest Kamala Harris news of the day was not her speech. It was previously known that on Jan. 6, a pipe bomb was placed at DNC headquarters by a still-unknown person, and that the discovery of the bomb led to the evacuation of an unnamed non-Biden Secret Service protectee. Yesterday, Politico revealed that the person in question is Harris. In the end, that is not that shocking a revelation, since there can't be too many non-Biden Secret Service protectees hanging around the DNC's headquarters.

There was also a 1/6 commemoration held by members of Congress. It was a brief candlelight vigil with a very short address by Speaker Nancy Pelosi (D-CA), a moment of silence, and a prayer. Because the legislature is out of session right now, there were only 50-60 Democratic members in attendance. There were also two Republicans there. One of them has the last name Cheney, and the other... also has the last name Cheney. That's right, it was Rep. Liz (R-WY) and her father Dick, and both were warmly received. It's a strange world, indeed, when the Cheneys are moderates and are popular with Democratic members of Congress. That certainly would not have been the case circa, say, 2005.

In terms of the new breed of extreme Republicans, the duo we alluded to yesterday held their event... and got zero coverage. We did not name these two Southern members whose last name starts with 'G' yesterday, and we don't really feel like doing so today, either. The less oxygen they get, the better. However, reader T.W. in Norfolk, England, UK sent us a picture that gives a clue as to both of their last names if you're struggling to figure it out: Other Republicans avoided such obvious displays of theatricality, but most of the biggies made sure to get their talking points out there. Donald Trump, of course, blew his stack, and issued a statement asserting that Biden is just trying to distract people from his own failures. Newt Gingrich appeared on Fox, and said that the real villain of 1/6 is Pelosi. Sen. Lindsey Graham (R-SC) took to Twitter to share his view that Biden's speech probably helped enable the Taliban. Fox talking head Tucker Carlson mocked it all, decreeing that "Really not a lot happened that day if you think about it."

You get the sense that most or all of these Republicans would have said most or all of these things regardless of what Biden said in his speech. That means that, in the end, there was really no downside to him bringing the flamethrower. Republicans were going to be angry anyhow, and many Democrats are now thrilled. The question is where Biden goes from here. Was this a one-off, or will "protect the integrity of presidential elections" become a top agenda item for 2022, alongside "protect voting rights" and Build Back Better? (Z)

It's been rumored for weeks, and now it's official: Robert Menendez Jr., son of Sen. Robert Menendez Sr. (D-NJ), is running for the House of Representatives in NJ-08, the district being vacated by the retiring Rep. Albio Sires (D-NJ). "This is a generation defining moment. How we move forward in a time of insurrection, global pandemic, and economic uncertainty will define the America we leave for our children to inherit and will take all of us working together to succeed," Menendez Jr. declared in his candidacy announcement. He may not be fully aware how little power a freshman representative has in a chamber with more than 400 members.

The district, under the state's new district maps, is D+47. So, the only question is which Democrat will replace Sires. Menendez Jr. has no experience in elective office, but he does have name recognition, and his father has already lined up much of the Democratic establishment behind the candidacy, so Junior will be hard to beat. Senior held the seat before Sires did, and as you might gather from the last names of these three men, it's a majority-Latino district (52.7%). So, that likely further limits the pool of candidates who might plausibly defeat Menendez Jr.

It is very clear that Junior is being groomed to replace Senior, who will turn 71 just days before his current term runs out in January 2025. The odds are pretty good that the (attempted) baton pass happens then. (Z)

...and Kristof Is Out (at Least for Now)

The race to succeed the term-limited Gov. Kate Brown (D-OR) was set to be a real barnburner, involving two high-profile Democratic officeholders (Oregon House Speaker Tina Kotek and State treasurer Tobias Read), a popular Pulitzer-prize-winning columnist (Nicholas Kristof), a gaggle of lower-tier Democrats, and at least 20 Republicans, most of whom nobody has ever heard of.

It will probably still be a barnburner. But it probably won't involve Kristof, who was informed yesterday that he's been kicked off the ballot. The problem is that candidate for office in Oregon must reside in the state for 3 years prior to the election. Kristof says he cleared that bar, but his argument is complicated by the fact that he was working for The New York Times, had a residence in New York, and has been voting in New York, including in 2020. To the untrained eye, that makes him seem like a resident of... New York. To the trained eye, too, in particular the trained eye of Oregon Secretary of State Shemia Fagan (D), who is the final decider here. In a press conference explaining Kristof's disqualification, she said "it wasn't even a close call."

Kristof responded, of course, by filing a lawsuit and vowing that he will ultimately prevail in court. He's also going to continue campaigning while he waits for a decision. Presumably, given the time constraints involved (the deadline for being on the ballot is Mar. 8), the decision will be expedited. Kristof was outraising everyone in the race, Democrat and Republican, with nearly $3 million in receipts thus far. It won't be easy to increase that total, however, until such time that he becomes a valid candidate again. (Z)

Time to look forward again. Here are the first eight entries in this series:

We've had several readers suggest that we should set the boldness points now, since now is a better time to make that judgment. This seems like a good idea, so we're going to do it. We will go back over the weekend and add that to the predictions we've already run.

And now, here's what the readers see in the year ahead for Donald Trump's family and supporters:

The predictions will be back next week. (Z)

This Week in Schadenfreude

Legendary football coach and commentator John Madden died last week. We strongly considered doing an obituary of him (and of Betty White), but the politics connection just wasn't there, no matter how much we stretched. Heck, we couldn't even figure out what political party Madden favored, as he almost invariably kept silent on political issues.

Anyhow, in addition to his work on the field and in the booth, Madden is well known—very possibly best-known—for lending his name to a wildly successful Electronic Arts video game. It was originally known as John Madden Football, and then in 1994 began to be numbered by year (e.g., Madden '94, Madden '95, Madden '96, etc.). The series' sales are well north of 100 million, and the total playtime is in the hundreds of billions of hours. (Z), for his part, mastered the art of throwing deep bombs from Stan Humphries to Vance Johnson in Madden '94, and then recovering onside kicks at a rate greater than 90%, resulting in very non-football scores like 106-3, 98-0, and 121-7.

When Madden passed, just about everyone who commented on it also mentioned the video game series. That includes Andrew McGregor, who teaches history at Dallas College. While approximately 99.999% of the comments on the Madden football franchise (and on Madden's life) were complimentary, however, McGregor decided to go for the throat. "I have lots of opinions on John Madden," he tweeted. "The creation of the Madden video game was not a great development for the U.S. It further glamorized violence and dehumanized Black athletes, helping to establish plantation cosplay that has grown worse in the era of fantasy football."

That tweet contains a trifecta of things guaranteed to piss people off: academic jargon, bending over backwards to "discover" racism, and an (implicit) attack on a beloved and recently deceased public figure. If only he'd waited a few days, he could also have gotten Betty White in there and really pushed some buttons.

Now, at this point, we want to tread lightly. Only McGregor knows exactly what his motivations were. However, he's a white guy, and—again, we're trying to tread lightly—any academic has had experience with caucasian colleagues eager to demonstrate how "woke" they are. It is certainly hard to accept that his sentiments were genuine and well considered. After all, there are over 1,000 Black athletes in the NFL at this very moment, and McGregor's tweet clearly implies that they are not clever enough to realize that they are modern-day slaves. It doesn't make things better that many Black NFL players are notable fans of the Madden franchise, up to and including participation in professional video gaming competitions.

As it turns out, Twitter was doubly not McGregor's friend here. He got blasted for his comment, of course. And then, it occurred to some folks to take a look through his past tweets. And when they did so, they found this: It is certainly possible that McGregor has had a "come to Jesus" moment on Madden in the 4 years since he wrote that tweet, and that he really and truly is enraged by the racism that the former coach enabled by... putting his name on a video game. However, Occam's razor suggests that McGregor was performing a little political theater in search of some attention and/or "woke" cred, and he got caught red-handed talking out both sides of his mouth. If so, then that's certainly cause for some schadenfreude. (Z)

As it turns out—and you might not know this—there are other countries besides the United States. Some of them also have elections, and some of them even have important elections scheduled for this year. Seems a little rude to steal attention from the U.S. midterms like that, but there it is. Anyhow, here are some 2022 elections that should be of interest, listed in rough chronological order:

There are some clear themes here; the issues du jour are the pandemic, the economy, immigration, and global warming. And, more broadly, many voters will be helping to decide if the global "authoritarian moment" continues, or begins to draw toward its close. (Z)