Time for another round of slogans. Here are the three previous rounds:

Up today are slogans used by presidents between 1861 and 1945. The late nineteenth and early twentieth centuries produced a lot of bland presidents and a lot of bland slogans, hence the long period of time needed to include four contenders. Here they are: 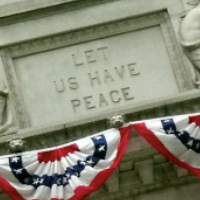 Let Us Have Peace (1868): This one doesn't resonate with modern Americans very much. But while the Civil War itself ended with Robert E. Lee's surrender on April 9, 1865, the tensions that had fueled the war were still very much in effect. From the assassination of Abraham Lincoln, to political tensions in Washington and the impeachment of Andrew Johnson, to vigilantism and the rise of the KKK in the South, to ongoing armed conflict with the Natives, the nation was not in a good place in the years immediately following the rebellion.

This is the context in which Ulysses S. Grant ran for president in 1868. His message was that, as the man who won the war, he could also be the man who won the peace. This promise was perfectly encapsulated by his slogan "Let Us Have Peace." And not only did he get elected in a landslide, he did bring peace, to a fair extent. Washington grew less divisive, the KKK and other extremist groups were stomped out of existence, and the Grant administration pursued a generally humanitarian policy toward the Natives (albeit not a total cessation of violence).

The changes that took place under Grant were secured based on his personal popularity, and did not last much beyond his time in office. The delicate situation in the South descended into white supremacy and lynching within two decades of Grant leaving office. The presidents after him were more aggressive with the Natives, culminating in the Natives' ultimate defeat by 1890. Washington turned nasty again, particularly as the Democratic Party pulled itself together again. Still, the healing that Grant brought to the nation, if only temporary, was such an important part of his legacy that "Let Us Have Peace" is inscribed above his tomb (see picture). 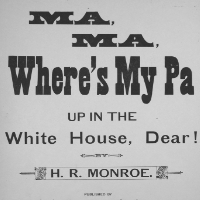 Ma, Ma, Where's My Pa? (1884): Speaking of nasty post-Grant politics, the election of 1884 was a real mudslinging contest. As a general rule back then, the Republicans were dominant nationally, and won virtually all presidential elections. But that year, the GOP nominated James G. Blaine, who was a notorious spoilsman and all-around sleazeball. Meanwhile, the Democrats chose an uncharacteristically strong candidate in Grover Cleveland.

The Republican pooh-bahs knew full well that their candidate's reputation for corrupt behavior would be a problem, so they looked everywhere for dirt on Cleveland. The term "oppo research" didn't exist back then, but if it had, it would be on the mark. And the proto-oppo researchers eventually came up with something: Cleveland might have fathered a child out of wedlock. Hence the slogan, "Ma, Ma, Where's My Pa?"

The problem for the Republicans is that, somewhat like Hillary Clinton's "deplorables," the scheme basically backfired. Cleveland, ensconced in the first-ever presidential sex scandal, did not say "I did not have sex with that woman." Instead, he admitted to a relationship and said he wasn't certain of the paternity of the child but that he paid child support because he felt it was the right thing to do. Voters appreciated his candor and his sense of honor, and "Ma, Ma, Where's My Pa?" became something of a rallying cry for Democrats, as indicated by the pro-Cleveland sheet music shown in the picture. One Democratic voter explained his reasoning: "We are told that Mr. Blaine has been delinquent in office but blameless in private life, while Mr. Cleveland has been a model of official integrity, but culpable in his personal relations. We should therefore elect Mr. Cleveland to the public office which he is so well qualified to fill, and remand Mr. Blaine to the private station which he is admirably fitted to adorn."

Once Cleveland won the election, of course, the Democrats added to the slogan: "Ma, Ma, Where's My Pa? Gone to the White House, Ha, Ha, Ha!" 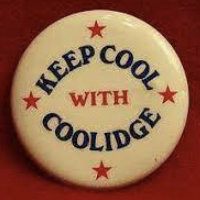 Still, it is definitely catchy. And few slogans have captured the zeitgeist of their era better than this one. Having largely recovered from World War I, the U.S. was cruising along, and wanted more of the same. Though Coolidge had been pretty active in his first year as president, he had been consumed by depression after the untimely death of his son, and he was caretaker president by the time of his reelection bid. But that's what people wanted, and that's what they voted for.

Of course, there is the Titanic problem: sometimes you're cruising along, and not paying attention, and you cruise right into an iceberg. And the 4 years of hands-off stewardship that Coolidge won in 1924 saw the groundwork laid for the Great Depression. The President didn't notice the signs, and certainly didn't do anything to correct course, thus setting the stage for... well, the next slogan. 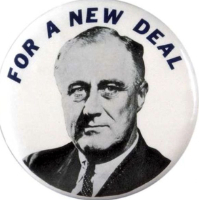 A New Deal for America (1932): The stock market crashed in October 1929, but it took a year or so for the U.S. to be fully subsumed by the Great Depression. Once it was, however, things got ugly: vast unemployment, homelessness, starvation, crime, etc.

Herbert Hoover, who both served and followed Calvin Coolidge, would have been an excellent caretaker president, as he was a very skillful administrator. But when confronted with an unprecedented crisis like the Great Depression? Well, he was the wrong guy. He didn't really believe that trying to smooth out the ups and downs of the economy was the federal government's job. And besides that, he was a man of very limited imagination.

So, to the extent that Hoover had a plan, it was to prop up business interests and to make clear he was "in charge" and that the federal government was still strong. The business part of that did not work out very well, of course. And as to showing strength, Hoover really thought that attacking the Bonus Expeditionary Army—World War I veterans who had descended on Washington in search of early payment of their service "bonus"—would impress Americans. It did not, and he was dead meat heading into the Election of 1932.

The slogan used by Democratic nominee Franklin D. Roosevelt, "A New Deal for America," was not essential to his victory in the presidential election. Hoover would have lost to anyone the Democrats put up. However, the slogan did give people hope, which is no small thing in such dark times. Further, it committed the Roosevelt administration to a program of reform that has no parallel in U.S. history in terms of its scope and impact.

Cast your votes here! And send your comments on the slogans here. (Z)