Employment Up But Unemployment Also Up

Yesterday's report on employment was something of a mixed bag. Unemployment is up 0.1% to 7.9% compared to last month, but the economy added another 171,000 jobs. From the chart below (from the Maddow blog), it is clear that the recovery is continuing, albeit at a slower pace than many people would like. 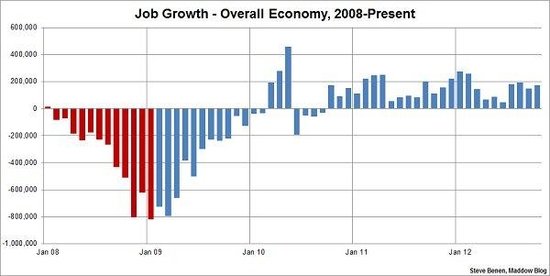 Analysts think that on the whole the report will help Obama since 171,000 new jobs sounds more impressive than a 0.1% increase in the unemployment rate--which was caused by thousands of previously discouraged workers now looking for jobs and not all of them finding one.

Ethnic Mix of the Electorate May Determine the Winner

In 2008, John McCain beat Barack Obama by 12 points among white voters, 55% to 43%. Obama more than made up for that with overwhelming edges among black voters (95% to 4%) and Latino voters (67% to 31%). The most recent WaPo/ABC national poll put Romney's lead over Obama with whites at 57% to 39%. This is 6% worse than in 2008. On the other hand, Obama's margin of victory in 2008 was about 7%, so if he is doing 6% worse with 3/4 of the voters, that would explain why the race is fairly close nationally. If Obama can do as well with the minorities as last time, that might be just enough to barely win the popular vote.

Early Results from Ohio on Election Day May Be Misleading

Ohio Secretary of State Jon Husted has outlined how the results will be released next Tuesday from this make-or-break swing state. The polls close at 7:30 P.M. At 8:30 P.M. he will announce the results of the absentee ballots. About 1.3 million were sent out and 72% of them have already been cast. Absentee ballots are not a good indicator of how things are going except when compared to previous years' absentee ballots.

Once the precincts begin reporting, he will release reports from the big counties every 15 minutes, from the medium-sized counties every 30 minutes, and from the small counties every hour. If the election is close (less than 0.25% between the candidates), there will be a recount on Nov. 27. That might keep the country in suspense for 3 weeks. In addition, there could be hand-to-hand combat over provisional ballots. It is for good reason the election administrator's prayer is: "Lord, let it be a landslide."

Republicans Are Praying for Rain on Election Day

Although most people in the Northeast have seen enough rain recently, Republican strategists would like one more day of it, preferably concentrated in the swing states. A study in the Journal of Politics of elections from 1948 to 2000 showed that for every inch of rainfall above the local average for election day, Republicans got a boost of 2.5%. The reason is that low-income minorities, for whom voting is often a chore, frequently decide to skip voting if it is raining hard. A recent poll showed that 28% of Obama supporters said bad weather would impact whether they vote or not. Only 19% of Romney supporters said this.

Outside Groups Spent Half a Billion Dollars in October

An analysis by Politico estimates that groups other than the campaigns dropped over $500 million on political spending just in the month of October. Topping the list are Karl Rove's two groups, American Crossroads and Crossroads GPS and Mitt Romney's superPAC, which has received tens of millions of dollars from Sheldon Adelson. Together they spent $173 million last month, nearly all of it on negative television ads targeting President Obama. The three biggest Democratic superPACs spent a combined total of $76 million October. All in all, a total of 57 different organizations each spent over $1 million in October, mostly attacking Democrats.

When workers at the now-defunct ACORN, which registered low-income voters, committed fraud by making up false registrations, the Republicans correctly screamed that the law was being broken. There was no evidence that either ACORN itself was aware of these crimes or that any of the imaginary people ever voted. Nevertheless, the Republicans certainly had a valid point: A Democratic-oriented organization had broken the law.

Now the shoe is on the other foot. A young, ecologically aware, Pennsylvania man, Colin Small, has been arrested for registering Virginia voters and then throwing registration forms in a recycling bin where someone found them and reported this to the police. The company Small was working for, Strategic Allied Consulting, was doing this work for the Republican Party of Virginia. It is run by a long-time Republican operative, Nathan Sproul. State authorities are now curious whether Small was simply too lazy to turn in the forms or was instructed by his superiors to first determine the political identity of each new registrant and then throw out the forms of the Democrats. Also of interest is the payment model here. If Small was paid per voter he registered, he would have every incentive to turn in every form. If, however, he was paid only for Republicans he registered and was following instructions, his actions might be more understandable. The case is ongoing.

Betting Site Has Romney as the Favorite--in 2016

Successful people plan ahead, so maybe now is the time to place your bets on the 2016 election. The Irish betting site Paddy Power is now accepting bets on the 2016 U.S. presidential election. Mitt Romney is leading the pack, with odds of 4.5 to 1, followed by Paul Ryan at 7 to 1 and then Hillary Clinton at 8 to 1. Following the top three, in order are Marco Rubio, Jeb Bush, Andrew Cuomo, Bobby Jindal, and Rob Portman. The two people with the longest odds are Sarah Palin (66 to 1) and Donald Trump (100 to 1). The astute bettor can no doubt make some money here.

As to betting on the 2012 election, intrade.com puts the odds of an Obama win at better than 2 to 1.

Are Pollsters Asking the Wrong Question?

A typical presidential poll has as its heart a fairly direct question: "Who are you going to vote for?" According to a new study, however, it may be the wrong question. The right one may be: "Who do you expect to win?" The beauty of the latter question is that it turns the respondent into a minipollster by asking him or her to take into account the views of other people. If someone supports candidate A but knows mostly people supporting candidate B, maybe answering "B" to the question gives what is, in effect, a larger sample. The study suggests that this question actually has a better track record than the more direct one.

Florida and Virginia are still tied. Our averaging window for Florida is now using 10 polls from 9 pollsters and the score is 48% for Obama and 48% for Romney. Of the 10 polls, Obama led in five, trailed in three, and was tied in two. It looks like it is going to right down to the wire in Florida.

In Virgina, there are six polls within the 7-day polling window we use, and the candidates are tied at 47% each. Of the six polls, Obama led in four and trailed in two. What is noteworthy here is that most of the polls show Constitution Party candidate Virgil Goode getting 1-2% of the vote. These are votes that would probably have otherwise gone to Romney. If Obama wins Virginia by 1% or less, he can thank Goode. If Obama loses Ohio but wins the election on the basis of Virginia and a couple of small states, like Nevada, Iowa, and New Hampshire, he really ought to send an expensive bouquet of fresh flowers to Goode.

In Colorado, the average of seven polls put the score at 47% to 47%. Obama has led in three of these polls and Romney has been ahead in four of them. It looks like the real battle is going to be for Florida, Virginia, and Colorado, although if Obama can win Ohio and some of the small states, he can afford to lose all three of these and still eke out a tiny victory.

Nov02 Both Candidates Back on the Campaign Trail
Nov02 October Unemployment Numbers Will Be Out at 8:30 A.M. EDT Today
Nov02 Forget the Middle Class, It's Elite vs. Elite
Nov02 Romney Ad in Florida Ties Obama to Latin American Dictators
Nov02 Bipartisanship Flourishes--with a Couple of Footnotes
Nov02 Tuesday Will Be National Lawyer Day
Nov02 It's Dirty Tricks Time
Nov02 Get-Out-the-Vote Effort Backfires
Nov01 New Batch of Polls Welcome News for Obama
Nov01 Poll: Obama Doing a Good Job Dealing with the Storm
Nov01 Can Romney Expand the Map?
Nov01 Jobs Report Will be Issued Friday at 8:30 A.M.
Nov01 Will the Loser Blame It on Sandy?
Nov01 Native Americans Sue Montana over Voting Rights
Nov01 Same-Sex Marriage Initiative Tied in Maryland
Nov01 Dick Morris Predicts a Romney Landslide and Republican Senate
Oct31 Now Comes the Hard Part for the Campaigns
Oct31 Effects of the Storm on Voting
Oct31 Voter-Fraud Vigilantes Could Affect Voting
Oct31 Hurricane Damage Will Affect Polling All Week
Oct31 Could the Popular and Electoral Vote Be Different?
Oct31 Chrysler CEO Rebuts Romney on Jeeps
Oct31 More Republicans Than Democrats Have Voted in Colorado
Oct31 Charlie Crist Campaigning with Bill Clinton in Florida
Oct30 One Week to Go
Oct30 Obama Cancel Events to Stay in Washington
Oct30 Obama Cancels Events to Stay in Washington
Oct30 Five Hidden Factors That Could Affect the Election
Oct30 Hurricane May Delay Final Jobs Report Scheduled for Friday
Oct30 Who Gets the Blame for the Loss?
Oct29 National Polls Are Divided
Oct29 Where Do We Stand Now?
Oct29 Sandy, Barack and Mitt
Oct29 Lawyers Are Massing for Election Day and Beyond
Oct29 Response Rates to Pollsters Are at an All-Time Low
Oct29 Supreme Court Appointment(s) Could Be the Next President's Only Legacy
Oct29 Palm Beach County Has Another Ballot Snafu
Oct29 Could Faithless Electors Change the Election Result?
Oct29 A Possible Compromise on the Electoral College
Oct29 Another Analysis of Rasmussen Polls
Oct28 Early Voting Started in Florida Yesterday
Oct28 Early Voting Explodes in Nevada
Oct28 NRSC Pulls Out of Maine Senate Race
Oct28 Obama Has to Balance Being Mr. President with Being Mr. Candidate
Oct28 Romney Canceling Virginia Appearances and Heading to Ohio
Oct28 Expat Vote Could Affect Election Results
Oct28 Cookies Are Planning a Big Role in Campaign Advertising
Oct28 Cookies Are Playing a Big Role in Campaign Advertising
Oct27 Frankenstorm Could Determine Election Results
Oct27 As Many as 40 Percent of the Votes May Be Cast Early