Do You Need an ID to Vote?

Election day is only a week away and many people don't know what they need to vote. The National Conference of State Legislatures has conveniently produced this map to show voting requirements nationwide. A quick glance at it shows the redder the state, the harder it is to vote. 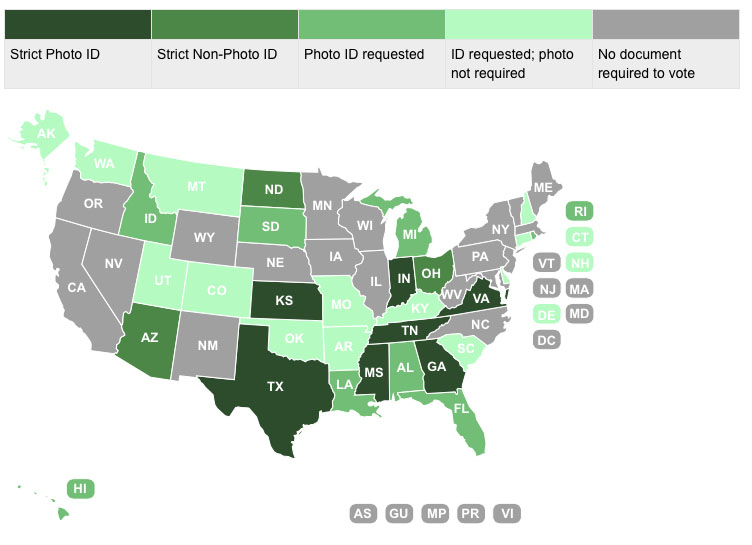 Note that some ID states require a photo ID and some accept other IDs, such as bank statements or utility bills with an address on them. States also differ on what happens if a voter does not have a valid ID. In some cases, they can cast a provisional ballot or sign an affidavit under penalty of perjury that they are eligible to vote. In some cases they have to show up with ID within a specified time period to have their ballot count.

What Name Should a Married Female Candidate Use?

Mark Pryor, Mark Begich, Alison Lundergan Grimes and Michelle Nunn all have famous political fathers whose name no doubt helps them with many voters, but only Nunn takes a lot of heat for it. Her "sin" is not using her husband's last name (Martin), which upsets some conservatives. Grimes, the daughter of the former head of the Kentucky Democratic Party, Jerry Lundergan, has it both ways, but Nunn does not.

This issue has come up before for female politicians. Ivy Baker Priest Stevens, who was treasurer of the United States, had to go to court to drop her new husband's name when she ran for treasurer of California. When former Illinois senator Carol Moseley-Braun became Carol Moseley Braun, many people speculated about the political meaning of the missing hyphen. The big mystery now is who the Democrats are going to nominate for President in 2016. Most likely, her first name will be Hillary, but precisely what comes after that remains to be seen.

Everybody Wants To Be DSCC Chairman in 2016

The Senate map in 2016 favors the Democrats, who have only 10 seats up for reelection to the Republicans 24. Also, 2016 is the echo of 2010, when many Republicans swept into office in a low-turnout wave election. All of them will be in trouble in 2016, especially if Hillary (Rodham) Clinton is on top of the ticket. As a consequence, 2016 will be a good year for the Democrats, no matter who is running the DSCC.

Not surprisingly, quite a few Senate Democrats would like to run the DSCC in 2016 so they can get credit for the expected win. Among the potential candidates are senators Chris Coons (D-DE), Kirsten Gillibrand (D-NY), Claire McCaskill (D-MO), Jon Tester (D-MT), Sheldon Whitehouse (D-RI), Amy Klobuchar (D-MN), and Sherrod Brown (D-OH). Majority leader Harry Reid is the one who makes the decision. One factor that could play a role is geography: which senator comes from a state with lots of big donors. New York has lots and lots of big donors, which gives, say, Gillibrand, a big edge over Whitehouse. The decision doesn't have to be made before the midterms, but needs to be made fairly soon afterwards since the 2016 Senate races begin in earnest on Nov. 5.

Cheapskate Senators Could Be Hurting the Republicans

Some Republican senators have tons of money socked away that they could donate to the NRSC but are not doing so, which has generated a fair amount of grumbling from Republican colleagues and challengers who need it. The biggest cheapskate is Sen. Richard Shelby (R-AL), who has nearly $18 million in his account and never faces a serious challenger. He donated a majestic $17,400 to the NRSC this year. The other senator from Alabama, Jeff Sessions, gave $500,000 to the NRSC, but he is running unopposed this year. Sen. Chuck Grassley (R-IA) has $1.7 million in his account and didn't give a cent to the NRSC. Sen. Dan Coats (R-IN) has $752,000 and didn't give the NRSC a penny either. Sen. Lamar Alexander (R-TN) has $1.3 million cash on hand and a 21-point lead in the polls, but he's keeping the entire $1.3 million for himself. Quite a few other Republicans are misers as well.

If Pat Roberts Loses, It is His Own Fault

After coasting to easy victories for 30 years, Sen. Pat Roberts (R-KS) is in big trouble, and not from a Democrat. It is independent Greg Orman who might end his career. The race is basically Roberts' to lose. For years, conventional conservatives and tea partiers fought over Kansas (Bleeding Kansas all over again?), but Roberts floated above the fray, angering both sides. He really doesn't have any friends in Kansas politics any more and it's his own fault that he doesn't have a permanent address in Kansas. He could have bought a small apartment somewhere; it is not an expensive state. Roberts is 78, and has been in Congress for 30 years but there are no significant laws or achievements he can point to. He has essentially just been coasting on the knowledge that Kansas hasn't elected a Democrat to the Senate since 1932. This year that may have caught up with him.

Begich and Murkowski in Fight over Photo

Sen. Mark Begich (D-AK) has been running an ad showing a photo of Sen. Lisa Murkowski (R-AK) with a voiceover saying that Begich and Murkowski vote the same way 80% of the time, the most of any politically split delegation. He makes the point that if more senators were like them and worked with the other side, the Senate could get things done. Murkowski is furious about the ad and has told him to stop running the photo. Whether a public figure like a U.S. senator can forbid someone from using his or her photo is dubious at best. Begich says she merely doesn't like the way she looks in the photo, which is certainly not her point.

Pornographer Larry Flynt, the publisher of Hustler magazine, has now gotten involved in the already messy Kentucky senate race. Flynt, a Kentucky native, said he was dismayed that McConnell was apparently paying people to show up at his campaign events to make the crowds look bigger. Flynt said that in his business when you pay people to pretend they love you it is called prostitution, so McConnell is running a voter prostitution ring.