One year to go. A year from today the new President will be inaugurated, but until then it will be an exciting time.

The Republican Party took a big hit yesterday when former Alaska governor and 2008 vice presidential candidate Sarah Palin endorsed Donald Trump. Virtually no high-profile Republicans have endorsed him and now one of the highest profile Republicans has jumped on his bandwagon. While the value of endorsements is in dispute, hers might actually help among evangelicals or tea party supporters torn between Trump and Sen. Ted. Cruz (R-TX). In 2012, Palin endorsed Cruz in his Senate run, so this is surely a big disappointment to Cruz, who is locked in a tight race with Trump for the nomination. A Trump/Palin ticket, anyone? After all, she can remind him that she has experience running for Vice President. She also likes Trump. The other people with experience—Paul Ryan and Dick Cheney—less so.

To make things even worse for Cruz, Gov. Terry Branstad (R-IA) said yesterday that he wants to see Cruz defeated in Iowa. It wasn't literally an endorsement of Trump, but a disendorsement of Trump's only serious competitor in Iowa is probably close enough for government work.

These developments are nothing but a headache for the Republican party. The GOP establishment really does not want either Trump or Cruz as its nominee. Trump is probably worse than Cruz, though. A Cruz nomination is just a victory of one faction within the Republican Party over the others. That can easily be repaired in 2020. A Trump nomination could redefine the party as standing for racism and bigotry rather than simply being a conservative party. It is also possible that in the event Trump is the nominee, some other Republican might run as a third-party candidate. That would certainly not happen if Cruz is the nominee.

This is what the New York Daily News, which endorsed Mitt Romney in 2012, thought of Palin's endorsement. (V) 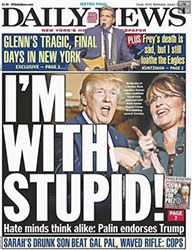 Speaking of once-prominent conservatives whose star has faded more recently, the news was not all bad for Ted Cruz on Tuesday, as broadcaster and pundit Glenn Beck threw his weight behind the Texas senator. He also declared that Donald Trump is a "monster" and that as President the Donald would be "much, much worse" than Barack Obama.

Beck's actual endorsement came last week, but now he's made clear he will hit the campaign trail and also make full use of his website/TV channel The Blaze to promote Cruz's campaign. This is a nice boon for the Senator, but its value may be limited. Given Beck's strongly evangelical predilections, most voters who value his opinion were likely already on the Cruz bandwagon. Beck's remarks implicitly affirm this. He is a businessman, first and foremost, and if he believed a sizable percentage of his listeners/viewers were Trump supporters, he most certainly would not be lambasting The Donald. (Z)

Still angry over the moderators' handling of the October 28 GOP debate on CNBC, the Republican National Committee has followed through on their threats, taking the February 25 "Super Tuesday" debate away from CNBC parent network NBC and awarding it to CNN.

The change is wholly unnecessary, as the relationship between NBC and CNBC does not go much beyond the name. The two channels have different staffs and very different levels of talent and resources. However, the RNC had to save face, and also wanted to send a warning to other networks to play nice. CNN has not named a moderator yet, but whether it is Wolf Blitzer or Anderson Cooper or one of their other A-listers, the Republican candidates are not likely to get the kind of softballs pitched to them by Fox Business Network, so the RNC may ultimately regret its decision. (Z)

Even if Sanders Wins IA and NH, He's Not Home Free

Charlie Cook, one of the best political gurus around, has some advice for Hillary Clinton: Don't panic. And certainly don't move to the left. Sanders might win Iowa, but polling tends to be spotty because turnout is always low and often depends on the weather. Sanders is 27 points ahead of Clinton in New Hampshire at the moment. However, New Hampshire polling is tricky because independents can walk in and request either the Democratic or Republican ballot. Republican-leaning independents might be tempted to to get a Democratic ballot and vote for Sanders because they see him as unelectable. Democratic-leaning independents might want to vote for Donald Trump because they are sure he can't win the general election. No one knows how this will play out until election day.

But Cook makes another, even more important point. Sanders won't be able to reproduce the Obama map of 2008 because Obama swept all the Southern states in the primaries and there is no way an old leftist white guy can do that. Sanders might win all of New England and all the caucus states (where a few thousand passionate voters can make a big difference). However, all these states combined provide only 36% of the needed delegates. To get the nomination, he will have to do well in the big blue states where Clinton beat Obama in 2008. He need not win them, since all the Democratic primaries are proportional, but he needs to come close in a decent number of them. If Clinton tries to hug the center, she will do better in the big states like Pennsylvania, Michigan, Ohio, and California, all of which she won in 2008. These states have many more centrists than New England and being big, getting a few thousand very passionate voters to the polls won't be enough.

Another piece of evidence suggesting that Sanders still has his work cut out for him is an NBC poll released yesterday giving Clinton a 16-point lead over Sanders nationally, 52% to 36%. Two polls we reported Monday put her up 25 points nationally. So her lead is probably in the 16-25 point range, still quite a bit no matter which is a better measure. In other words, as we have seen in the past, Iowa and New Hampshire are very unrepresentative states and neither has a stellar track record. (V)

Bush and Rubio Tied for Third Place in Florida

We haven't had a lot of polling of Florida, but the state is interesting for several reasons. First, its 99 delegates, chosen on March 15, are winner-take-all. Second, assuming Jeb Bush is still in the race then, he and that other Floridian, Sen. Marco Rubio (R-FL), will meet head to head in their home state. For either one, being beaten in your own state would be very embarrassing. Currently they are essentially tied:

Finishing third behind Trump and Cruz in his home state would be bad enough for Rubio, but being fourth behind Bush could be fatal. (V)

Democrats may be counting on Latinos to save them, but there is a problem here: Many eligible Latinos don't vote. About 27 million Latinos will be eligible to vote in the November elections, but a majority probably won't. A new report from the Pew Research Center shows that Latino turnout was just under 50% in 2008, 48% in 2012, and 27% in 2014. There are various theories why Latino turnout is well below that of whites and blacks. One is that the Latino population skews young, and young people are notoriously poor voters. Another is that they are concentrated in states that aren't contested in presidential elections, with 52% living in California, Texas, or New York. A third theory is that many of them don't think voting will help them personally. Finally, a fourth possibility is that laws intended to suppress minority voting (such as a photo ID requirement) are having the intended effect. (V)

Earlier this month, we had a table breaking down the Republican caucuses and primaries, including dates, delegates at stake, and method by which delegates are awarded. The latter point deserves a bit more elucidation.

There is a widespread perception that after March 15 the Republican process enters a "winner-take-all" phase, so as to give the frontrunner/ultimate nominee some momentum going into the convention and the general election. This is not the case. The choice of how to award delegates is (mostly) left to each state party committee, and the state committees' top priority is not to serve the needs of the national party, but instead those of the state committee. That means, first of all, getting as many voters involved as is possible. Involved voters donate money and time, and also may show up for the midterms. Further, the committee wants their state to be "valuable" to the candidates, in hopes that campaign visits will be scheduled, promises will be made, and—in the event of a victory—some nice, juicy pork will come down the turnpike (or the freeway, out west).

As they try to best advance their goals, the state committees have a tactical decision to make. The ideal situation, from their perspective, is to be a sort of primary "swing" state, where it is unclear as to the overall direction the state's voters might take. In that case, the state committee can choose a winner-take-all allocation, which means that they are holding out as big and juicy a prize as is possible, while still being able to count on a good turnout.

But what if a state's overall predilections tend to be pretty clear? For example, if California's Republicans were left with a choice between Marco Rubio and Ted Cruz, they would certainly bestow the majority of their votes on Rubio. If California were winner-take-all, many social conservatives would stay home for the primaries, and might sit out the general election as well. Cruz would have no particular reason to visit the state, or to try and curry favor with California Republicans. As such, California divides its delegates, so there could be a prize for everyone.

If this all seems very complicated, it is because it is. But the upshot is that Mitt Romney and Sen. John McCain (R-AZ) both piled up the delegates because, by the time the calendar turned to May, they were essentially unopposed. This turned a lot of proportional and split decision states into de facto winner-take-all states. In a circumstance where two or three candidates remain viable deep into May or June, however, it is entirely possible that most states will split their delegates fairly evenly, increasing both the chaos and the chances of a brokered convention. (Z)