•  Trump's Meeting with Pence Spurs Veep Rumors
•  Gingrich: "No Evidence" Trump Is a Racist
•  FBI Interviews Hillary Clinton about Her Email Server
•  Trump Just Can't Help Himself
•  Poll: Neither Clinton Nor Trump Will Be a Good President
•  Trump Claimed a Net Worth of $4.2 Billion in 2011
•  Clinton Ads Running Most Heavily in Orlando, Denver, and Raleigh

Yesterday, Donald Trump met with Gov. Mike Pence (R-IN) at Trump's golf course in Bedminster, NJ. The meeting was undoubtedly called so Trump could inspect Pence as a potential running mate. Pence's wife, Karen, was there but Trump's de facto campaign manager, Paul Manafort, was not, even though he is nominally handling the Veep search.

Pence was elected to the House six times before he successfully ran for governor of Indiana in 2012. He is a favorite of religious conservatives and could help Trump considerably with this group, since Trump himself is neither religious nor conservative. As a congressman, he opposed having anti-discrimination laws to protect gays. He also opposed gays serving in the military, as well as same-sex civil unions and marriages.

As governor of Indiana, he cut the income tax by 5% and abolished the state inheritance tax. In March 2015 he signed a bill, SB 101, that permitted businesses to discriminate against gay and lesbian people. To his surprise, a lot of businesses didn't want this right. Apple's CEO Tim Cook condemned the law. Salesforce.com's CEO, Marc Benioff, went even further and canceled the company's plan to expand in the state. Angie's list said it would kill a $40 million expansion in Indiana that would have brought in 1,000 jobs. The mayors of San Francisco and Seattle banned official travel to the state. Pence apparently thought that discrimination would be an electoral winner and had not counted on such a strong backlash. A week later he signed another bill that weakened the original bill somewhat.

Although Pence has both D.C. and executive experience, he is also very controversial on account of the above law. If he were named Veep, the media would undoubtedly zoom in on SB 101 and Pence's views on gay rights. While this would play well with religious conservatives, it would play very badly with young voters, Democrats, and many independents. In fact, this could be the straw that broke the camel's back with young supporters of Sen. Bernie Sanders (I-VT) and finally got them to grudgingly support Hillary Clinton in order to stop Trump/Pence.

Other people believed to be in the running for the #2 slot on the Republican ticket are Gov. Chris Christie (R-NJ), former Speaker Newt Gingrich, Sen. Bob Corker (R-TN), and Sen. Jeff Sessions (R-AL). However, each of these has problems as well. Christie is deeply unpopular in his home state, and has zero chance of turning New Jersey red. Gingrich, like Trump, has been married three times, and also like Trump is a world-class philanderer. Corker is a serious and knowledgeable politician with deep experience but he is not the kind of flamethrower conservatives want. Nobody outside of Alabama has ever heard of Sessions. So maybe it will be Pence.

Gingrich: "No Evidence" Trump Is a Racist

Newt Gingrich is pushing hard to be Donald Trump's #2. He's praised The Donald lavishly, while also re-configuring his political program—though he helped pass NAFTA, he now hates free trade—to match with his would-be running mate. Speaking on Saturday, Gingrich kept up the full-court press while also raising a few eyebrows. Asked about Trump's comments regarding Judge Gonzalo Curiel, the former Speaker said that a few "misguided" comments had been made, but that, "there's no evidence at all that Trump is a racist." Right, just like Eastern Europe wasn't being dominated by the Soviets during Gerald Ford's presidency.

Gingrich also issued forth with a few other gems, most notably his declaration (as a trained historian) that Trump is, "one part Andrew Jackson, one part Theodore Roosevelt, and one part P.T. Barnum." The Barnum part of that is a slam dunk. And the Jackson parallel, while not great, is at least viable—Jackson and Trump both appealed to the fears and prejudices of the working class, for example. But Trump and TR? That one's hard to fathom. Roosevelt was a veteran, Trump is not. Roosevelt "spoke softly," Trump does not. Roosevelt was the youngest president in American history (42), Trump would be the oldest (70). Roosevelt took on Wall Street, Trump is Wall Street. It would be hard to find a president who is less like Trump than the Rough Rider. Maybe Lincoln.

In any event, Gingrich can keep shooting from the hip as long as he's a former Speaker who aspires to resume his political career. But if he is added to the GOP ticket, he becomes a spokesman for that ticket. If that comes to pass, can he learn to discipline himself (in a way that Trump cannot)? Because, as Sen. John McCain (R-AZ) can attest, there's nothing worse than a VP that constantly embarrasses the ticket. (Z)

Yesterday morning, the FBI interviewed Hillary Clinton about the most famous email server in the history of the planet. Observers close to the FBI investigation said that Clinton is probably the last person to be interviewed, meaning that the investigation is drawing to a close. Clinton maintains that no email marked as secret was sent or received on the server, although some messages have been retroactively classified.

Bill Clinton had a happenstance meeting with Attorney General Loretta Lynch last week in Arizona, but says they didn't discuss the email controversy. Lynch has since said that she will accept the FBI's recommendations and not overrule the Bureau. (V)

The FBI's interview of Hillary Clinton put the email scandal back in the headlines, yet again. Donald Trump could easily have taken the day off, and he still would have "won" the news cycle, just because of the damage that Clinton is taking. But keeping quiet isn't Trump's style, and so he decided to double down, posting a "crooked Hillary" image to Twitter: 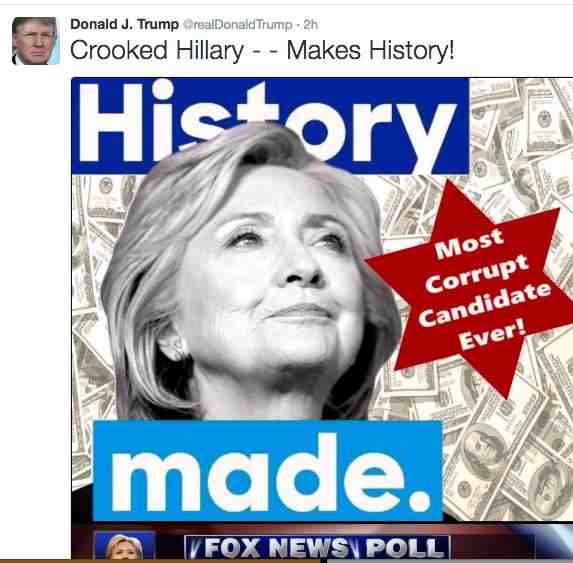 The tweet really stepped in it due to the use of the Star of David symbol, which caused many people to perceive the image as anti-Semitic. Very quickly, it became a major story, trending in Google searches and on Twitter. So much for the email server. (Z)

Poll: Neither Clinton Nor Trump Will Be a Good President

Quinnipiac has a new poll out in which they asked respondents, among other things, whether or not they thought the two parties' presumptive nominees would be good presidents. 58% said Donald Trump would not be, while 53% said the same about Hillary Clinton.

The good news for the candidates is that these results don't mean much. We are in the midst of a particularly acrimonious period in American political history. Voters are constantly told how bad the candidates are, so of course a lot of them believe it. Beyond that, nobody has ever cracked the mystery of what kind of resume makes for a good president. John Quincy Adams, Martin Van Buren, James Buchanan, and Herbert Hoover, among others, seemed to be loaded with promise when elected and turned out to be disasters. Meanwhile, few observers had much faith that James K. Polk, Abraham Lincoln, and Theodore Roosevelt were up to the challenges of the presidency, and things worked out ok for them.

The unhappy news for the candidates is that the "bad president" sentiments aren't going to subside much once they are in the White House. If, say, Hillary Clinton is elected, she will be lucky if she gets to a point where only 45% of voters think she's a terrible president. Chief Executives do not generally earn a reputation for greatness until well after they leave the Oval Office. An assassination will speed that up, but that's a cure that's worse than the disease. (Z)

A new document uncovered by The Guardian shows that Donald Trump filed a 132-page document with the Securities and Exchange Commission in June 2011 in which he claimed to be worth $4.2 billion. He now claims he is worth $10 billion. The document also says his liquid assets are $250 million, which is not even close to enough to finance a modern presidential election campaign. In November 2011, Trump claimed to be worth $7 billion, of which $3 billion was his personal brand as an asset. This is consistent with the 2011 filing that his real estate is worth $4 billion. In any event, Trump's claim that he is worth $10 billion is likely to be highly inflated. (V)

Clinton Ads Running Most Heavily in Orlando, Denver, and Raleigh

If you want to find out what a candidate thinks is important, follow the money. In the case of Hillary Clinton, her campaign is spending more in the Orlando, Denver, and Raleigh markets than anywhere else, indicating that she intends to fight very hard for Florida, Colorado, and North Carolina. Further pointing to this strategy are the large ad buys scheduled to run in Tampa-St. Petersburg and Charlotte in early July. In the period of June 15-27, Clinton ran 9,781 ads for a total cost of $6 million or about $500,000 per day. In this period, Trump ran zero ads. (V)