Sunday was a day for "thoughts and prayers," whatever that really means, but by Monday the two presumptive nominees had had time to prepare more thorough responses to the Orlando terror attack. And their responses almost could not have been more different

First up was Donald Trump, who delivered the exact speech that everyone was expecting. It was full of red meat for his followers, which meant blasting Hillary Clinton as an appetizer, and then conflating immigrants, Muslims, refugees, and terrorists as the entree. This position is not supported by logic, nor is it supported by fact, since the shooter—while a terrorist—was not a particularly observant Muslim, and was most certainly not a refugee or an immigrant, having been born in New York. Trump also made liberal use of the phrase "radical Islamic terrorism," like it was going out of style.

Trump supporters were likely delighted by what they heard, but, not surprisingly, the commentariat was underwhelmed. Vox's Jeff Stein quickly put together a list of the nine biggest lies that Trump told. Meanwhile, the Washington Post pointed out that Trump's rhetoric is enormously valuable to ISIS, since it gives them material to support their case that the West hates Muslims. Other media outlets were equally disdainful of Trump's speech, as were many conservative pundits.

Trump, of course, was impervious to any criticism. Indeed, in a Monday interview with Fox News, he doubled down, not only reiterating his assessment of the shooting, but also implying that President Obama might be behind the incident. When the Washington Post dared to post a story about that last point, The Donald promptly revoked their press credentials and said the paper would no longer be allowed to cover his events.

Hillary Clinton's address, by contrast, was considerably more statesmanlike. She refused to mention Trump by name, though she did lament "inflammatory anti-Muslim rhetoric." She also laid out a specific plan for fighting domestic terrorism: increased efforts to find "lone wolves," pressure on allies to denounce states that sponsor terrorism, and tightening regulations on assault weapons. It's not a perfect plan, and the latter portion has come under particular scrutiny, even from left-leaning media. Still, it's something. Clinton also got a good response when she pledged her support to the LGBT community, declaring, "you have millions of allies who will always have your back. And I am one of them."

The insta-analysis is that the shootings will benefit Trump, politically. Maybe so, or maybe the experts aren't giving the voting public enough credit for being able to separate substance from bluster and wild conspiratorial thinking. (Z)

The Final Primary Will Be Held Today, in D.C.

The Democrats are holding the last nominating contest of the season today, a closed primary in Washington, D.C. (Republicans in D.C. voted on March 12). There will be 20 pledged delegates at stake, and given that more than half the residents of D.C. are black and that many of the whites are party insiders or work for the Obama administration, it is expected that Hillary Clinton will cruise to an easy victory over Sen. Bernie Sanders (I-VT).

Many people expect that later in the week, Sanders will throw in the towel, probably in exchange for some concessions (although Clinton got few, if any, concessions from Barack Obama in 2008 in return for her exiting the race). (V)

Three of the four top Democrats in the country are women: presumptive presidential nominee Hillary Clinton, House Minority Leader Nancy Pelosi (D-CA), and DNC Chairwoman Debbie Wasserman Schultz [Senate Minority Leader Harry Reid (D-NV) is the odd man out]. When Clinton and Sanders finish their talks this week, there may be only two women left. Sanders has long complained about Wasserman Schultz's being biased in favor of Clinton and this is his chance to make one of his demands that she be fired. However, it is not a done deal quite yet. Her defenders point out that she managed to retire $24 million in DNC debt and help build up the state parties. This year alone she has traveled to 16 states and headlined 294 events raising money for the Democrats. But Sanders doesn't care much about what she has done for the Democratic Party because he is not a Democrat. He cares a lot about her decision to limit the presidential debates and schedule them at times few people were watching. Many DNC members dislike her and call her "autocratic," a characteristic that when applied to male politicians is often referred to as "leadership." If Clinton has to push for Wasserman Schulz's dismissal in order to get Sanders on board, she will probably do it, but not without reservations. (V)

For the entire campaign, Bernie Sanders has been saying that the existence of superdelegates is inherently undemocratic. Currently he is arguing that the race isn't over yet because 400 superdelegates might yet change their minds and vote for him at the Democratic National Convention. Now Rep. Tulsi Gabbard (D-HI), one of Sanders' few supporters in Congress, has a petition going that asks the Democratic National Committee to eliminate the superdelegates, at least in the future, because they are undemocratic. She says she has over 100,000 signatures, though the signatures are not publicly available.

Now, suppose there had been no superdelegates this year. What would the result have been? To start with, there would have been only the 4051 pledged delegates, so getting 2,026 delegates would have given a candidate a mathematical lock on the nomination. Here is what the results would have looked like, state by state. 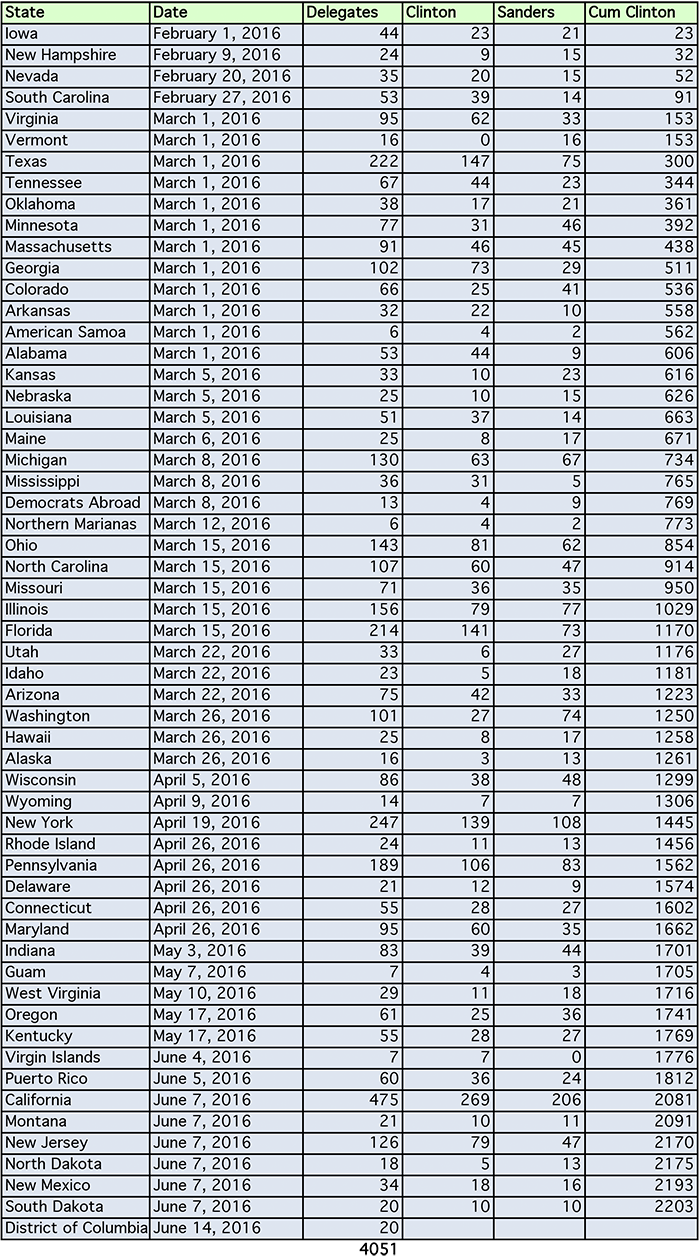 As you can see, in the absence of superdelegates, Hillary Clinton would have mathematically eliminated Sanders on June 7. Since the Democrats do have superdelegates, Sanders can keep his hopes alive for a few more hours since, in theory, the superdelegates could still rescue his candidacy. If Gabbard gets her way and superdelegates are eliminated in 2020 and beyond, then if the votes go the same way in the next contested primary, the insurgent will be completely eliminated after California votes, with no chance of pulling a rabbit out of a hat at the convention. The people who control the Democratic Party may decide they like that, and so Gabbard may get what she wants, albeit not for the reasons she has stated. (V)

Voter Registration Laws Are Not Enforced

When, in 2013, the Supreme Court struck down major parts of the Voting Rights Act of 1965, almost two dozen states where Republicans are in control passed new laws whose real purpose was to make it harder to vote (photo ID requirements, fewer voting days and hours, etc.). Democrats complained loudly about the new laws, but talked surprisingly little about a weapon they have but rarely use: the National Voter Registration Act of 1993, sometimes called the "Motor Voter Act." This law requires the states to make it possible for anyone who applies for a driver's license to simply check a box on the form to register to vote. Many states simply do not comply. The stated purpose of the law was to make it easier for everyone to register to vote. In practice, the states that don't provide the option are the same states that have passed new laws making it harder to vote and for the same reason: They don't want poor people and minorities to vote.

Another provision of the law requires agencies that help the poor by providing food, health care coverage, and so on also provide voter registration forms to the people who come looking for help. Most of them don't, although when a Democrat is in the White House compliance with the law is greater than when a Republican is there. (V)

States That Could Swing in 2016

Those who follow American politics, even in passing, know the main swing states: Ohio, Florida, Virginia, Colorado, North Carolina, etc. This year's election is unusual, however, and there are a number of additional states that may unexpectedly be in play. Here are five that could prove to be "surprise" swing states:

It is likely that the majority of these states will end up in the same column as in 2012. However, it's also likely that at least one or two of them will flip—the only question is which. (Z)

During a radio interview yesterday, conservative host Hugh Hewitt urged Sen. Marco Rubio (R-FL) to run for his Senate seat again. Rubio said that he was "deeply impacted" by the attack in Orlando, but refused to say if he would reconsider his earlier decision not to run. Among other complications is his support for his friend Carlos Lopez-Cantera. If he decided to run, he would not only have to "un-endorse" his friend but run against him. Furthermore, given Rubio's poor showing in the Florida primary, it is far from a sure thing that he could win either the primary or the general election. But he has to decide soon, as the filing deadline is June 24. (V)

Today is Donald Trump's 70th birthday. For him, the day won't be much different from any other in recent memory, since he'll be spending it on the campaign trail. However, the Indian nationalist group Hindu Sena, who are big fans of Trump's message, will make up for Trump's lack of celebration with an extensive commemoration of their own.

Ultimately, the birthday has relatively little political significance, though it is a reminder that Trump—if elected—would be older on his day of inauguration than any other president, beating Ronald Reagan (69 years, 345 days when he took office) by 241 days. Hillary Clinton, who joins Trump to make up the oldest duo ever nominated by the two major parties, would take over second place on the list if elected, coming in just behind Reagan at 69 years, 144 days. If neither candidate has a health scare during the campaign, then their ages will merely be trivia. But in case of any fainting, stroke, heart arrhythmia, etc., it will become a major issue. (Z)