Suppose Sanders Got What He Is Asking for

Sen. Bernie Sanders (I-VT) knows that he can't get enough pledged delegates to win the Democratic nomination on the first ballot. There aren't enough states or delegates left. So his strategy has switched to trying to convince the party leaders and elected officials (the "superdelegates") to vote for him. His argument is that they should not subvert the will of the voters, and should vote as their states voted. Suppose he got what he is asking for. How would that work out? Let's look.

According to The Green Papers, Clinton has about 1,706 pledged delegates and Sanders has 1,419 pledged delegates. Other sources have slightly different counts because it is hard to predict the ultimate outcome of multistep caucuses. The Green Papers gives Clinton 501 superdelegates to Sanders' 41. If all those superdelegates stick with her, she will have 2,207 delegates, plus what she can pick up in the next month. She needs 2,383 to be nominated.

Now supposed Sanders gets what he is asking for: The superdelegates should go the way their states went. The table below shows how this would play out. 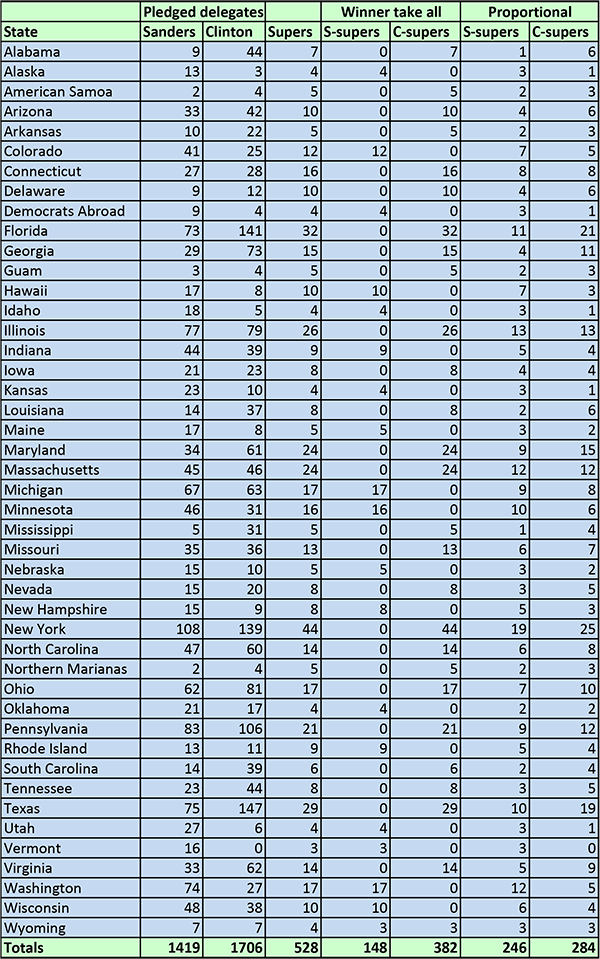 Columns 2 and 3 show the pledged delegates won so far by Sanders and Clinton, respectively. Column 4 is the number of superdelegates each state has. Columns 5 and 6 show what Sanders is asking for: the superdelegates vote for whoever won their states (winner take all). The result is that Clinton drops from 501 superdelegates to 382, a net loss of 119, but Clinton is still ahead by 521 delegates.

Once Sanders has realized this, he could opt for Plan B, allocating superdelegates proportionally. This could be proportional to the statewide vote, though the pledged delegates are not allocated that way, but by a mix of the statewide vote and congressional district votes. So let's allocate the superdelegates in proportion to the pledged delegates, as shown in columns 7 and 8. Now Clinton has only 284 superdelegates and a total of 1706 + 284 = 1990. It remains more than Sanders' 1,646, but closer. Still, he is almost 350 delegates behind in this scenario. What he really needs to do is ask the superdelegates in the states that Clinton won to go against the wishes of the voters in their states and vote for him. And that is a tough sell. (V)

Only a few weeks ago, Sen. Ted Cruz (R-TX) was scooping up delegates from right under Donald Trump's nose, even in states Trump had won. No more. The addition of veteran Republican operative and delegate wrangler Paul Manafort has changed that. Saturday and yesterday, Trump won more than half the delegates elected in four states: South and North Carolina, Virginia, and Minnesota. Trump's new-found success also applies to key committee positions. One of Trump's supporters was elected to the key Rules Committee. (V)

In a reversal from his earlier plans, Donald Trump now wants to increase taxes for the wealthiest Americans. He said that he has no problem paying more himself.

This new position may placate some voters, many of whom agree that taxing the rich is a good idea. But it also causes problems for Trump in two ways. First, it opens him to charges of flip-flopping. If he can change his mind on something as fundamental as tax policy, what else might he change his mind on? Second, there are few things that big donors consider more sacred than tax cuts for the rich. If Trump is even considering raising their taxes, why would big donors want to help him out? But Trump is going to need their support to raise a billion dollars, in order to match what Hillary Clinton is expected to raise. After all, even with this new (vague) promise to raise taxes on the rich, he is not going to get any traction at all with Democratic donors.

Trump has already said he has no intention of paying for the campaign with his own money (not that he could, since he doesn't have a billion dollars in cash or in assets that he can sell easily). This means he is going to need large numbers of contributions from small donors. While Trump draws large crowds at rallies, so far he has not been very successful at getting small donations. He has pulled in a total of $12 million so far, compared to Hillary Clinton's total of $229 million. That is going to have to change radically for him to be competitive. (V)

Palin Is Going to Try to Cantor Ryan

"Cantor" is now a verb, meaning "defeat a high-ranking Republican with a totally unknown tea party candidate." The genesis of this new word is the defeat of then-House-majority-leader Eric Cantor by unknown economics professor David Brat. Now Sarah Palin wants to try the same thing to defeat Speaker Paul Ryan (R-WI) in the Wisconsin congressional primary, throwing her weight behind political unknown Paul Nehlen. Palin is angry with Ryan because Ryan hasn't made up his mind whether he is going to support Donald Trump or not. Much of the rest of the Republican Party is angry with him for the same reason. All Ryan can hope for is that the fence he plans to sit on is made of smooth wood rather than barbed wire. (V)

Trump May Try to Stop Ryan from Serving as Convention Chair

There's a pretty good argument to be made that the two most important people in the Republican Party, at least at the moment, are Paul Ryan and Donald Trump. Since Ted Cruz and Gov. John Kasich (R-OH) dropped out, thus clearing Trump's path, the presumptive nominee and the Speaker have been engaging in a war of words in the press. The latest salvo from the Trump camp is that The Donald might push to have Ryan removed as Chairman of the Republican National Convention.

On one hand, Trump has a pretty good point—if Ryan is not 100% behind the party's nominee, he likely can't do the job he's supposed to do (given that the convention, these days, is largely a three-day, nationally televised rally for the candidate). On the other hand, it's rarely a savvy choice to move from attacking the establishment to needlessly provoking it. The Party may not be deciding in 2016 (sorry that your thesis is shot, Marty Cohen), but it still has a fair bit of influence over things like fundraising and data collection. Plus, Trump might eventually have need of a surrogate who is actually in office right now, as opposed to a former wrestler and a former basketball coach. The way he's going, he's not going to find many important Republicans who are willing to take his calls in October. (Z)

Compared to Bernie Sanders, Hillary Clinton is a warmongering corporate stooge, but compared to the Democrats in the Senate, she is actually quite progressive, according to a piece in the Huffington Post. If she were running against almost any other Democrat, that would be quite clear. Consider her positions on the issues and compare them to other Democratic politicians, not to Sanders, and that becomes more apparent:

Any Democrat running for the Senate with these positions is certain to be attacked by the Republicans as a far-out left-winger. During her time in the Senate, she was rated as the 11th most liberal member of the Senate. It is simply her misfortune to be running against someone more liberal than she is. If her main opponent was, say, Jim Webb or Martin O'Malley, she would be attacked for being too liberal, not for being too conservative. (V)

The Fight Is on for Married Women

Single women are strongly Democratic but married women are mostly Republican. Hillary Clinton's fate in November hinges to a fair extent on whether she can bring affluent suburban women into her camp. She is already trying hard by campaigning in Virginia's Loudoun County. As Loudoun goes, so goes Virginia, and as Virginia goes, so goes the nation is the idea. Loudoun is a mix of affluent, highly educated professionals, with a large percentage of married working women. They are not strongly ideological. Obama barely won the county in 2012, but Rep. Barbara Comstock (R) won in VA-10 (which includes Loudoun) in 2014.

Clinton is going to go after these voters with the argument that Trump is emotionally unstable and does not have the right temperament to be commander-in-chief. The county has many people who are either current or former service members or who work for defense contractors, and could be swayed by this argument. The county lies in between heavily Democratic Fairfax County and rural Virginia, which is heavily Republican. This is the kind of county that Clinton will be targeting the entire campaign. (V)

Obama Is Chomping at the Bit

Everyone knows that President Obama supports Hillary Clinton, but the niceties of politics dictate that he cannot say so openly until she is the nominee (or, at least, the presumptive nominee). Reportedly, he is counting the days until that happens, because he is eager to start tearing into Donald Trump.

This is Obama's last political campaign, and so a certain enthusiasm is to be expected. On top of that, major pieces of his legacy are on the line, including ObamaCare and the climate change accord. And, of course, he has not forgotten that Trump was one of the loudest "birthers." The President is one of the few Democrats who can match Trump in the charisma department, and he's the only Democrat who can command media attention in the way The Donald can. Once the handcuffs are removed, it should be a sight to behold. (Z)

The first four states to vote for presidential candidates—Iowa, New Hampshire, South Carolina, and Nevada—are meant to represent the four major regions of the country (the Midwest, the Northeast, the South, and the West, respectively). But after three elections as spokesman (spokestate?) for its region, Nevada may find itself stripped of its exalted status, at least on the Republican side.

In part, the change is prompted by Nevada's disastrous handling of all of the last three elections—confusion, low attendance, whispers about irregularities. And in part it is prompted by the desire to curry favor with a state of greater political significance—Colorado, perhaps, or Arizona. Thus far, the Democratic Party has been silent on the issue, but if the GOP jumps ship, they might do so too, for much the same reasons. Which means that the Nevada Board of Tourism may soon have to change their slogan: "What happens in Vegas, stays in Vegas, unless it's the early caucuses." (Z)