The most expensive House race in history is now over. What have we learned from it? The Hill has a list of five takeaways from the special election:

Fundamentally, GA-06 is a very Republican district and Democratic hopes that they could flip a seat that the previous incumbent won by 23 points were perhaps a bit unrealistic. One issue that is going to be fought over for months to come is that Jon Ossoff (D) got a lot of money from people who hate President Donald Trump, but he didn't make his campaign about Trump. In fact, he barely mentioned Trump at all. Some Democrats are already saying that if he had made opposition to Trump the centerpiece of his campaign, he would have won, but there is no evidence to support the notion that attacking Trump would have won him Republican votes. So Democrats will fight with each other until 2018 about strategy. (V)

While many Democrats are crying in their gluten-free organic beer after pouring $23 million into Jon Ossoff's GA-06 campaign and still losing by 4 points, David Wasserman over at the Cook Political Report has a different take on the five special House elections held so far this year. He points out that based on past elections, the Democrat should have taken a walloping in all of them, given the PVI of their districts. Actually, they did much better than expected in all of them, as shown below: 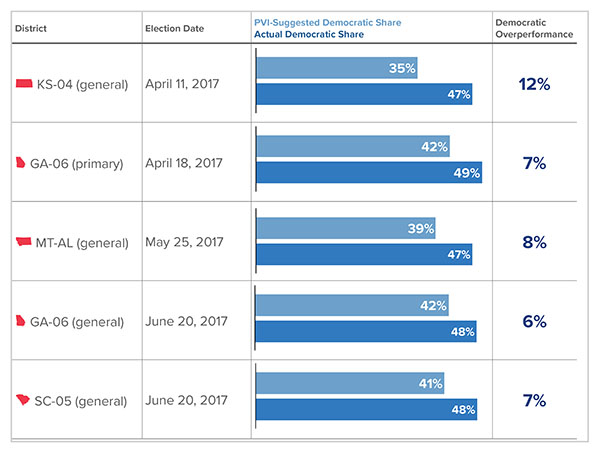 On the average, the Democrats did about 8 points better than the PVI indicated they should have done. If they pull that off in Nov. 2018, they will pick up 80 seats in the House. Of course that won't happen, because most of the 2018 races will be against well-known and well-funded incumbents, whereas all the special elections were open seats. That said, a lot can happen between now and Nov. 2018 that could shake everything up.

It is also important to realize that the special elections were called because Donald Trump appointed the former member to a position in his administration. Not surprisingly, he picked people in deep red districts, so the appointment wouldn't result in a lost House seat. As a result, all the battles were fought in heavily Republican territory. (V)

Some Democrats Are Calling for Pelosi's Head

Given the setbacks that the blue team suffered on Tuesday, many disappointed Democrats are out for blood. And House Minority Leader Nancy Pelosi (D-CA) is about as close to a leader as the Party currently has, so much of the wrath is directed at her. In fact, some of her colleagues think that the time has come for Pelosi to step down. Rep. Kathleen Rice (D-NY), for example, declared on Wednesday that, "We need leadership change. It's time for Nancy Pelosi to go, and the entire leadership team." Rep. Seth Moulton (D-MA) also slammed the Minority Leader openly, and it's probable that many others did so behind closed doors at a morning meeting of the House Democratic Caucus.

Are Rice, Moulton, et. al. right, or are they just venting? Well, let's look at the arguments on both sides. First, the arguments against Pelosi:

Now, the arguments in Pelosi's favor:

You don't get to be in Pelosi's position without learning to dodge a few landmines, so the current rebellion against her is not likely to go anywhere, especially since she's made it clear she intends to keep the reins of power firmly in hand. However, if the Democrats do not have a very good day on November 6, 2018, then she's surely done for.

Nevertheless, at some point Democrats might want to start thinking about younger leadership. The #2 House Democrat is Rep. Steny Hoyer (D-MD), who, at 78 is older than Pelosi. The #3 is Rep. James Clyburn (R-SC), who at 76 is younger than Pelosi, but not so much younger (4 months). Finally, we come to a young kid in the #4 slot, Rep. Joseph Crowley (D-NY), a mere stripling at 55. In contrast, the House Republicans are led by a relative baby, Speaker Paul Davis Ryan, Jr., who is a mere 47. Although some Democrats are going to try to blame Pelosi for the Georgia loss, her fundraising prowess is likely to keep her in the saddle until she decides she wants to spend more time with her six grandchildren. (Z & V)

Yesterday, we noted that Donald Trump, Jr. used Twitter to respond to Tuesday's election results with something other than dignity and class. True to form, his father followed suit after waking up on Wednesday morning, offering up this gloating tweet (among others):

Democrats would do much better as a party if they got together with Republicans on Healthcare,Tax Cuts,Security. Obstruction doesn't work!


Trump has managed to squeeze a lot of wrong into 140 characters; let's note some of the obvious problems:

Admittedly, critiquing Trump family tweets is a little like shooting fish in a barrel, but it's useful to remember every once in a while that Trump the businessman, Trump the reality star, Trump the candidate, and Trump the president are the exact same person, dignity of the presidency be damned. (Z)

Sen. Ron Johnson (R-WI) won a too-close-for-comfort re-election bid last year and, given the purple-to-blue hue of his home state, will likely spend his entire Senate career looking over his shoulder. In short, he's exactly the type of officeholder likely to be punished by voters if they lose their health care. Consequently, when asked about Senate Majority Leader Mitch McConnell's (R-KY) top secret health care bill on Tuesday, he explained that, "I'm going to need time, and my constituents are going to need time, to evaluate exactly how this is going to affect them." And if he doesn't get that time? "I can't imagine, quite honestly, that I'd have the information to evaluate and justify a yes vote within just a week."

This is bad news for McConnell. Already, Sens. Lisa Murkowski (R-AK) and Susan Collins (R-ME) were likely "no" votes because of cuts to Planned Parenthood. If Johnson joins them, then that's enough to sink the bill, even if we assume that no other senators have objections (a big assumption, indeed). Of course, McConnell could wait until Johnson is ready to vote "yes," but that time might not come in a couple of days. Every additional day affords the CBO and the private think tanks time to weigh in with their negative reports on the bill, and gives senators' constituents time to express their irritation.

And now, Senators other than Johnson are likely to drag their feet, because he has essentially given cover to GOP colleagues from blue/purple states who may prefer not to die on this particular hill, including Dean Heller (NV), Jeff Flake (AZ), Cory Gardner (CO), Roy Blunt (MO), Rob Portman (OH), and Pat Toomey (PA). McConnell may not like the idea of consulting with constituents, but he can hardly say so openly. So, the Obamacare replacement just suffered another setback. On the other hand, in private, McConnell is going to tell his caucus: "We have been promising to repeal Obamacare for 7 years. If we fail now, there will be hell to pay." That might do the trick. (Z)

Testifying before the Senate Intelligence Committee yesterday, Acting Deputy Undersecretary of Cyber Security Jeanette Manfra said that the Russian hackers targeted 21 states in 2016, a lower number than other sources have reported. Of course, if the Russians targeted only the top 10 swing states, that might be enough to change the results. Messing around with Idaho and Maryland, by contrast, doesn't help them much. Manfra incurred the ire of ranking Democrat Sen. Mark Warner (D-VA) by refusing to say which states had been targeted.

Manfra said that the U.S. system is resilient to being hacked because it is so decentralized. Sen. Angus King (I-ME) disagreed with her, saying that changing a small number of votes or disenfranchising a small number of voters in a few key states could do the job. For example, Donald Trump won Michigan by only 11,000 votes. If the Russians were able to hack the voter registration database and remove 15,000 voters from zip codes that vote heavily for Democrats, that could be enough to do it. Russia has denied any hacking attempts, but in his Senate testimony, former FBI Director James Comey said that he had no doubt whatsoever that the Russians had made a large-scale attempt to affect the election. (V)

U.S. To Send Arms to Ukraine

Ukrainian President Petro Poroshenko has been in Washington this week, meeting with President Trump. And on Tuesday, Poroshenko announced that his discussions with The Donald had borne fruit: The U.S. will be helping Ukraine to defend itself against Russia by selling them weapons and also with "military-technical cooperation." If Vladimir Putin really did intervene in the U.S. election in order to put Donald Trump in the White House, this is probably not what he had in mind.

Meanwhile, this situation helps to illustrate why so many are concerned about Donald Trump's ad hoc foreign policy—he does not appear to have any clear strategy, and seems to play both sides of the street, depending on what happens to be expedient at the moment. You cannot be on the side of Ukraine and on the side of Russia. You cannot be an ally of Qatar and at the same time denounce it as a sponsor of terrorism. You cannot rein Kim Jong-Un in while at the same time giving him a wide berth. You can't use force in Syria and decline to use force. All of these things have the potential to become slippery slopes, where the U.S. becomes more and more involved by inches, until stuck in the middle of an armed conflict, with no particular sense of purpose or endgame.

Sen. Ben Cardin (D-MD) made that very point in an interview with Politico this week. "There's many areas where there could be a miscalculation that could lead to a shooting war. In every one of those circumstances, the Trump administration has not given us a strategy," Cardin said. While the Senator is a Democrat, and so part of the opposition party, he's a hawkish Democrat and an expert on foreign policy as the ranking member of the Senate Foreign Relations Committee, so his words should carry some weight. He also reports that he's had many meetings with representatives of American allies in which they worried openly that the U.S. would abandon its commitments to them. He's also talked with representatives of repressive regimes who dismiss any criticism from Americans, pointing to Trump's behavior. For example, when Cardin pressed Zimbabwean dictator Robert Mugabe on his human rights record, Mugabe's response was to smile slyly and say, "How about Donald Trump?" There was hope that Secretary of State Rex Tillerson would serve as a counterbalance to the President, though that doesn't seem to have worked out thus far. (Z)

While there is some doubt whether a sitting president can be indicted, there is no doubt whatsoever about whether a sitting senator can be indicted. They can be and one recently has been. Sen. Robert Menendez (D-NJ) has been indicted for corruption and will go on trial in September. Jury selection began yesterday. Menendez is accused of taking a bribe of nearly $1 million to help a Florida doctor, Salomon Melgen, who overbilled Medicare by tens of millions of dollars. Melgen was convicted in April. Melgen also wanted Menendez's help in getting visas for three of his "girlfriends."