The Alabama Senate race is still close, although three polls released this week show Roy Moore (R) with a lead of 5-6 points over Doug Jones (D). These polls could be wrong, because turnout in special elections is often low and hard to judge. In particular, loyal Republicans who dislike Moore may decide not to vote or even to write in a candidate. Donald Trump is clearly nervous about losing a Senate seat, though, and is considering jumping into the race to help Moore. He is not planning to visit Alabama, where he is still fairly popular, but might flood the state with robo-calls, emails, and text messages. In contrast to Senate Majority Leader Mitch McConnell (R-KY), Trump doesn't believe the women who have accused Moore of molesting them as teenagers. McConnell is on record saying he believes the women. He has even gone as far as saying if Moore is elected, he will try to get him expelled from the Senate.

Trump is in a bit of bind, of course, because praising someone that most people think is a child molester doesn't go over well with independents or college-educated Republicans. If Moore wins and Trump takes a victory lap, what is he going to do if McConnell keeps his word and starts proceedings to expel Moore from the Senate? Is Trump going to defend Moore before the Senate Ethics Committee? How will that look? No doubt his base will just wave off Trump's defending a child molester as no big deal, but again, independents and college-educated Republicans may not take to this so well.

Coming out for Moore has another potential danger for Trump. If Jones somehow pulls this one out of the fire, it will be a(nother) message to all other Republicans that Trump's support or opposition isn't all that important. That could matter a lot if any important bills come up in 2018 and certainly during the midterm elections.

One strategy Trump could take is not to talk about Moore at all, but just hammer Jones as Nancy Pelosi in a suit with a Southern accent. He has already said that Jones is weak on crime, even though he was a U.S. attorney. That might be the safest approach. (V)

Has Alabama Lost Interest in the Moore Story?

Before the accusations of sexual misconduct, Roy Moore was way ahead of Doug Jones in the polls. During the period just after women began telling their stories about what he had done to them as teenagers, Jones shot ahead. Now the most recent three polls put Moore ahead again. That doesn't necessarily mean that Moore will win because turnout is crucial and people who tell pollsters they prefer Moore may end up not voting. Polling special elections is very difficult.

Still, it is interesting to look at why Moore might be making a comeback. Donald Trump's support may be helping somewhat, but it is also possible that people in Alabama are just losing interest in the story. FiveThirtyEight has produced a nice graph showing Google searches for Moore. The x-axis shows the number of days since the first allegations came out. The y-axis is normalized so that MAX is the number of searches on the days with the most searches for "Moore" in Alabama. 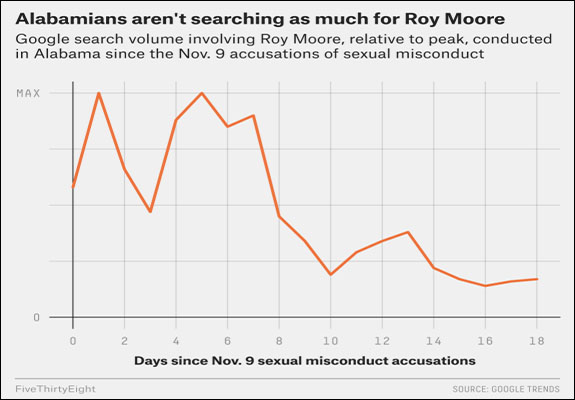 From the graph it is clear that searches for "Moore" are already down to about one-sixth of what they were. This could mean everyone already has found what they were looking for, but it could also mean that since there has been no news for a week, people have moved on. In the latter scenario, we are back to normal: Democrats vote for people with a (D) after their name and Republicans vote for people with an (R) after their name. Platforms don't matter. Policies don't matter. Advertising dollars don't matter. Being a child molester doesn't matter. And presumably being a mass murderer or war criminal wouldn't matter either. All that counts is that all-important letter. (V)

Perhaps Donald Trump is exploring exactly how far he can take his bigotry. Or maybe the cheese really is slipping off the cracker. Or maybe, some of The Donald's tried and true attention-getters are fading in effectiveness—the NFL may have solved its national anthem "problem," for example—and he's looking for new ways to grab headlines and fire up the base. These theories were all put forward on Wednesday, after Trump retweeted a series of extremely Islamophobic videos.

The three videos originated with Jayda Fransen, a far-right British politician who is sort of her country's answer to Geert Wilders or Marine Le Pen, except that she's been convicted of religiously aggravated harassment, and isn't actually a viable politician, given that her group cannot be listed on British ballots because they forgot to pay the £25 registration fee. Really, then, she's more of a David Duke or a Don Black. In any event, the three videos appear to show a group of Muslims pushing a boy off a roof, a Muslim destroying a statue of the Virgin Mary, and a Muslim immigrant hitting a Dutch boy on crutches. What they really are is a fight between two Egyptian gangs, an Al-Qaeda training video, and a fight between two Dutch citizens, respectively.

As we pointed out yesterday, Trump certainly seems to be flailing about as he tries to keep himself at the center of attention. And if he's got to turn to something this extreme when he needs his fix right now, what will he do or say or tweet in a year or three? (Z)

The government will run out of money on Dec. 8 unless something is done. Republicans in the House are planning a game of national chicken with a bill to fund the government for another month and dare Democratic senators to vote it down when the bill gets to the upper chamber. The Democrats have made it clear that they are prepared to shut the government down if the Republicans won't take action to protect the dreamers. By passing a stand-alone short-term funding bill, House Republicans would be challenging Senate Democrats to put their money with their mouths are and let the government shut down. All of this is a form of psychological warfare and it is far from clear how it might play out. (V)

Donald Trump Jr. to Testify before House Panel Next Week

The House Intelligence Committee will hear Donald Trump Jr. next week as part of its investigation of Russia's meddling in the 2016 election. In particular, they are interested in a meeting he had at Trump Tower with Russian lawyer Natalia Veselnitskaya. Junior has said all they talked about was adoption. E-mails show that he expected the Russians to give him dirt on Hillary Clinton, not discuss adoptions. Panel members want to hear Junior's version of the meeting.

Yesterday, the panel interviewed the translator who was present at the meeting, Anatoli Samochornov. One report says that Samochornov agreed with Junior that the only topic of discussion was adoptions. This has not been confirmed and doesn't explain the inconsistency this would entail between the emails that led Junior to expect dirt and that subject not even coming up. (V)

Kushner Talked to Mueller about Flynn

We may not quite have reached the "every man for himself" breaking point, but we certainly seem to be getting close. Last week, former NSA Michael Flynn's lawyers told Donald Trump's lawyers that their would be no further coordination between the two legal teams. Now, CNN is reporting that First Son-in-Law Jared Kushner met with Special Counsel Robert Mueller's team, and that the main topic of conversation was Flynn.

It's not certain what they talked about, of course, but several inside sources said that Mueller was trying to ascertain if Kushner was aware of anything that might "exonerate" Flynn. This would seem to imply that Flynn is in pretty deep, and that a plea deal of some sort may be coming soon. It would also seem to imply that at least part of the trouble he's in is Russia-related, since Kushner would not likely have privileged information about the former general's work for Turkey. At the same time, the news also raises a question: Why would Kushner aid Mueller in putting the screws to Flynn if Flynn's dirt is going to be used to put the screws to Kushner? Perhaps Mueller has even bigger fish in his sights than the First Son-in-Law. (Z)

On Wednesday, Attorney General Jeff Sessions (apparently) made official an arrangement that has been de facto in effect for several weeks: The Trump administration's new "opioid czar" will be Kellyanne Conway. She is eminently qualified for the job, in the same way that Betsy DeVos is eminently qualified to lead the Dept. of Education. Specifically, Conway's CV includes zero science background, zero background in psychology or medicine or public health, and zero expertise in drug use or drug addiction. On the other hand, she has the same degrees—BA in Poli Sci, JD—as Jared Kushner, whom she is presumably succeeding as the White House's point person on this particular issue. Now he can devote all his time to reorganizing the federal government and bringing peace to the Middle East.

What to make of this latest rearranging of the deck chairs on the Titanic? Four theories present themselves:

In any event, what we have here is someone with no relevant knowledge trying to tackle a nearly-intractable problem with limited staff and financial support. Those waiting for the end of the opioid epidemic should not hold their breath. (Z)

Two Republicans have already filed to run in the West Virginia Republican primary for the right to challenge Sen. Joe Manchin (D-WV). They are Rep. Evan Jenkins (WV) and West Virginia Attorney General Patrick Morrisey. Now a third one is jumping in. He is Donald Blankenship, the former CEO of Massey Energy, who is extremely well known in West Virginia. However, part of his fame is due to the fact that he served a year in prison for conspiring to violate mine safety standards, which led to an explosion in one of his mines. Twenty-nine miners were killed in the explosion.

Blankenship is obviously pro-coal, which is a plus in West Virginia, but he represents management, not the miners. The other two Republicans are also pro-coal, as is Manchin. Blankenship is very wealthy, so there could be a nasty primary, which only helps Manchin. (V)