Guess Who Is Hit Hardest by Trump Ending Subsidies?

The Associated Press has had enough time to crunch the numbers, and to figure out which voters will be hardest hit by President Donald Trump's decision to kill the Obamacare subsidies for low-income people (assuming he is successful). And, in a development that is not the slightest bit surprising, the answer is: The voters who cast their ballots for Donald Trump. Almost 70% of the impact will be felt in states that he won. In fact, of the 10 states that collected the most in Obamacare subsidies, only Massachusetts did not give its electoral votes to The Donald. 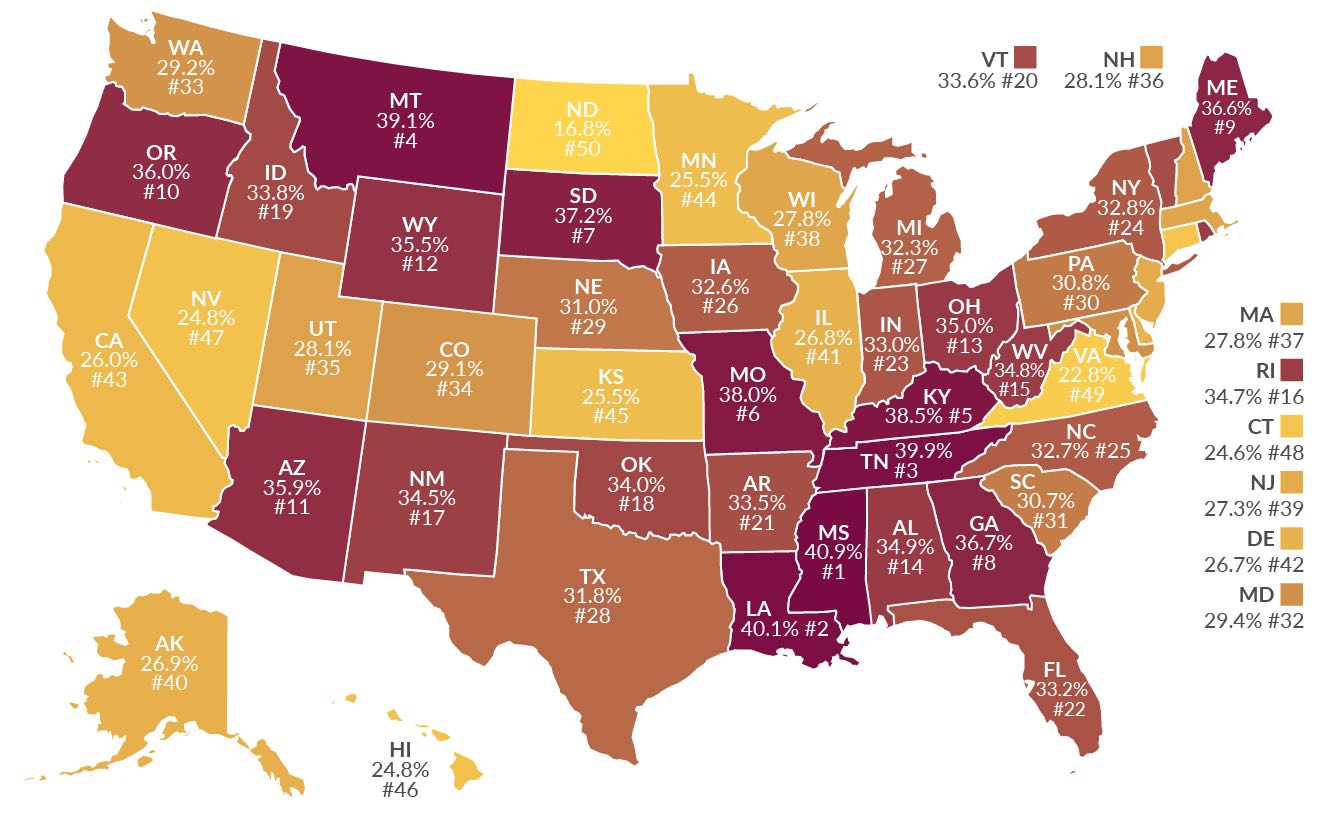 The darker the state is, the more of its budget comes from the feds. And of the 15 states most reliant on the federal government, 13 went for Trump (with Oregon and Maine being the exceptions). What it amounts to is that whatever aid or welfare program Trump tries to cut, he is almost certainly going to hit his voters harder than Hillary Clinton's voters. There is some irony, then, in the fact that it is blue-state attorneys general that will lead the charge to save the subsidies. Still, GOP politicians, particularly the ones up for reelection in 2018, are surely aware of this demographic problem. So, it's still well within the realm of possibility that many of them join with the Democrats to save the subsidies and make them permanent. (Z)

When it comes to fiscal policy, there are very few things that the vast majority of economists agree upon. However, one of those rare areas of consensus is their general agreement that trade pacts are a net benefit for all nations involved. Assuming the economists are right, then Donald Trump's decision to kill the Trans-Pacific Partnership (TPP) was bad news for all signatories, including the United States.

It is already becoming clear that the economists are right. Japan is America's fourth-biggest trade partner, behind China, Canada, and Mexico. They have grown weary of talking trade with Donald Trump: his constant threats, his seemingly poor understanding of the subject, and his notion that America's needs are the only ones that matter. The Japanese also disapprove of the President's decision to kill the TPP. As a result of all of this, they have begun to negotiate with other nations to acquire the goods that previously have been imported from the United States, like pork, corn, lettuce, many fruits, and the like. They've already got a deal with the European Union, and may even rebuild the TPP, just without the United States (though they will welcome the U.S. should there be a change in policy, which would actually be a pretty exact repeat of what happened the last time).

Of course, as the Japanese (and other countries) look elsewhere, it means that American producers are going to take a hit. Actually, that should not be future tense, because they are already taking a hit. For example, pork exports to Japan dropped 9% in August. That is bad news under any circumstances, but making it worse is that producers had expected and planned for an increase due to the lower tariffs called for by the TPP. And which candidate did eight of the 10 largest pork-producing states vote for in 2012? Let's just say that there's a pretty strong correlation between pork production and Obamacare subsidies (see above). It would seem to be another case of someone not bothering to consider the impact of his policies. (Z)

As part of the Trump administration's efforts to prop up Virginia gubernatorial candidate Ed Gillespie, Mike Pence held a rally on Friday in the reddest part of Virginia and virtually nobody came. No official tally has been released, but pictures suggest the crowd numbered in the hundreds, and not that many hundreds at that. Put another way, the crowd size was more apropos to a high school track meet, a band performing at a county fair, a single showing of a moderately successful movie during opening week, or a Los Angeles Chargers game.

The point here is not to kick Pence while he's down, it's to point out that while he may think of himself as Donald Trump's natural successor as leader of the GOP, he is fooling himself. Pence has many of the liabilities that Trump has: Policy positions that lack broad support, more than a few questionable incidents in his past, and many, many enemies. And, at the same time, Pence lacks most of Trump's strengths. Though a former radio talk show host, he doesn't have The Donald's star power. The Veep is not terribly good at stirring the pot, as his clumsy Colts game protest showed. He doesn't inspire fierce loyalty from the base. And he's probably not willing to say whatever comes into his head in order to curry support. In short, Pence should think twice before placing a bulk order for "Mike 2024" (or "Mike 2020") bumper stickers. (Z)

Reconciliation Has Been a Disaster

Under the headline, "The Rule That Broke the Senate," Politico's Jeff Davis has a very interesting piece about the history of budget reconciliation. The procedure was first created in 1974, and was meant to give legislators a short window (two weeks) to make small, short-term tweaks to the budget in order to get it past the finish line. Almost instantly, the process was subject to abuses, and now both parties have helped to distort reconciliation beyond all recognition. The whole piece is worth reading, but the upshot is that a process that was once meant to resolve gridlock now serves to guarantee gridlock, since it affords the party in power (particularly if they hold Congress and the White House) an option that does not require compromise or discussion with the opposition party.

But while Davis outlines the many and varied problems with reconciliation, he is not so naive as to call for it to be abolished. The problem, of course, is that the majority party would have to choose that path, at exactly the time that reconciliation is one of the most powerful tools in their arsenal. It would be like asking someone to vote for gun control while someone is breaking into their house. So, the procedure might be a disaster that is being utilized in ways never intended 43 years ago, but it's with us to stay. (Z)

The Emoluments Clause of the Constitution forbids the president from accepting gifts or cash (a.k.a. bribes) from foreign governments. There are a number of people who think that Donald Trump, who continues to own his various businesses, and so collects money from many agents of foreign governments, is violating the Clause. So, there have been a number of lawsuits filed, and there are likely to be more. The first of these will begin oral arguments this week.

The case, being heard in federal court in New York, is being brought by Citizens for Responsibility and Ethics in Washington and several other left-leaning activist groups. The current situation—billionaire president who refuses to divest himself of his business interests—is completely unprecedented, and was never imagined by the Founding Parents. So, what happens in this case is anybody's guess. However, there are a lot of different courts in the country, and Trump has exposed himself to litigation in many different ways, so there's certainly a very good possibility he gets an unfavorable ruling eventually. Exactly what that might mean is also anybody's guess. Years of appeals, dragged out until Trump is out of office? Forcing the sale of his properties? Forcing his resignation or removal from office? Who knows? The only prediction we can make with any degree of confidence is that this is eventually going to end up at the Supreme Court, where it will probably be decided by the most powerful man in the country, namely Anthony Kennedy. (Z)

It's a very strange time when something like this is even possible, but Axios decided to have their staff comb through all of Donald Trump's tweets to see whom he attacks the most. The highlights:

Not too many surprises here, but clearly Senate Majority Leader Mitch McConnell (R-KY) and the Washington Post have some work to do. (Z)

The Right Strikes Back

There have been a number of high-profile elections in Europe in the last year or two in which right-wing, often anti-immigrant and xenophobic, politicians have threatened to claim real power. These forces had major success in Germany recently, and moderate success in the UK, but were rebuffed in France and the Netherlands. On Sunday, the right wingers scored their biggest victory of all, with the conservative People's Party, led by 31-year-old Sebastian Kurz, claiming a plurality of the seats in Austria's parliament. They are expected to join with the right-wing populist Freedom Party to form a governing coalition.

Kurz's victory makes clear the salience of anti-immigrant politics, as that was the main issue (and, in essence, the only issue) litigated in this particular election, and—not coincidentally—in a country that absorbed more Syrian refugees than any other. Beyond that, however, it's hard to suggest that Sunday's result presages anything larger for European politics. Austria has historically been more comfortable with the far right than most other countries, from Adolf Hitler (Hometown: Braunau am Inn, Austria) to the staunchly right-wing government they elected 18 years ago. And while Kurz is certainly anti-immigrant, he's not as ultra-rightist as some media are making it seem. So, this is not exactly an earth-shattering moment; certainly less significant than if Marine Le Pen or Geert Wilders had triumphed in their respective countries. (Z)