•  Interior Secretary Is Out
•  Harris in Deep Trouble in NC-09
•  7-Year-Old Dies in Custody
•  The Koch Network Is Fading
•  Weekly Standard Is No More
•  Democratic Presidential Candidate of the Week: Amy Klobuchar


Interior Secretary Is Out

Most presidents generally manage to appoint a cabinet that is largely on the up-and-up. And among those who could not pull off the trick, it was largely one rotten apple that tainted the whole bunch. Buchanan's Secretary of War John B. Floyd, who basically made it as easy as possible for the Confederacy to secede, by scattering government munitions around so they could be captured. Grant's Treasury Secretary George S. Boutwell, who lined his pockets (and then some) during the Crédit Mobilier scandal. Reagan's Defense Secretary Caspar Weinberger, who arranged the illegal sale of arms to Iran. Harding's Secretary of the Interior Albert Bacon Fall, who set up a sweetheart oil deal for tycoons Harry F. Sinclair and Edward L. Doheny.

It's going to be pretty tough for future historians to decide which member of Donald Trump's cabinet was the most shady, because there are at least a half a dozen secretaries competing for that honor. In just about any other administration, former HHS Secretary Tom Price, HUD Secretary Ben Carson, former EPA Administrator Scott Pruitt, former AG Jeff Sessions, or Secretary of Education Betsy DeVos would easily take the notoriety crown. In this administration, however, they are just one of the gang. It is really quite fitting that "congregation" can describe a group you might find in a Christian church...or in a swamp.

One thing we can say for certain, however, is that Trump has his very own version of Albert Fall in Ryan Zinke. This is yet another interior secretary who tried to use his official position to set up sweetheart oil and land deals for his buddies. The major difference is that Fall's dealings mostly involved oil in Wyoming, while Zinke's involve Montana. So, we're talking places almost 400 miles apart (Teapot Dome, WY to Bozeman, MT, as the crow flies).

It would appear that Zinke pushed his luck a little too far, however, because he's out of a job at the end of the year. The Secretary insisted that he is innocent of all the charges that have been made against him, and that all the evidence thereof is fake news, but explained that he just doesn't have the time, money, and energy to defend himself. The truth, however, is that Zinke did such a poor job of covering his tracks that he would be the easiest of easy targets for investigations by the incoming Democratic House. The Trump administration does not need to leave the blue team with a free throw to get started, so Zinke was advised to resign or else he would be fired. It was Chief of Staff John Kelly who reportedly swung the ax; that is presumably the last time. From now on "Mick the Knife" Mulvaney, the incoming acting chief of staff, will wield the axe.

Trump says he will announce Zinke's replacement sometime in the next week. Deputy Interior Secretary David Bernhardt is a leading contender, as is outgoing Sen. Dean Heller (R-NV). Meanwhile, the incoming chair of the House Natural Resources Committee, Rep. Raúl Grijalva (D-AZ), will just have to find someone else to investigate for now. (Z)

Harris in Deep Trouble in NC-09

Slowly but surely, Republicans and Democrats are moving toward a consensus that a do-over of the House election in NC-09 will be necessary. The chicanery that was undertaken in order to score a razor-thin victory for Republican Mark Harris was so obvious and so dubious that a bipartisan elections board (4 Republicans, 4 Democrats, 1 Independent) has thrice refused to certify the results.

It may seem, then, that the bad news for Harris is that he's going to have to run another campaign, and try to win the election legitimately this time. But it's actually worse than that for him. This week, it was revealed that the would-be Congressman was directly involved with the hiring of "dirty tricks" operative McCrae Dowless, who was responsible for most of the illegal activity that took place. This hire was made despite the fact that Dowless is a convicted felon, and that Harris was warned repeatedly against using his "services."

Anyhow, Harris is now so badly compromised that the North Carolina GOP thinks he's a liability. And so, the GOP-controlled state legislature hastily passed a bill this week that requires a re-do election to include a re-do primary as well. Their goal, of course, is to get some other Republican onto the ballot, because Harris would be a big underdog if he runs again. Interestingly, this could have the effect of resurrecting the career of Rep. Robert Pittenger (R-NC), who was knocked off by Harris in the original primaries. Anyhow, a final decision about a new election is expected sometime next week. (Z)

Last week, a 7-year-old girl from Guatemala was taken into custody by the Border Patrol. She said she was not feeling well, but did not get medical attention until she started having seizures 8 hours later. By then, her body temperature was at 105.7 degrees, in large part because she had gone multiple days without food or water. She was taken to a hospital, but it was too late, and she died of exhaustion and dehydration.

So, what was the Trump administration's response? Here are some possible options:

It was the last one, as you might have guessed, which is entirely consistent with an administration that never admits fault, and that generally sees the lives of people who are not white and/or not American as being considerably less valuable than those of people who are white and American (i.e., the base).

Team Trump is, of course, hoping that this will soon be forgotten, which is certainly a possibility given how many scandals emerge from this White House on a weekly basis. On the other hand, a lot of people are very unhappy about what happened, and see the victim, Jakelin Caal Maquin, as an embodiment of how inhumane and thoughtless the administration's border policy is. One recalls the picture of the 2-year-old Honduran girl that came to be a symbol of the family separations at the border. So, it's also possible that Maquin becomes the next David Hogg (gun violence), Khizr Khan (gold star family), or Serge Kovaleski (disabled reporter), and hangs around to haunt the administration for months or years. (Z)

The Koch Network Is Fading

Charles and David Koch have been big-time Republican movers and shakers for several decades; the amount of money that they and their network of donors has dumped on the GOP totals in the billions of dollars. In just the last cycle, in fact, they set aside $400 million (though it's not clear they spent all of it, since final figures are not in yet).

However, the 2018 cycle could well mark the beginning of the end for the Kochs' outsized influence on the Republican Party, for a trio of reasons. The first is that the GOP's move in a populist direction has moved it pretty far away from the libertarian sensibilities of the Kochs and many of their supporters. In particular, the Kochs do not approve of tariffs and trade wars, or of the Trump administration's policies on immigration. Meanwhile, the GOP may struggle to hang on to two of the Kochs' bread-and-butter issues, namely cutting taxes on the rich and global-warming denial, for much longer, given the way political currents are trending.

The second reason is that the long-time leaders of the Koch network are nearing the ends of their runs. The two billionaires who founded it and led it for nearly 30 years, Charles and David, are not exactly spring chickens. The 78-year-old David is in poor health and, at risk of being indelicate, is suffering from several issues that mean he may not make it to the next election. Charles, at 83, is in better health, but is still slowing down.

And that leads us to the third and final reason: The brothers' heir apparent, 41-year-old Chase Koch. While Chase shares the libertarian sensibilities of his father (Charles) and uncle (David), he does not really share their interest in advancing their goals through the political process. He's much more interested in philanthropy and innovation, and to the extent that he gets involved in politics, it's mostly programs and initiatives that might attract bipartisan support. In other words, Chase Koch is something of a right-leaning Bill Gates.

Needless to say, some of the folks who have made up the Koch network are not entirely on board with the changes that are underway. A few like Trumpism just fine, others are not so interested in spending their money on philanthropy. Undoubtedly, some of these people will continue to support the GOP on an individual basis, or as part of some other network. However, the days of the Koch machine being perhaps the most important engine in Republican politics appear to be coming to an end. (Z)

Weekly Standard Is No More

Speaking of emblems of a past incarnation of the Republican Party, The Weekly Standard announced this week that it is shutting down. Its last issue, in fact, will be released tomorrow.

Founded 23 years ago by dyed-in-the-wool conservatives Bill Kristol and Fred "The Beadle" Barnes, the magazine was an important platform for Republican voices, originally in the mold of the George H. W. Bush wing of the party, though it veered in more of a neoconservative direction in recent years. In other words, it evolved from a Bush Sr. kind of publication to a Dick Cheney kind of publication. Either way, the magazine's editorial philosophy had relatively little in common with Trumpism, and so they have been pretty consistent in their criticism of the candidate/president over the past several years. It turns out that there is no room among the right-wing media, another wholly-owned subsidiary of the Trump Organization, for an anti-Trump outlet. And so, the Standard is no more. That leaves the Daily Wire as, very probably, the most prominent conservative outlet that's willing to poke Trump in the eye. However, they only do it on occasion, and even then it's mostly very gentle. (Z)

We're running out of frontrunners, or near-frontrunners, which means we may soon have to start examining the merits of Oprah Winfrey or The Rock. Today, however, it's one of the final top-tier candidates we haven't gotten to. 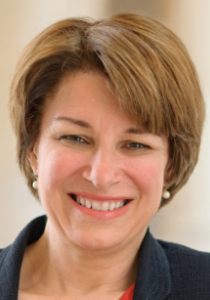