•  Mexico Will Reportedly Hold Refugees
•  Trump Tried to Bury Global Warming Report, Got Burned
•  Mitt Gets to Work
•  Espy Within Striking Distance
•  Congress Is Going to Have a Busy Month
•  Democratic Presidential Candidate of the Week: Eric Swalwell

According to reporting from the Washington Post and others, the Trump administration has reached tentative agreement with the incoming presidential administration of Andrés Manuel López Obrador (aka AMLO) that people seeking asylum in the United States will be detained in Mexico rather than the United States while their cases are resolved. The name of the plan is..."Remain in Mexico." Clearly, the creative juices were flowing on the day they came up with that.

The Trump administration's motives here are very clear. This will allow them to get around rules that place limits on the domestic detention of asylum-seekers, particularly children. At the moment, the U.S. government has 14,000 minors in its charge, a record number. Requiring asylum seekers to remain in Mexico will also reduce the number of people who attempt to make the move (since Mexico is more dangerous than the U.S.), and will allow Donald Trump to proclaim a victory. Of course, it will also make it much harder for him to use immigrant caravans to whip voters into a frenzy in 2020. Not that he won't try, of course.

The motives of Team AMLO are a little less clear, particularly given that AMLO ran an anti-Trump campaign, calling him a "neo-fascist." The folks negotiating on AMLO's behalf say that the new agreement simply formalizes the existing status quo, since many asylum seekers end up hanging out in Mexico, anyhow. That doesn't exactly pass the smell test, though. After all, if that was true, why would 14,000 children be in U.S. custody right now? Presumably there is some other motivation. And since neither side seems to be sharing what that motivation is, it's likely something that would not look good from a PR standpoint. For example, one wonders if there won't be some sort of cash payment made from the U.S. to Mexico, a detail that Trump would prefer not become public? Or some sort of trade concessions, which would be similarly bad for the "America First" Trump to admit to?

What we do know, however, is that voters in Mexico are none too happy. Given AMLO's frequent criticism of Trump, and specifically his criticism of Trump's border policy, the Mexican people are not pleased that the first thing he (allegedly) plans to do on taking office is help out Donald Trump. Given the backlash, which emerged rapidly and with much volume on Saturday, Team AMLO is already backtracking, saying that they have not agreed to anything, and that they don't support the plan. So maybe nothing comes of this, after all. (Z)

As we noted yesterday, the Trump administration was required to release an extensive report on global warming. The report was full of doom and gloom, and ran 100% contrary to the President's "What, me worry?" position on the issue. So, Team Trump tried to sneak it in under the radar, releasing it on Black Friday, while hundreds of millions of Americans were recovering from Thanksgiving, shopping, and/or watching college football.

Of course, it didn't work. The attempt to bury the report was so hamfisted and obvious that the administration's maneuvering became a story unto itself. Democratic (and independent) politicians certainly weren't too busy with their post-Thanksgiving activities to comment on it. For example, Sen. Bernie Sanders (I-VT):

The Trump administration tried to bury a new report about the devastating consequences of climate change.

Why? Because Trump's actions are actively making it worse.

Our task is clear. We must immediately and dramatically reduce carbon pollution emissions. https://t.co/4dhk4qUdzn


Environmentalists also piped up. For example, climate scientist Philip Duffy, who said, "Obviously, they timed the release to get the minimum visibility."

The report itself has given the Democrats plenty of ammunition to work with. And given that the members of the blue team know for certain that Trump is embarrassed by the contents, it makes them all the more certain that they've got a winner. "Rather than hiding the facts, President Trump should heed the message of our nation's preeminent climate scientists and experts," said Rep. Frank Pallone (D-NJ), who will chair the House Energy and Commerce Committee. "The days of denial and inaction in the House are over as House Democrats plan to aggressively address climate change and hold the Administration accountable for its backward policies that only make it worse." Rep. Eddie Bernice Johnson (D-TX), who is expected to chair House Science Committee, issued a statement in which she said the time has come to look seriously at the wildfires, devastating storms, coastal flooding and toxic algae blooms that hit much of the U.S. this year. "That is why I have made climate change one of my top priorities for the Committee going in to the next Congress," she noted.

In short, not only is the 2020 campaign already underway, but the main issues of the campaign are already taking shape. (Z)

Mitt Gets to Work

It's still something of a mystery as to why Mitt Romney ran for the Senate. At 71 years of age (and 72 in March of next year), he's getting a little long in the tooth for a body where it takes 15-20 years to gain any real power. Unless he plans to serve into his late eighties or his nineties, then it's an unusual way to spend what are supposed to be his golden years.

The new Congress hasn't even met, however, and Romney has already hit the ground running in a manner that certainly hints at what his plans are. He's not working on legislation, or securing plum committee assignments, or constituent services, though. Nope, he's doing what Mitt does best: raising money. On Tuesday, in fact, he'll be hosting a swanky $5,000-a-plate fundraiser meant to stock the bank account of Believe in America PAC, his newly-formed political action committee. He's also formed a joint fundraising committee called Team Mitt. Given that Romney has six years before he has to think about getting re-elected (if he's actually running again), and given that he can self-fund if he really wants to, it is clear that the Utah Senator-elect is planning to assist favored candidates with their campaigns in 2020.

Exactly what the broader plan is remains unclear, but there are really only two possibilities. The first option is that Romney is trying to reclaim the GOP from Donald Trump, one candidate at a time, by supporting more "traditional" Republican officeholders. The second is that he's planning another presidential run, either in 2020 (at age 73), or in 2024 (at age 77). Either seems like something of a fool's errand, but "out of touch" is sort of Mitt's calling card, so this is not entirely out of character. (Z)

In about 48 hours, Mississippians will head to the polls to resolve the last remaining U.S. Senate race. This is a byproduct of the fact that the seat came open due to Thad Cochran's resignation, which means that what happened on Nov. 6 was, in effect, a primary, due to The Magnolia State's unusual procedures for filling a vacant U.S. Senate seat.

The current (appointed) occupant of the seat is Sen. Cindy Hyde-Smith (R), who should have no trouble winning the seat outright, given that Mississippi went for Donald Trump by 18 points, and that the state hasn't elected a Democrat to the Senate since 1982, in a time when "Southern Democrat" really meant "Republican." However, Hyde-Smith's jokes about "public hangings" and her other gaffes have invigorated the state's black voters and made a contest out of it. There hasn't been much in the way of public polling, but internal GOP polls have Hyde-Smith up over Mike Espy (D) by as few as five points. Given that internal polls almost always skew in the direction of the party that conducted them, that means that Hyde-Smith's actual lead is probably more like 2-3 points—aka, within the margin of error.

Of course, those polls cannot account for last minute developments that could push the contest in one direction or the other. For example, Donald Trump is scheduled to hold a couple of rallies on the Senator's behalf. Presumably that will help her a bit, but who really knows for sure? Maybe it will serve to gin up the opposition instead. What certainly won't help Hyde-Smith is further digging into her past, such as Saturday's revelation that she attended a private school hastily set up by white parents so as to avoid integration. She is still the favorite, if only because the fundamentals of the race favor her so heavily. But she's not a slam dunk anymore, and even if she wins, she's going to have to spend Tuesday sweating. (Z)

Congress Is Going to Have a Busy Month

Sometimes a lame duck Congress takes the hint, and starts its Christmas vacation early. That will not be the case this year, however, for at least a couple of reasons. The first is that this is the last month that the GOP will be in control of the House for at least two years, and very possibly more than that. The second is that, in failing to get things done prior to the election, the members now have a backlog. Here's a rundown of the major things they have to grapple with:

In theory, Congress has only 12 more days in session this term, though they can extend that if Speaker Paul Ryan (R-WI) and Senate Majority Leader Mitch McConnell (R-KY) decide to do so. Whatever happens, it should be a month of high drama for the legislature. (Z)

Few 2020 candidates have formally declared, as yet, but this week's selection has his hat more fully in the ring than just about anyone. 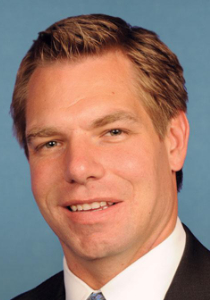