Donald Trump rallied in Nevada last night, and afterwards he chatted with reporters. During that confab, the President casually noted that Rep. Kevin Brady (R-TX) and House Speaker Paul Ryan (R-WI) are working on a "major tax cut for middle income people" in the next couple of weeks. "If we do that, it will be sometime just prior, I would say, to November," Trump said.

One can never tell if Trump grasps the implications of his words or not, but this news is tantamount to announcing two things. The first is an admission that the original tax cut, which was advertised as being "for the middle class," was not. The second is that the GOP has officially realized that voters didn't buy the spin, and the Republicans would now very much like to use the government's money to purchase people's votes in the form of yet another hastily-passed tax "reform."

It is nearly inconceivable that anything will actually happen before the midterms. First of all, there just isn't much time left. Second, Congress isn't even in session, having adjourned so members can campaign. And even if Ryan and Majority Leader Mitch McConnell (R-KY) call their colleagues back into session (after all, that pair has no need to campaign right now), it is very hard to believe they can find the support to quickly pass another massive giveaway, in view of this week's news about the exploding deficit. After all, if you start giving big handouts to the wealthy, and corporations, and the middle class, that leaves you balancing the budget on the backs of the poor, and poor people vote.

Trump may or may not be savvy enough to grasp the realities here, but Paul Ryan certainly is. So, if he really is working on some sort of last-second tax bill, he must have one of two goals in mind. Either he wants to call Congress back into session and force Democrats into an unpalatable vote right before the midterms, or he wants to telegraph to the voting public: "Keep Congress Republican and you will get free money." We shall soon see if Trump was speaking truth, or if he was just talking out of some other part of his body. (Z)

U.S. To Pull out of Nuclear Treaty with Russia

The Trump administration had a busy day on Saturday. In addition to the presidential rally, they also announced that the U.S. will pull out of the Intermediate-Range Nuclear Forces Treaty. Asked to explain the move, Donald Trump said:

Some folks will be pleased to see the administration standing up to Vlad Putin. It's actually something of a surprise, especially since—despite Trump's slam on Barack Obama—the treaty was actually negotiated by St. Ronnie in 1987 (well, he signed it, at least). The unhappy news is that this particular instance of standing up to Russia will not make American elections stronger, or keep the Russkies from grabbing territory that is not theirs. No, it will have the effect of increasing the world's supply of weapons of mass destruction, which is not exactly an optimal outcome.

If that were not enough, the United States Permanent Representative to NATO, Amb. Kay Bailey Hutchison has warned that the U.S. is going to respond to Russia's illegally-constructed missiles by "taking them out." That seems dangerously close to threatening a nuclear war against the Putin regime. When asked to clarify, Hutchison said that "take out" did not mean "attack," but she could not explain exactly what it did mean. Half a century ago, that kind of careless verbiage about nuclear weapons blew up in Barry Goldwater's face, and helped assure his crushing defeat at the hands of Lyndon Johnson. These days, it will presumably blow over by the time the weekend's out. (Z)

Georgia Secretary of State Brian Kemp (R) has spent much of his time in office making certain to erase certain kinds of voters from the rolls. Yesterday, we noted that at least 600 absentee ballots, primarily from the very diverse Gwinnett County, had been tossed in the garbage for dubious reasons. And last week, we pointed out that 53,000 new voter registrations had been flagged on the judgment of Kemp's staff, with 70% of those belonging to black folks. So, something's rotten in the state of...well, Georgia.

On Saturday, however, came news that the issue may be vastly more extensive than suspected. Like many states, Georgia has laws that govern the removal of inactive voters from the rolls. In their particular case, voters who have not cast ballots for three years receive a letter warning them that their registration is in jeopardy. If they do not respond, and they do not vote in either of the next two general elections, then they are purged. Generally speaking, this is a fairly reasonable means of dealing with the fact that when people die, change residences, etc., they (or their executors) rarely notify the government.

The issue in Georgia, according to an investigation by journalist Greg Palast, is that of the 534,000 voters who were purged under the terms of the Georgia law in the last two years, more than 340,000 of those still live at the address at which they were registered. There are only two ways to explain this. The first is that an enormous number of people failed to respond to their legally-mandated warnings, and also failed to cast a single vote for four years. The second is that they were purged inappropriately.

Palast has not released any demographic data about those who were purged, but he did imply that they were disproportionately black, which lends credence to explanation #2. It is the case that, barring some sort of court intervention that overturns the expurgation, folks will be able to cast provisional ballots. However, the decision as to which provisional ballots to accept, and which to reject, will be made by...the office of Brian Kemp.

Of course, Kemp is just following the lead of his party's pooh-bahs. That includes the fellow in the White House, who tweeted this on Saturday:

All levels of government and Law Enforcement are watching carefully for VOTER FRAUD, including during EARLY VOTING. Cheat at your own peril. Violators will be subject to maximum penalties, both civil and criminal!


Many people, quite reasonably, interpreted that as a none-too-subtle attempt at voter intimidation. But, once again, Trump does not appear to have thought through the implications of his words. First, if he and/or his administration end up in a lawsuit about their voter suppression behavior—with, say, a Democratic-controlled House as plaintiffs—this will be prosecution exhibit #1. Second, if the GOP takes a thumping in November, Trump won't exactly be able to fall back on his 2016 excuse of "all the illegals voted!", since that would be tantamount to admitting that his team is incompetent. (Z)

Gov. Bill Walker (I-AK) is the only independent governor currently in office. He got there because, during his first run in 2014, there was no Democratic candidate. So, he was able to cobble together a coalition of Democrats, independents, and moderate Republicans and eke out a narrow victory (48.1% to 45.9%). This year, however, there is a Democrat, in the form of former U.S. Senator Mark Begich. Neither Begich nor Walker had much chance against Mike Dunleavy (R) as long as they were both in the race, so it was something of a game of chicken to see which would be the one to drop out.

Recent events served to end the game of chicken. Earlier this week, Walker's lieutenant governor and running mate, Byron Mallott (running as an I, but registered as a D), resigned from both his job and the campaign. The story remains hazy, but Mallott reportedly made "inappropriate overtures" to a woman. Who, and when, and of what nature are questions that are all unanswered. Anyhow, the scandal sucked Walker in, and so caused him to throw in the towel on Saturday.

On his way out the door, Walker asked his supporters to transfer their loyalty to Begich, as he will be "far better" for Alaska than Dunleavy. Dunleavy's campaign manager was outraged, and declared, "Governor Walker could have chosen a dignified, graceful exit to his campaign. Instead, he opted to bow out with a bitter, partisan attack on Mike Dunleavy." It actually sounds like an endorsement to us, and Dunleavy has noted plenty of the ones he's gotten on his campaign webpage. In any case, both Walker and Begich were around 24% in the polls, with Dunleavy around 45%, so if the Walker voters all switch to Begich, he will be in good shape. For what it is worth, the handful of polls conducted with the supposition that Walker would indeed drop out suggest that Begich can indeed consolidate both men's voters. (Z)

As the Senate races head to the finish line, the news is coming fast and furious. Here are this week's stories:

Good night, and have a pleasant tomorrow. (Z)

There is a saying in football that if "you have two quarterbacks, you have none." That seems a somewhat useful way to think about this year's Democratic field, which has six or seven people who could be described as a "frontrunner," including this week's candidate. But maybe when you have six or seven frontrunners, you really have none. 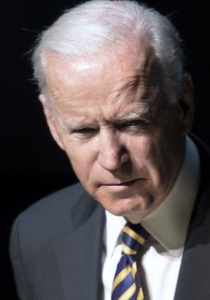 That's the best poll Kyrsten Sinema has gotten in a while. Given her performance in this week's debate, as well as the fact that Martha McSally has been holding Donald Trump very close (in a state where he's not so popular), it could be legit. (Z)