Note: For the next 3 weeks, posting times may be a bit erratic due to travel.

Although we are not likely to witness any lawsuits over dimpled, hanging, or pregnant chads this year (as in Florida in 2000), there will be lawsuits a-plenty. In addition to the one in Pennsylvania challenging the voter ID law there, a new one in Ohio over whether provisional ballots filed in the wrong precinct are valid is underway. As in all these cases, the Democrats want the law to include the largest number of people and the Republicans are trying to narrow the electorate as much as possible.

Three Republicans are going head to head today for the Missouri Republican nomination to face off against Sen. Claire McCaskill (D-MO) in November. They are former state Treasurer Sarah Steelman (who has the backing of Sarah Palin), Rep. Todd Akin (who McCaskill clearly prefers because he is the most conservative of the trio) and wealthy businessman John Brunner. A new PPP poll puts Brunner first at 35%, Akin second at 30% and Steelman last at 25%. But with 10% of the voters undecided, an upset is certainly possible.

Could the Electoral Vote Be a Tie?

In a close election, it is possible that the electoral college could be tied 269 to 269. Then we move to Plan B. (Actually, if it is 270 to 268 and there is a faithless or extremely stupid elector among the 270, we also move to Plan B because the Constitution says you need an absolute majority, not just more than the other guy.) So how might we get a tie? As we discussed on June 4, there are 18 states plus D.C. that have gone Democratic five times in a row in presidential elections. It is very unlikely that any of them will be in play except possibly Pennsylvania and Wisconsin (due to photo ID laws that will suppress Democratic turnout). With Pennsylvania and Wisconsin, Obama is fairly sure of 242 electoral votes. Without them he is pretty sure of 212 EVs. Let us use that scenario. So Obama has a base of 17 "states" (including D.C.) and 212 EVs.

Romney's base is all the states that the Republicans have won five times in a row plus the Southern states that Bill Clinton picked off because he is from the South. Obama has no chance of winning any of these. This gives Romney a base of 20 states and 165 EVs. In contrast to the map of June 4th, we no longer believe Arizona and West Virginia are swing states, so color them red. Now Romney has 22 states and 181 EVs.

That leaves 12 swing states worth 145 EVs. These are Colorado, Florida, Iowa, Missouri, Nevada, New Hampshire, New Mexico, North Carolina, Ohio, Pennsylvania, Virginia, and Wisconsin. Here is the map we will work from. Note that it is more Romney-friendly than the June 4th map because we have changed Wisconsin and Pennsylvania from sure Obama to tossups and Arizona and West Virginia from tossups to sure Romney. The purple states are where all the action will be. 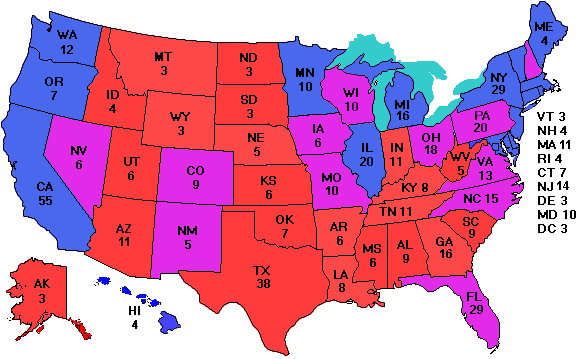 For the purpose of seeing how many ties there are, each of the 12 swing states could go either way, for a total of 2^12 or 4096 combinations. People aren't so good at enumerating all of them, but a garden-variety PC can do this in 10 milliseconds. Here are all the combinations of the swing states that add up to exactly 57 EVs (in alphabetical order), which when added to Obama's base of 212, gives him precisely 269 EVs, and thus a tie.


However, there is another way to get a tie. Obama won the Omaha congressional district, NE-02, in 2008. He could win it again, in which case if he wins 268 EVs elsewhere plus that one, he again gets to 269. There are 42 ways to pull this off, as follows.


Can we estimate how likely this is? In a crude way, yes. If we assume that each state has a 50% chance of going for Obama (which is certainly not true--New Mexico is far more likely to do so than Missouri), then all 4096 combinations are equally likely. Of these, 97 lead to a tie, so the probability of a tie is 97/4096 = 2.4%. It is not that likely, but it could happen.

Suppose it does. Then what happens? Turns out the founding fathers thought of this possibility. In fact, it has happened twice (1800 and 1824) that nobody got a majority. In the event nobody has an absolute majority of the EVs, the newly elected House of Representatives chooses the President, with each state getting one vote. If the state delegation split evenly, the state probably won't be able to vote. If either candidate gets 26 votes, he becomes President. However, if no one receives 26 votes, possibly due to some states being unable to vote due to evenly split delegations, then we go to Plan C. The new Senate chooses the Vice President, with each senator getting one vote. If the Senate is divided 50-50, then the President of the Senate--and on Jan. 6, 2013 when this would play out, that would be Joe Biden--gets to cast the deciding vote, presumably for himself. If on Jan. 20, the House still hasn't chosen a President, the new Vice President would serve as acting President until the House got its act together. The deadlock could be broken by a House member switching parties (and you can imagine the wheeling and dealing that might occur to encourage that), a member dying, or if it got that far, the 2014 elections.

The algorithm is not quite watertight though. Suppose the electoral votes are tied, nobody gets 26 votes in the House, the Senate is tied 50-50 and Joe Biden has died after the old Senate has permanently adjourned. President Obama would instantly nominate a new Vice President, but the hamstrung Senate would never confirm him. At that point there would neither be a President elect nor a Vice President elect, so the new Speaker of the House would become President and in his or her absence the President pro tem of the Senate (Daniel Inouye at present). After that it gets hairy. Normally the Secretary of State comes next, but her term would normally end on Jan. 20, 2013 so it is unclear what would happen after that. Probably if all this happens, the Supreme Court would get into the act. Hopefully the electoral college won't be a tie.