Last December, Obama strategist David Axelrod outlined five possible paths to President Obama's reelection. Let's take a look at them 6 months later to see if any of them still make sense. The basic idea is that some states are safe for one party or the other and others are in play. The question is where to put your resources. 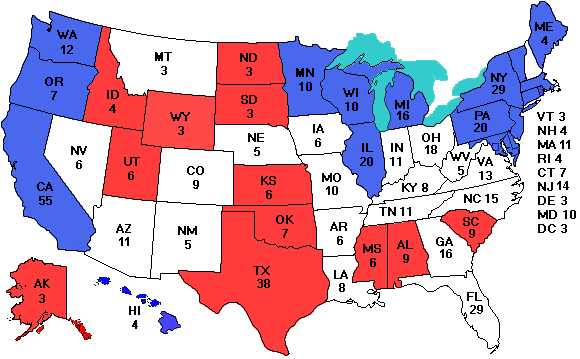 With this map, Obama has 242 electoral votes locked down and Romney has 97. However, there are a few anomalies here. Bill Clinton won some very Republican states in the South because he is a Southerner. Obama won't win these. Also, the Democrats won Indiana and Montana once and a single electoral vote in Nebraska, which splits them by congressional district. These are very likely to go for Romney. This brings us to map #2, where Obama has 242 electoral votes and Romney has 165. 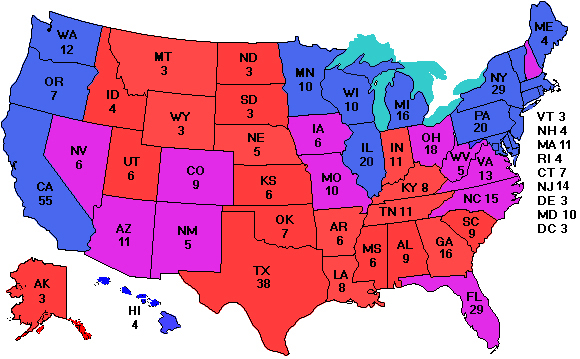 If this model is correct, all the action will be in the 12 purple states above. Below are the five paths to victory that Axelrod sketched. Remember, Obama is starting from a base of 242 electoral votes, so he needs to get 28 more EVs. Romney, of course, is going to try like hell to prevent this from happening. Here are the five paths that Axelrod talked about.

The fifth path is to win a random collection of other states, but that seems unlikely except for New Hampshire. So let's concentrate on the four paths above.

Currently Obama is +4% in Virginia but -4% in North Carolina. North Carolina just voted for a ban on same-sex marriage and shortly thereafter Obama came out in favor of it, so at least on this one issue, he is out of step with the state. On the other hand, the Republicans had an interesting primary to vote in and the Democrats didn't, to the composition of the general-election electorate may be quite different than that of the primary. Also, the Democrats are holding their convention in Charlotte, NC, which will allow them to showcase their stuff there. While North Carolina is not yet Virginia, it is becoming more purple generally due to the influx of highly educated people from out of state into the Research Triangle Park area near Durham, Raleigh, and Chapel Hill. Four major universities are located there and they have drawn over 150 tech and financial companies to the area, making it more like Maryland than like South Carolina. The big question is the relative turnout in Wake and Durham counties vs. the rural western part of the state.

At the moment, Florida, a perennial swing state, has Romney up by +1%, but that changes constantly. It is also an extremely expensive state to advertise in. But from Romney's point of view, it is an absolutely must-win state. If he loses Florida, the show's over for him. He has to win it, which means he will be putting a lot of resources into TV advertising there. Obama will no doubt also contest it heavily, if for no other reason than to force Romney to drop tens of millions of dollars there. Obama will no doubt harp on the GOP House budget, which abolishes Medicare as it has been for the past 45 years and turns it into Vouchercare, in which seniors are given a voucher and told to go buy insurance on the private market. Since Florida has a lot of seniors, Medicare is a very big issue there and could be Romney's Achilles heel if Obama chooses to dump $50 million in the state.

The Midwest doesn't look so promising for Obama at the moment. He is -2% in Ohio, tied in Iowa, and +1% in Missouri. While Obama is currently a fraction ahead in Missouri, the state is slowing trending Republican. On the other hand, a full-bore attack on Romney's Let Detroit go bankrupt op-ed could work in Ohio since the state is full of suppliers to the auto industry. More than in most states, the economy is crucial in Ohio, so Romney is going to make a huge effort to convince people that he can run it better than Obama. If the unemployment numbers for the next 5 months are as feeble as they were in May, it just might work.

West Virginia is probably a lost cause for Obama, even though the governor and both senators are Democrats. It's as much cultural as anything else. People there can't imagine sharing a jug of moonshine with a guy from Harvard Law.

Here Obama is looking better, In New Mexico he is +14%, the same as Minnesota and Washington state, neither of which are conceivably within Romney's grasp under any circumstances. In Colorado Obama is +1% and in Nevada he is +2%, but Obama won both states by 9% and 12%, respectively in 2008. They could easily revert to this. One unknown is the large Mormon vote in Nevada, which Romney will get all of. On the other hand, Nevada also has a very large Latino population and Latinos vote heavily Democratic. All in all, Obama's has a solid shot at these 20 electoral votes.

Arizona is a different story, It generally votes Republican, although Bill Clinton carried it in 1996. A wild card here, as in Nevada, is the balance between the Mormons in the north and the Latinos in the south. Another factor is that the Democratic candidate for the seat of retiring senator Jon Kyl is George W. Bush's Surgeon General, Richard Carmona, a Latino Vietnam veteran. He could pull a lot of Latinos to the polls. Without Arizona, Obama needs abother 8 EVs somewhere. New Hampshire plus Iowa would give him 10 EVs, for example. While Romney has a home in New Hampshire, he is not especially popular in the state and is currently -12% there. Iowa is currently tied, but has gone to the Democrats in four of the past five elections. Only in 2004 did Bush carry it, and then by 1%.

So based on current polling data, the best strategy for Obama is to focus on the West (Nevada, Colorado, and New Mexico), plus Iowa and New Hampshire. Together they have 30 EVs, which added to the sure states gives him 272 and a second term. And of course, he is not going to abandon any of the other swing states. It is just a question of priorities.

None of this is a secret to Romney (certainly not if he reads this blog), but even he and his superPAC friends have only so much money and winning Florida, North Carolina, Virginia, and Ohio have top priority, possibly leaving insufficient funds over to fight in the smaller states where Obama could make his stand.

The state of Florida is currently engaged in a massive effort to purge as many as 200,000 voters from the voting rolls. Probably not coincidentally, a large number of them are blacks and Latinos, who vote Democratic in large numbers. The state is doing this by comparing voter registration lists to citizenship information available in the drivers' license database. In practice, this means that people who were not citizens when they applied for a driver's license but who later became citizens are not going to be allowed to vote.

Since Florida is one of the states covered by the 1964 Voting Rights Act, it is required to get permission from the Dept. of Justice before carrying out this kind of operation. It didn't ask and when the Dept. of Justice found out about it, it ordered Florida to stop. However, a defiant Gov. Rick Scott (R-FL) has made it clear that he has no intention of stopping. He says it is necessary to prevent noncitizens from voting. Democrats say that there are almost no proven cases of noncitizens voting and that the move by Florida and other states with Republican Secretaries of State is a thinly veiled attempt to remove as many Democrats as possible from the voting lists. The state's premier newspaper, the Miami Herald, has taken a stand with the Dept. of Justice and called for the purge to stop.

Another complication here is the timing. Federal law prohibits purging people from the voting rolls within 90 days of a federal election, in order to give people time to challenge their removal. Florida's August 14 primary counts as a federal election and is only 71 days away, so even if the purge were not discriminatory, the timing violates federal law. It is not clear what happens next.