Senate Republicans met yesterday to lick their wounds. At the start of the year, they (and most pundits) thought they would take control of the Senate. Instead they lost three of their own seats and picked up only one Democratic seat. The Democrats won every close race except Nevada, and they might have won that one as well had their candidate not been embroiled in a conflict-of-interest issue.

Improving matters may not be so easy, as evidenced by the fact that yesterday the Republican Senate caucus elected Sen. Jerry Moran (R-KS) as chairman of the National Republican Senatorial Committee. They had to elect Moran, despite the fact that he is freshman and hails from a state with few big donors, because nobody else wanted the job. In 2012, the NRSC chairman, Sen. John Cornyn (R-TX), could use Texas as a big ATM and DSCC chairwoman, Sen. Patty Murray (D-WA), could raise funds from all the high tech companies around Seattle.

Moran's first comment was that the Republicans needed better Senate candidates. But how is he going to achieve that? If he backs moderates in the primaries, the tea party is going to be absolutely furious. Furthermore, Cornyn tried that to some extent in Missouri and Texas and his guy lost. Moran doesn't have the experience, money, or clout to silence the tea party, and if he tries to back establishment candidates in Senate primaries, he may find himself up against Sen. Jim DeMint (R-SC), the informal leader of the tea party caucus in the Senate. DeMint has a powerful fund-raising machine and in key races, could possibly outspend Moran.

On paper, the Republicans should do well in 2014 since only one of their incumbents (Susan Collins) is at all vulnerable and half a dozen Democrats are, but the fact that no Republican senator of any stature wanted to chair the NRSC, speaks volumes about what the Republicans really think about 2014. After all, any Republican senator who ran the NRSC and brought in half a dozen Senate seats would zoom up in the leadership, but one who lost what should have been any easy year full of pickups would become a pariah. Moran has nothing to lose, so for him it is worthwhile gamble, but why wasn't anyone else interested? Probably because they didn't want to have to fight the tea party in primaries.

Aware of the drubbing they took among women in the election, House Republicans decided to elect a woman, Rep. Cathy McMorris Rodgers (R-WA), as chairwoman of the House GOP conference, the #4 position. She defeated Rep. Tom Price (R-GA) for the job. McMorris Rodgers will no doubt now become a familiar figure on television explaining Republican positions on the issues. She rarely talks about abortion and contraception, though, preferring to say that what women care about is the economy. It is likely to be the standard message, just with a female messenger.

Most polls are made by calling people on the phone but only about 9% of the people called are willing to respond and the number is dropping. One study of polling, done by the Dept. of Housing and Urban Development, showed that it cost $77 per completed questionnaire when calling landlines and $277 when calling cellphones. With a 50-50 mix and 600 respondents, a survey costs $106,000. Robopolling is cheaper, but it is against the law for a computer to call a cell phone. For this reason, pollsters are starting to explore using the Internet as a means of polling, but there are problems, such as how to you get a random sample, how do you know where people live, and more. But things are moving in that direction. When telephone polling began to replace door-to-door polling, similar questions were asked and eventually answered.

Results of the Poll Taken Here on Nov. 5

On Nov. 5, we posted a poll and asked readers to take it. Almost 60,000 people did. If you were one of them, thank you. Below are the results. For a larger version of the graphic, please click here. 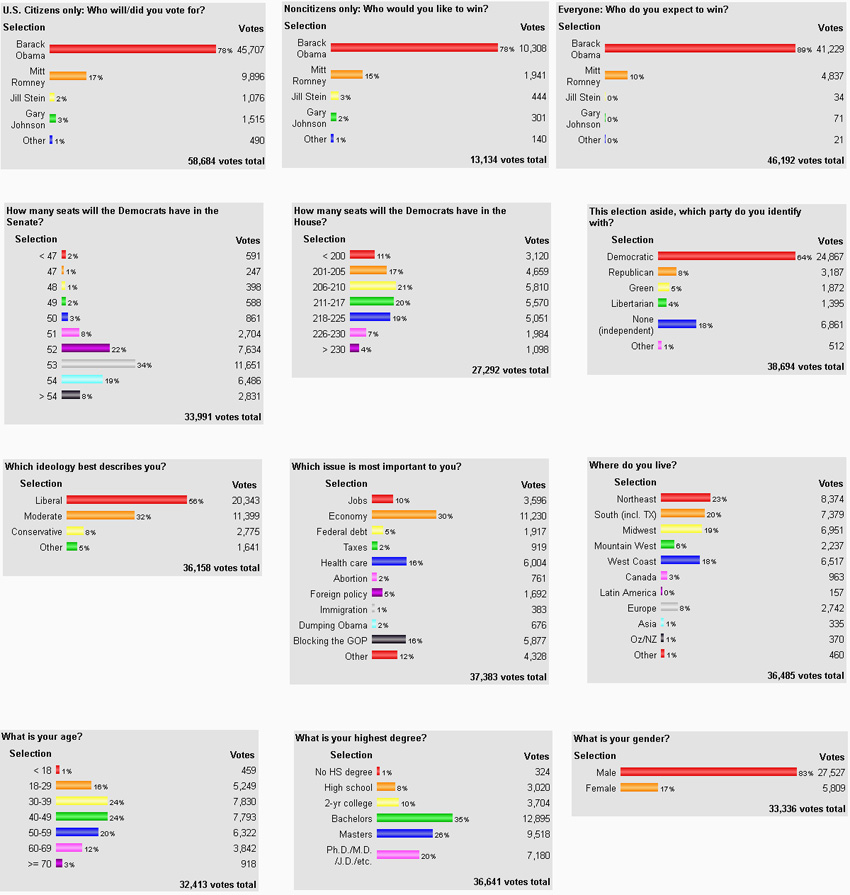 The modal visitor is a liberal Democrat who voted for Barack Obama. He is between 30 and 50, has a college or graduate degree, and is concerned about the economy and jobs, although health care is also important. He could live in the Northeast, South, Midwest or West. He is definitely a "he" as only 17% of the readers are women, which seems a bit surprising, since there has been endless talk of the women's vote all year. One other surprising item is that only 8% of the respondents thought the Democrats would end up with 55 or more seats, which is what happened when Angus King officially said yesterday that he would caucus with the Democrats, like fellow New England independent, Sen. Bernie Sanders (I-VT).

Several readers asked how the Republicans could get more seats in the House when Democratic House candidates got more votes nationwide than Republican House candidates. The answer is that in 2010 Republican state legislatures gerrymandered the districts in many states they controlled. Here is a brief primer on how the process works. 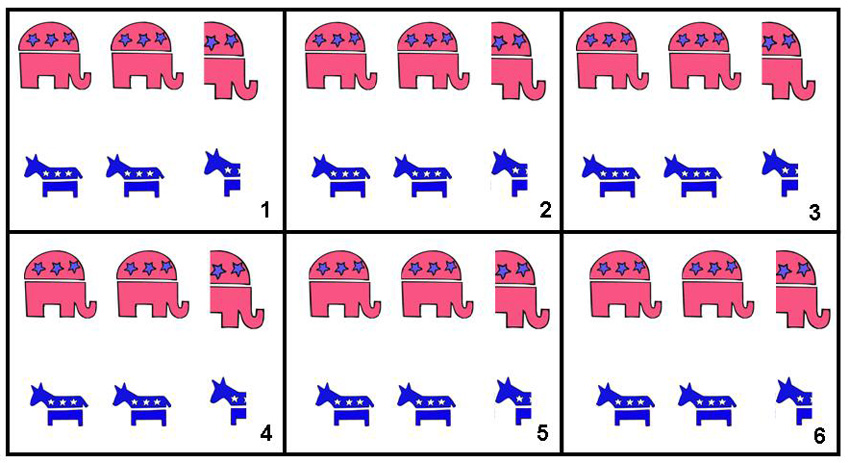 But a Republican legislature that wanted to maximize its representation in the House might draw the boundaries differently, for example like this. 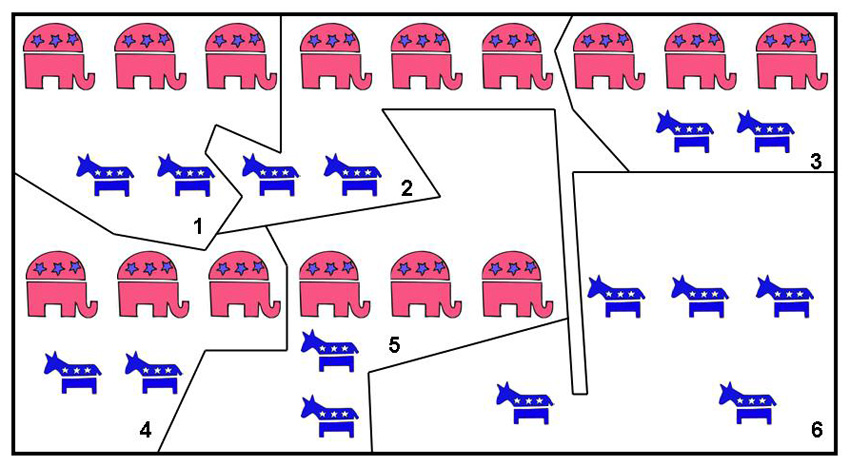 In this map, districts 1-5 have 300,000 Republicans and 200,000 Democrats, so the Republican candidate can probably win, assuming he doesn't spend the whole campaign talking about rape. But we have 500,000 Democrats left over, so they get stuffed into district 6, which probably needs a strange shape to include them all. If the map looks like this, the Republicans can easily win five of the districts and won't bother to even field a candidate in district 6. With voting totals available on a precinct level, computer software can produce statewide maps that maximize the partisan advantage for one side. Here are some actual district maps drawn in 2000.

Immigration Reform Could Help the Democrats in 2014 and 2016

In his post-election press conference, President Obama made it clear that immigration reform is a top issue for him. And well it should be on two fronts. First, if it gets it through, his legacy will read: first term he passed Obamacare, second term he legalized the status of 12 million illegal aliens. But politically, it is even more important as immigration is a real wedge issue. If the immigration bill written by senators John McCain and Teddy Kennedy is reintroduced, Obama could get back into campaign mode and fly all over the country encouraging people to email their senators and representatives to support it. After a few weeks of that, he would own the issue. If enough Republicans supported the bill for it to pass, Obama would get most of the credit and Latinos would surely remember that in 2014 and 2016. If the Republicans killed the bill either by filibustering it in the Senate and voting it down in the House, Latino voters would remember that for a long time. Actually, for Obama the second route (losing) is probably better because it allows the Democrats to support immigration reform in 2014 and 2016, keeping it a potent issue among Latinos. If the bill passes, after a while it will cease to be an issue. After all, how many blacks now vote for the Republicans because they freed the slaves? (Actually, the Emancipation Proclamation didn't free any slaves because there weren't any slaves in the North and the South just ignored it, but it is a nice myth.)

Even better for Obama, is that a drive on immigration will split the Republican Party wide open. The nativist base will call it "amnesty" and be violently against it. The pros, like Mitch McConnell, John Boehner, and Karl Rove, will understand clearly the dire electoral consequences of opposing it and try to get something passed. It won't be pretty.