With half a dozen close Senate races going down to the wire and the control of the Senate at stake, the DSCC (Democratic Senatorial Campaign Committe) outraised the NRSC (National Republican Senatorial Committee) in September by a margin of $16 million to $13 million. For the third quarter of the year overall, the DSCC's haul was $29 million to the NRSC's $25 million. As of Sept. 30, the DSCC had $27 million in the bank to the NRSC's $23 million.

Once upon a time, newspaper endorsements actually swayed voters. Most people read only one and it had an air of authority. With the vast number of news sources available online nowadays, it is doubtful many people who read newspapers--and their numbers are dwindling rapidly--do what their newspaper tells them to do. Nevertheless, newspapers still endorse candidates. So far, Obama has collected seven endorsements to Romney's five. Here they are.

To the extent these matter at all, the endorsement of Obama by the Salt Lake Tribune is surprising, but unlikely to deliver Utah to Obama. The Denver Post's endorsement of Obama might help a bit in Colorado, however. Also, the Cleveland Plain Dealer's endorsement in ultracrucial Ohio, might be worth a few votes. Romney got endorsements in two swing states: Nevada and Florida. The total circulation of the papers endorsing Obama is 1.5 million whereas Romney's have a circulation of 1.1 million. However, these figures don't mean so much any more because many people read newspapers online and those readers don't count in the circulation figures. Many more newspapers are expected to endorse a candidate in the next 2 weeks.

Americans are used to hearing about the presence of international monitors at elections in newly democratic countries where election shenanigans are expected. Now the tables are being turned and the Organization for Security and Cooperation in Europe is sending 44 observers to watch and report on the honesty of the U.S. elections.

A few decades ago, such an action would have been unthinkable, but with all the attempts at voter suppression and intimidation floating around, the fundamental integrity of the U.S. elections process is being called into question, both domestically and abroad. An example of the kind of activity that raises suspicions is this billboard, which has appeared in large numbers in black, Latino, and student areas in Wisconsin and Ohio. 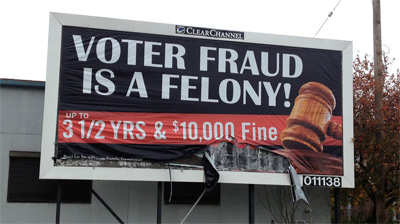 Civil rights groups say it is an attempt to scare minority groups and students into not voting. Many Republicans say in-person voting fraud is epidemic. The facts, however, show that actual in-person voting fraud is virtually nonexistent. In one study of 197 million votes cast in federal elections, only 26 cases of in-person voting fraud were confirmed, or about 0.0000001% of the vote. The "noise" in the system--the error rate of the optical scanners used to count ballots in many states--is about 0.1%, so the infinitesimal amount of fraud is drowned out by simple counting errors.

Many people have wondered who is paying for the billboards, but Clear Channel, which owns them, won't say, even though its own policy prohibits anonymous billboards.

McCain-to-Obama Defectors Are Older White Men from the East

While it may be hard to believe, an Ipsos poll shows that 5% of the people who voted for John McCain in 2008 switching to Obama this time. The switchers are predominantly white men, skewed older than the general population, and largely without college degrees. About 40% live in the mid- or South-Atlantic states. In interviews, some said that they supported McCain due to his military background, something Romney lacks. Others felt that Romney is out of touch with ordinary Americans.

The New York Times has reported that the Iranian government has agreed to talks about nuclear weapons after years of secret negotiations. Maybe it is a coincidence that tomorrow President Obama and Mitt Romney will have their final presidential debate--on the subject of foreign policy. If this report is true, no doubt Obama will point out that diplomacy requires patience and Romney's stumbles on his foreign trip in July show his bull-in-the-china-shop approach is completely inappropriate. It is possible that Romney will retort that the Iranians have agreed to talks at this moment because they are scared that he would either attack Iran or give Israel permission to do so. Normally, foreign governments don't inject themselves into U.S. elections simply because picking the wrong horse could have dire consequences for them. In this light, the tacit support Israeli Prime Minister Benjamin Netanyahu has given Mitt Romney is surprising. Netanyahu grew up in a Phildelphia suburb, graduated from M.I.T., and served as Israeli ambassador to the U.N. He understands U.S. politics very well and should know better.

Another report claims that Iran is holding off until after the election to see who its negotiating partner will be. Obviously, Iran does not want other countries to interfere with its internal affairs, but if it is convinced that either the U.S. or Israel would bomb its nuclear facilities, it might be forced to talk. Note that although the White House has denied that the talks have been agreed to, it did not deny the accuracy of the New York Times report linked to above. Such is the nature of diplomacy. Countries are like 8-year-old boys: not losing face is the most important thing in the known universe. You have to be careful not to insult them.

Another country that is sure to get lots of air time in tomorrow's debate is China. In particular, Romney's statement that China is a currency manipulator is sure to worry Chinese leaders. However, China is in the final stages of a transition between President Hu Jintao and Vice President Xi Jinping to be completed two days after the U.S. elections, so China is keeping out of the election because nobody is really in charge there at the moment.