Romney Gets Three Pinocchios for 47% Remark

The Fact Checker has carefully examined Mitt Romney's statement that 47% of the population is "dependent on government" and awarded it three Pinocchios, meaning it is a "Significant factual error and/or obvious contradictions." The worst possible rating is four Pinocchios. In a very literal sense, everyone is dependent on government. Without the police--a government function--America would be Sudan, with roving bands of criminals stealing and marauding in broad daylight.

But Romney was not talking about police protection or roads built by the government. He has often said there are two kinds of people: makers and takers and he was implying that 47% of the population are takers, essentially mooching on the other 53%. The number, 47%, is the number of people who pay no federal income tax for various reasons. It includes elderly people who live entirely on social security, students who earn too little to pay, and multimillionaires whose income comes entirely from tax-free municipal bonds, just to name a few categories. It also includes families with low incomes who take advantage of the Earned Income Credit (EIC), which was signed into law in 1975 by President Gerald Ford. Here is a detailed breakdown of the 47%. To categorize a millionaire who is invested entirely in tax-free bonds as "dependent on government" or as a "taker" is patently false. There are an estimated 4000 millionaires who pay zero federal tax.

Also missing from this equation are other taxes, including Social Security tax, state income tax, sales tax, and property tax. When these are included, almost no one except propertyless people living in states with no income or sales tax escape taxation entirely. Romney focused exclusively on the federal income tax because that is the tax the wealthy hate second most, after the estate tax. Republicans have nothing against the sales (and value-added) taxes. Various Republican candidates over the years have proposed abolishing the federal income tax and replacing it with a national sales or value-added tax of circa 20%, knowing full well that it is regressive because lower- and middle-income people spend most of their income but upper-income people save most of theirs.

Although he didn't say it literally, Romney's audience of wealthy donors surely understood that "takers" were typically ethnic minorities on welfare and food stamps living in large cities in blue states in the North. It turns out that is not true, either. The nonpartisan Tax Foundation, which Romney has cited in the past as an objective source of information, wrote an article listing the percentage of people who paid federal income tax (the "makers") and who paid no federal income tax ("the takers"). It also produced a map (below) showing the top 10 "maker" states in blue and the top 10 "taker" states in red. Here is the map. 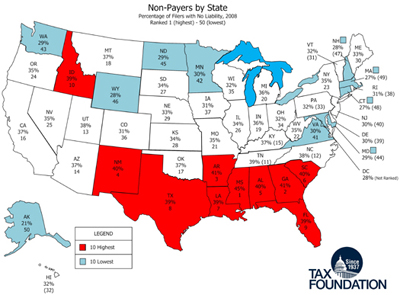 As can be easily seen, with a few exceptions, the "takers" form the base of the Republican Party and the "makers" are Democratic states. The reason is straightforward: the (Republican) South is poorer than the (Democratic) North and has many more people whose income is so low that they owe no federal income tax on it.

This entire flap is causing Romney a fair amount of grief. Romney has been openly attacked on his remarks by Republicans from Bill Kristol to Senate candidate Linda McMahon. Yet even with all the publicity the story has gotten, not everyone understands it. Sen. Scott Brown (R-MA) repudiated Romney and said: "As someone who grew up in tough circumstances, I know that being on public assistance is not a spot that anyone wants to be in." Brown seems to think the 47% are on welfare, which is completely untrue (see story below). Karl Rove, who understands electoral demographics better than any other Republican, correctly noted that many of the people who pay no federal income tax are Republicans.

While polls taken this week won't be out for a few more days, there is one real-time indicator of how well Romney is doing: intrade.com. There Romney's chances are currently 31%, down from 42% just two weeks ago.

Are the 47% Diehard Obama Supporters?

Another point Romney made in the video was that the 47% who pay no federal income tax are wedded to Obama and nothing he (Romney) can do can change that. But is that true? There are no exact statistics on the voting preferences of people who don't pay any federal income tax, but there is some statistical evidence. About half the people who owe no federal income tax earn less than $30,000 a year. In 2008, a year of record turnout, 55% of them didn't vote at all. Of those who did vote, something like 30% voted for John McCain.

What about the 50% who earned above $30,000? About 44% benefit from deductions and credits for the elderly that reduce their tax to zero. The breakdown of the senior vote was 37% for McCain, 33% for Obama, and 30% who didn't vote. Next comes the 34% of the 50% who reduced their taxes through the EIC. These are the working poor. The best guess here is that half didn't vote and the rest voted for Obama.

Finally we have the other 26% of the half making over $30,000. It is hard to say what they did since it is such a mixed bag. A plausible guess is that 40% didn't vote and the other 60% split evenly over Obama and McCain, more or less like the population in general. Here is a table summarizing these results.


Adding up all the numbers, we find 19% probably voted for McCain and will probably vote for Romney, 34% voted for Obama, and 47% didn't vote at all. So rather than 100% voting for Obama, it was probably closer to a third. Clearly Romney could put some effort into wooing the nonpayers who didn't vote at all, especially since he is on record as applauding people who pay as little tax as they legally can and these people achieved the holy grail: zero tax. They are his kind of people.

Romney Campaign Borrowed $20 Million from a Bank During the Summer

Despite prodigious fund raising all year, the Romney campaign ran out of cash this summer and had to borrow $20 million from a bank to keep going. Part of the problem is that by law campaigns must separate money donated for the primaries from money donated for the general election. During the summer, the fund for the primaries was nearly empty but Romney was not allowed to use the general-election money until he was officially the Republican nominee, that is, after the convention. Getting the bank loan wasn't a problem since general-election money could be used as collateral.

The interesting thing about this story is the fact that despite the fact that Romney is personally worth about $250 million, he was unwilling to donate (or even loan) his campaign the needed $20 million. If you have just spent the last 5 years of your life campaigning for President and the race has 5 months to go, surely loaning your campaign a small fraction of your net worth seems like an obvious thing to do, but for whatever reason, Romney didn't do it. In 2008, he donated $40 million to his campaign.

Will There Be Enough Television Time for all the Ads?

With politics so awash with superPAC and candidates' money, there is a danger of there simply not being enough television time available to spend it all. It is estimated that 43,000 political ads will air every day through Nov. 6. At some point, however, viewers will just tune out. If someone sees an ad 15 times in an evening are they more likely to vote for the candidate than if they see the ad only 10 times? Probably not, but the campaigns and superPACs have so much money they don't know what to do with it, so they just run more spots.

With all that political advertising, it is easy for a candidate's message to get lost, so some candidates are becoming creative to get viewers to remember them. For example, Shelley Adler (D), who is challenging Rep. Jon Runyan (R-NJ), is running an ad showing an actor who looks like Runyan wearing a suit and football helmet tackling elderly people as a way to remind people of Runyan's past as an NFL player and his desire to turn Medicare into a voucher program.

In a surprising decision, the Pennsylvania Supreme Court, which has three Democratic Appointees and three Republican Appointees on it, voted 4 to 2 yesterday to send the voter ID case back to the lower court. The three Republicans and one Democrat formed the majority. In effect, the Supreme Court, ordered the lower-court judge, Robert Simpson to redo his homework. If Simpson finds that no voters will be disenfranchised in practice, as well as in theory, the law can be upheld. In theory, making voters prove who they are before they can vote sounds fine. In practice about 10% of the voters don't have official ID and can't get it easily. Some lack a birth certificate and can't get one because they can't prove who they are, were born far from Pennsylvania, or can't afford the birth certificate fee. Others meet all the requirements but are too old or infirm to travel to a state office that issues IDs. The Supreme Court could have accepted the lower court's ruling and ended the case, but chose not to. Democrats, who oppose the law, see this as an opening, but the ball is now in the judge's court.

House Democrats introduced a bill yesterday that would allow a voter lacking state-mandated voter ID in any federal election to sign an affidavit under penalty of perjury that he or she was a legal voter. The bill has zero chance of passing the Republican-controlled House. All it does is bring some attention to the issue.

Yesterday the Court of Appeals for D.C. reversed a lower court ruling that said political groups must disclose their donors. Unlike the lower court, the Court of Appeals held that the 2002 Bipartisan Campaign reform Act only applies to donors who earmark their contributions for specific kinds of ads. The legal fight is not over, but for practical purposes, donors in this election cycle are likely to remain secret if they so wish.

Under Missouri law, Republican Senate candidate Todd Akin can petition a court to have his name removed from the ballot up to Sept. 25. Republican leaders in Congress are treating him as a pariah for the moment and want him out of the race. However, Missouri law says that if a judge were to grant his petition to withdraw, he would have to pay to replace ballots that have already been printed. Overseas ballots must be sent out before Saturday, so they have already been printed along with many others. The cost to reprint the ballots could be hundreds of thousands of dollars.

Akin reported $525,000 cash on hand at the last filing deadline, compared to $3.5 million for his opponent, Sen. Claire McCaskill (D-MO). Akin is known to be averse to taking on debt but dropping out would leave him with a large debt, so that alone may make it unlikely for him to do so. If he remains in the race, McCaskill is likely to hold her seat.