The junior senator from Texas, Ted Cruz (R), has released his Canadian birth certificate, issued by the city of Edmonton, Alberta. Here it is: 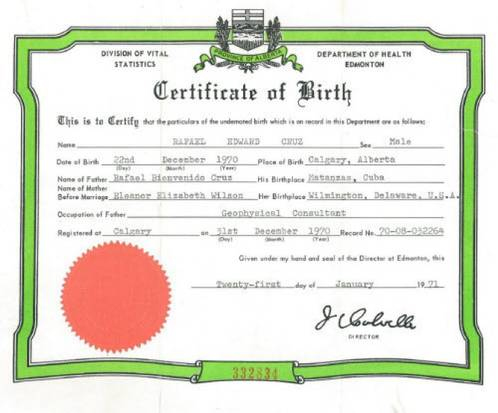 Why might he do such a thing, as he is a senator and it doesn't matter where a senator was born as long as he or she is 30, has been a citizen for 9 years, and lives in the state he or she is representing? The exact text of Art. I, Sec. 3, Clause 3 of the Constitution reads:


No Person shall be a Senator who shall not have attained to the Age of thirty Years, and been nine Years a Citizen of the United States, and who shall not, when elected, be an Inhabitant of that State for which he shall be chosen.

Since no one is suggesting Cruz is ineligible to serve in the Senate, he is clearly thinking about running for President in 2016 and wants to get that pesky "natural born citizen" thing out of the way now. It seems to come up with some regularity. John McCain was not born in the United States. He is a Zonian, but both of his parents were American citizens at the time of his birth, which automatically made him a citizen at birth. Mitt Romney was born in Michigan, but his father, George Romney, ran for President in 1968, even though he was born in Mexico to American Mormon missionaries. Barack Obama was born in Hawaii after it became a state, but some people refuse to believe it.

Cruz is a more interesting and complicated case. Most media reports about him have it wrong, so pay attention. Cruz was born on Dec. 22, 1970 in Edmonton, Alberta, Canada. His father, Rafael Cruz, was born in Cuba and fought with Fidel Castro against Fulgencio Batista. The senior Cruz later moved to Canada with his wife (Ted Cruz' mother, Eleanor Darragh), who was born in Wilmington, DL.

Thus the fact that Cruz' mother was born in Delaware is not sufficient to transmit her U.S. citizenship to her son. She would have to have met the above tests as well. If Cruz is serious about proving his status as a natural born citizen, he needs to document her whereabouts for 10 years in the U.S. from before 1970. It is far from clear what might constitute proof. She graduated from Rice University in 1956, but that diploma probably doesn't state how long she attended Rice. She might have transferred in from the University of Alberta in her senior year.

It is fairly likely that Darragh met the requirements, but Democrats who are tired of Republicans bringing up Obama's birthplace long after he released his long-form birth certificate, could continue to hound Cruz for proof about where his mother lived. That may not be so easy to obtain any more. His mother is still alive, but she may not have saved her utility bills from before 1970.

Cruz has another problem besides finding his mother's phone bills. Since he was born in Canada, he is a natural born Canadian citizen. Some people might even call him an "anchor baby." He can vote in Canada, request a Canadian passport, or run for Parliament. Legally, he could even be President of the United States and Prime Minister of Canada at the same time. Assuming that his mother meets the above physical presence tests, Cruz is a dual national. Now there is nothing in the Constitution or U.S. law that prohibits a dual national from being President, but the "America first" crowd may not be happy with "America tied for first." Cruz can easily renounce his Canadian citizenship and reports say he will do that to get that out of the way so that in 2016 it will be old news.

This whole matter of "natural born citizen" has become absurd, but it is unlikely the Constitution is going to be amended any time soon to delete the words "natural born." Unfortunately for the Republicans, who dogged Obama for years about his birth, they are probably going to have to face years of "Let's see Mom's phone bills."

Lamar Alexander May Get Primary Challenger

Stories about a possible tea party challenger for Sen. Lamar Alexander (R-TN) have been floating around for weeks now. In a sense, Tennessee is fertile ground for a tea party challenge. Unlike states like Nevada, Colorado, and Delaware, where tea party candidates won Senate primaries only to be defeated by Democrats in the general election, Tennessee is a deep red state where any Republican is likely to win the general election absent a major gaffe. Alexander is moderately conservative, but that is not good enough for many in the tea party. They want a Ted Cruz clone.

Adding to the speculation is the announcement by popular Nashville talk radio host Ralph Bristol that a major announcment would be made on his show today. Coupled with a recent Triton poll showing Alexander trailing a "credible conservative candidate" by five points in a primary, it is likely that Alexander will draw one or more primary challengers. Even if a tea party candidate who is far out of the mainstream wins the GOP primary, the Democrats have little chance to pick up this seat as their bench in Tennessee is basically bare. Their only plausible candidate, former governor Phil Bredesen, has said he will not run.

Update: Tennessee state representative Joe Carr announced today that he will challenge Alexander in a primary. Lamar has about $3 million on hand but hasn't faced a serious challenge since his unsuccessful gubernatorial race in 1974. He defeated Democrat Bob Tuke in 2008 by a margin of 2 to 1. Of course, Tuke was running to Alexander's left while Carr will be running to his right, accusing him of the sins of compromise and bipartisanship. In Tennessee, these could be fatal. No matter what, it is going to be a bloody, ideological fight to the death because the winner is sure of a seat in the Senate. Email a link to a friend or share: