Even though their membership is shrinking, in part due to tactics employed by Republican-controlled states that want to weaken them, labor unions still wield a lot of clout within the Democratic Party. So President Obama addressed a major union meeting in Milwaukee yesterday. He pointed out that the economy has added 10 million jobs since he took office. But his visit to Wisconsin was not about abstract statistics. It was about getting union members and blue collar workers in the Midwest in general energized and ready to help the Democrats in key races, such as the hotly contested governorship of Wisconsin. Probably most union members are aware that Gov. Scott Walker (R-WI) signed a bill that crippled public employee unions in Wisconsin and then survived a recall election caused by the outrage the bill generated. Obama's point was that the union members still have a chance to get rid of Walker in November. Polls show him neck-and-neck with former bicycle company executive Mary Burke (D).

This is probably the most important gubernatorial contest in the country in November. Walker, a potential 2016 presidential candidate if he is reelected, hit the unions very hard. If he wins, other Republican governors will get the message that you can do that and survive. On the other hand, if he loses, it will be a warning signal to other governors and also to a potentially Republican-controlled Senate.

Embattled Sen. Kay Hagan (D-NC) has a surprising ally on her side: the financial sector. It has given her $363,000 since she was seated in the Senate in 2009. This is not entirely surprising since she was Vice President of a bank before entering politics and North Carolina has a large number of financial firms in the Research Triangle Park area. She also sits on the Senate banking committee, which has jurisdiction over banks. On the whole, they can live with her whereas her opponent, Thom Tillis, is an unknown quantity. In general, conservative industries like banking prefer incumbents whose track records are acceptable to newcomers whose behavior they can't predict.

Buying Access to Senators and Governors is Surprisingly Inexpensive

While the financial-political news has been dominated by the $300 million the Koch brothers plan to spend on elections this year, smaller amounts also get you some attention. According to a story in the Washington Post today, Andrew Sabin has given over $177,000 to campaigns this year and this has earned him personal visits from such Republican luminaries as Sen. Ted Cruz (R-TX) and Gov. Rick Scott (R-FL). In a world where big corporations buy and sell each other for tens of billions of dollars, it is perhaps surprising that something like a piddling $80,000 gets you real attention from some of the biggest names in the Republican firmament. The story also points out that 310 donors have taken advantage of the Supreme Court's ruling that unlimited campaign donations do not violate the Constitution but laws that limit donations do. These 310 donors have given a total of $11.6 million more than they would have been allowed to donate under the now-overturned law. That comes to about $37,000 per donor on average. Of course, it is only early September and there is still time for these donors to write some more checks. Nevertheless, the (temporary) conclusion is that the donor limit is small potatoes compared to the tens or hundreds of millions sloshing around in super PACs.

After so many years of bad economic news, the public doesn't believe that the economy really is improving. Half the people polled recently thought the economy was still in recession, even though the recession ended in June 2009. Unemployment is down to 6.2%, the same as it was in 2003, as shown below. 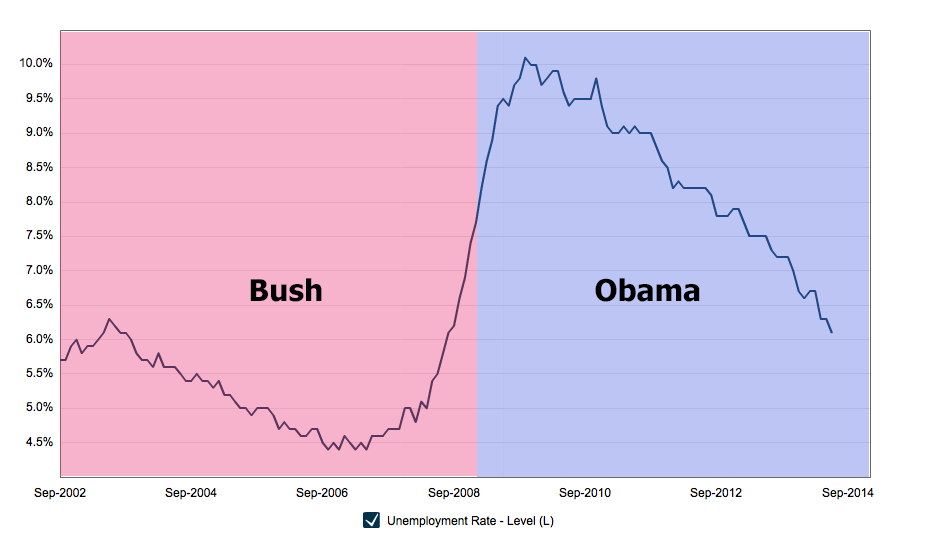 Basically, after the financial debacle of 2008, unemployment began to climb, reaching a height of 10% in Oct. 2009, at which time the stimlus bill Obama signed in February 2009 began to be felt and has been dropping ever since. The problem for the Democrats is that a lot of people don't realize that things have gotten a lot better and 10 million new jobs have been created during the Obama administration. But in politics, it is people's perceptions of reality that matter, not the reality itself.

Of course, eventually people will understand that the economy is getting better. From the above graph it should be clear that if the improvement currently in progress continues until 2016, unemployment will be near historic lows just in time for the 2016 election campaign.

Historically, the President's party loses big time in the House during the sixth year of his administration. Since WWII, half the time the loss has been more than 40 seats. This year Republican strategists expect the Democrats to lose no more than five or six seats. One key factor in their disappointing prognosis is that the DCCC has outraised the NRCC by $27 million. While a million dollars injected into a Senate race is down in the weeds, in a House race it is big money, so the Democrats can afford to outspend the Republicans in two dozen carefully chosen House races. Also, the number of true swing districts is very small, so major gains by either party are unlikely until the 2020 redistricting takes effect in 2022.

Another Take on Romney 2016

As talk about Romney in 2016 heats up, an opinion piece in the Washington Post written by a Republican explains why this would be a terrible idea. For starters, he lost against a weak President who was presiding over a slow economic recovery. In 2016 he won't be able to pin the economy on his opponent. But far worse, the problem is that Romney changed his positions on everything from health care to abortion multiple times during his career. Nobody knew what he really stood for and that would be equally true in 2016. Remember the Etch-A-Sketch debacle? People don't like voting for someone they can't trust. Finally, in 2016 Romney would be facing a far stronger primary field including well-known senators (e.g., Rand Paul, Ted Cruz, and Marco Rubio) and well-known governors (possibly Mike Pence, Chris Christie, Scott Walker, Rick Perry, and John Kasich). He couldn't survive the primaries by waiting for all the others to fail, one at a time, as happened in 2012.

Another widely discussed potential 2016 candidate is Gov. Chris Christie (R-NJ). To shore up his foreign-policy credentials, he is visiting Mexico this week. While there are many hot spots in the world today, Mexico is not one of them so it is not clear what this trip buys him. In a potential debate on foreign policy with former secretary of state Hillary Clinton is he going to say he visited Mexico in 2014? But in any case, his fate depends largely on whether U.S. attorney Paul Fishman indicts him and whether the report yet to be issued by the New Jersey legislature damns him. Until these issues clear up the rest is irrelevant.

If you don't believe that the 2016 presidential race is already underway, how would you explain the impending visits to Iowa by both Hillary Clinton and potential challenger Sen. Bernie Sanders (I-VT)? Sanders also spoke to a labor group in New Hampshire yesterday.

The map above doesn't include the special elections in Oklahoma and South Carolina because the software was never designed to handle two Senate elections in the same state in the same year. This year both Oklahoma and South Carolina have special elections in addition to their regular elections. We have dealt with this be simply assuming the Republicans will win both special elections and counting the seats as Republican holdovers, as they would have been had Sen. Tom Coburn (R-OK) and Sen. Jim DeMint (R-SC) filled out their terms. We now have a poll from Rasmussen showing James Lankford (R) leading Connie Johnson (D) in the Oklahoma special by a margin of 57% to 31%, thus confirming what we had assumed: at least in Oklahoma, a Republican victory is assured. The same is probably true in South Carolina. The election in Hawaii is technically a special election, but since there is no regular election there this year, we are tracking it normally. Other than the Oklahoma poll, there are no new polls today.