Hagan Pulling Ahead of Tillis in North Carolina

The biggest news today is out of North Carolina, where Sen. Kay Hagan (D-NC) is definitely pulling ahead of state house speaker Thom Tillis. Four polls in the past 5 days have given her leads of 6%, 4%, 3%, and 10%, for an average of 6%. This is beyond the margin of error. If she hangs on and the Democrats win the contested northern states of Colorado, Iowa, Michigan, and New Hampshire, where they are leading now, the Democrats will have at least 49 seats in the new Senate, as per today's map. This means the Republicans have to win all the contested southern seats in Arkansas, Louisiana, Kentucky, and Georgia, as well as Alaska. If the Democrats can win just one of them, they will retain control of the Senate. Also, this analysis depends on Sen. Pat Roberts (R-KS) hanging on by a thread in Kansas. If the Republicans win all the southern seats plus Alaska but independent Greg Orman wins in Kansas, then Orman decides who controls the Senate. This is the situation as of today, although Orman's lead over Roberts is only 1%, so it means the race is a tossup. A month ago the Republicans were buying the champagne, getting ready to uncork it on Nov. 4, but now Hagan's solid lead means that all the stars will have to align for them or they will have to sell the champagne on eBay.

In some states, such as North Carolina, absentee ballots have already been mailed out so some voters have no doubt already cast their ballots. In quite a few other states, absentee ballots will go out this week. Minnesota and Maine will even start in-person voting this week. Here is the state-by-state schedule.

Democrats Are on the Offensive in the Culture Wars

Republicans used to use cultural issues like same-sex marriage and abortion to rev up their supporters and get them to vote. Now the shoe is on the other foot. It is the Democrats who are talking about cultural issues and scaring the voters with them. Not only has same-sex marriage gained enormous popularity in the past five or ten years, but Republican support for limiting birth control (such as in the Hobby Lobby case) is scaring women and driving them to the Democrats. Much of the Republicans' problem has to do with shifting demographics. In 1980, when Ronald Reagan was first elected, white voters without college degrees made up 65% of the electorate. In 2012, that number was 36%. Ever since Richard Nixon began his Southern strategy, Republicans have been basing their campaigns on getting older white men without college degrees to back them. They still do, but there aren't enough of them any more and it is beginning to be a real problem, hence the action in many states to limit who can vote (voter ID requirements) and when they can vote (shortening early voting periods). This year in states as diverse as Colorado and North Carolina, Democratic candidates are claiming that the Republicans are out of the mainstream. Such an approach was unthinkable 10 years ago, when it was the Republicans making these claims about the Democrats.

What Democrats in red states are also desperately trying to do is make the race between them and their actual opponent, not between President Obama and their opponent. In a new ad the Democratic candidate for the Senate in Kentucky, Alison Lundergan Grimes, literally says "I'm not Barack Obama" while shooting a gun. Then she shows a photo of her opponent, Sen. Mitch McConnell (R-KY), waving a gun with her saying he doesn't know how to hold it. The Republicans, in contrast, are running against Obama everywhere. Obama himself is not sitting idly by. In October he will begin serious campaigning, although he may be limited to states where he is relatively popular, such as Colorado, Iowa, and Michigan. And of course he can show up in New York and California any time he wants to in order to raise money for the DSCC.

Republicans Dream Big about Governing with a Senate Majority

Many Republicans have said what they would do if they controlled the Senate. They would repeal the Affordable Care Act, enact tax reform, roll back EPA regulations, and pass Paul Ryan's budget, which replaces Medicare with a voucher program. However, there is a small problem with these plans: it takes 60 votes to get anything done in the Senate and the best case scenario for the Republicans is probably 52 seats. Every time they try to pass something controversial, the Democrats will filibuster it. Potential majority leader Sen. Mitch McConnnell (R-KY) (assuming he wins his own election, which is not a sure thing), understands this very well, but will have to deal with tea party senators like Sen. Ted Cruz (R-TX) who don't seem to understand this. In principle, McConnell could abolish the filibuster once and for all, but he is far too smart to do this because he knows full well that half a dozen vulnerable Republican senators are up in 2016 and come Jan. 2017, the Republicans are very likely to be in the minority, no matter what happens in 2014. The last thing he wants is to find himself in the minority with filibuster gone--because he abolished it.

Normally in the midterm elections, the party in the White House loses dozens of seats in the House as shown by this chart: 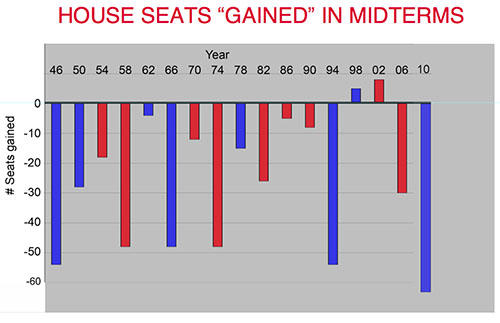 Except for 1998 and 2002, the President's party has lost House seats in every midterm election since WWII. The blue bars under zero show losses when a Democrat was President; the red ones show losses during Republican administrations. The losses are bipartisan. Also, 1998 was a special case because the election occurred after House Republicans had impeached Bill Clinton. Clearly the voters didn't think what he did was all that bad. In 2002, George W. Bush avoided big losses due to a "rally 'round the flag" effect after the attacks of Sept. 11. But barring some unexpected catastrophe, neither party expects a big change in the House this year.

In fact, House Republicans are complaining that the big Republican donors are betting all their money on Senate races and ignoring the House. House Republicans are not worried about losing the House in 2014, but they are very worried that a huge Hillary Clinton victory in 2016 could cause the House to flip then. The funding problem is illustrated by the fact that the American Action Network (the main outside Republican group funding House races) said it would spend $8 million until election day. The Democratic counterpart, the House Majority PAC, will spend $22 on TV alone. Also, the DCCC has raised $136 million to the NRCC's $109 million. So on election evening, the House Republicans will not be crying, but more likely wistfully thinking of what could have been.

Back when Sen. Rand Paul (R-KY) was just an unknown junior senator from Kentucky he said a lot of things that got him attention without worrying about where the chips would fall. Now that he is actively running for President, he is rapidly retracting many of his earlier positions. He used to favor stopping aid to Israel. No longer. He was formerly against an expensive fence with Mexico. Now he wants two of them. Same-sex marriage? They used to be morally wrong, but now it is more "let's talk about something else." As he campaigns, he is noticing that some positions are not going to get him very far in the Republican primaries. Given a choice between (1) being right and (2) being President, he used to favor (1) but now seems to prefer (2).

Politicians often sense how the wind is blowing and change their minds, but what was special about Paul (and his father, Ron Paul) is that he seemed authentic. He spoke his mind and didn't care what anybody thought about it. Now he cares a lot about what the Republican base thinks but if he changes too many positions, his primary opponents are going to clobber him with his inconsistencies.

Gov. Martin O'Malley's term as governor of Maryland is up in January and he is looking for a job. Both Maryland Senate seats are occupied by Democrats who don't look like they will be retiring soon, so what's a young governor to do? Run for Vice President. Of course, there is no official way to campaign for Vice President, so what O'Malley is likely to do is run for President on a positive platform. His strategy would be to run to the left of Hillary Clinton, emphasize his achievements as governor of Maryland (same-sex marriage, abolishing the death penalty, raising the minimum wage, encouraging green energy, etc.), and carefully avoid any personal criticism of her. If he gets, say, 20% of the votes and a lot of national attention from a press corps that feels it can't run stories only about the Republicans, he would suddenly become a national figure. One complication for him is that a run by Sen. Bernie Sanders (I-VT), even further to the left, might siphon off votes from the anti-Hillary crowd, but it is worth a shot. After all, Clinton knows it is valuable for the party to have a young dynamic Vice President who is poised to run in 2024. O'Malley will be 61 on election day 2024. Sanders will be 83 then.

In addition to the North Carolina polls discussed above, we also have a poll in New Hampshire showing that the race between Sen. Jeanne Shaheen (D-NH) and former Massachusetts senator Scott Brown (R) is tied. But there is also a poll showing Shaheen well ahead. Two partisan polls, one Democratic and one Republican (not listed) show both show Shaheen ahead. The conclusion here is that Shaheen is ahead and New Hampshire polling is having a bad hair day.