Why Democrats Can't Win the House

Even though Democratic candidates for the House got a million more votes in 2012 than did Republican ones, the Republicans got more seats. Part of the reason is the extensive gerrymandering done by state legislatures after Republicans captured many of them in their 2010 wave. But that is not the whole story. Another part of the picture is the fact that Democrats are packed densely into cities and Republicans are spread over vast rural areas. Here is the map of the results of the 2012 presidential election by county, with counties won by Obama in blue and counties won by Romney in red. 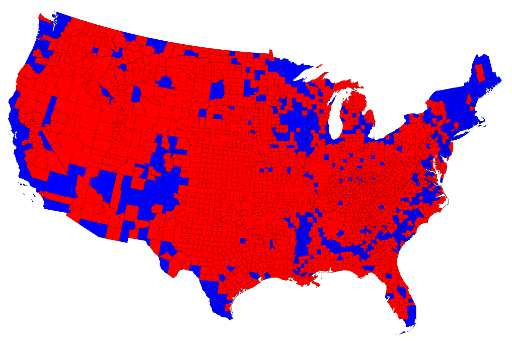 From the map, you might think that Romney won in a landslide, but he didn't because the blue areas are very blue (Obama won 80% of the vote in many big cities) and the red areas are less red (Romney got 60% or so in many rural counties). In Washington state, for example, a huge victory in King County (Seattle) can offset losing most of the rest of the state. However, for the House, getting 80% of the vote in one or two counties doesn't get you a House majority. Another example is Pennsylvania, which James Carville, a Democratic strategist, once described as Philadelphia and Pittsburgh with Alabama in between. Obama got 83% of the vote in Philadelphia and Pittsburgh but Romney won most of the other counties, where many of the state's House seats are based. Thus racking up massive wins in a couple of cities but losing by a small margin everywhere else is good enough to win statewide elections but not good enough to win the House. Thus a situation in which Democrats do well in presidential elections and Republicans control the House may continue for some time.

All the above notwithstanding, there is some action in the House races. Some swing districts do exist and some members have a personal issue that could cause them trouble. The Washington Post had made a list of the 10 most endangered representatives, as follows:

The reasons for the troubles vary. In Barber's case, it is a strong opponent in a district Romney won. In Grimm's case, it is a candidate who threatened to throw a reporter off a balcony, which tends to get you bad press and being under indictment doesn't help. While there is no doubt the Republicans will hold the House, the size of their majority matters for two reasons. First, speaker Boehner has a lot of trouble managing the tea party caucus and the bigger it is, the less control he has. If, for example, President Obama eventually decides to ease up on deporting even more people who are in the U.S. illegally, the tea party caucus could demand his impeachment and Boehner could have trouble keeping the lid on them. Second, in 2016, when Democratic turnout is much bigger than it will be in 2014, the Democrats may have a shot at taking back the House, but the deeper the hole is, the harder it will be for them to dig out.

While most primaries have already happened, the final round of primaries is tomorrow and there still could be some surprises. The most important one for the Senate is in New Hampshire, where former Massachusetts senator Scott Brown (R) is trying to convince New Hampshire voters that he is really one of them, despite having represented a different state in the Senate before. He is fighting against several tea party candidates but is expected to win big. There are also gubernatorial primaries on tap in Massachusetts, Rhode Island, and New York, but the favorites, Democrats Martha Coakley, Gina Raimondo, and Andrew Cuomo, are expected to win theirs.

Economic Realignment May Help the Democrats

It is well known that as minorities, especially blacks, Asians, and Latinos become a larger fraction of the electorate this demographic change will help the Democrats. However another (economic) change that is going on may also help them. The Washington Post has a story on this. In essence, the new economy values skills such as critical thinking, problem solving, working in teams and analyzing data. In general, professionals and people who benefit from education are trending Democratic and this is where the jobs are. These people tend to agree with the Democrats on social issues, the role of government, the legalization of marijuana, and women's reproductive rights.

Dark Horses Are Emerging for 2016 Already

With the 2016 presidential race already in full swing (!), people are talking not only about the leading candidates for the Republican presidential nomination, such as senators Rand Paul (R-KY), Ted Cruz (R-TX), and Marco Rubio (R-FL) as well as governors Chris Christie (R-NJ), Scott Walker (R-WI), and Rick Perry (R-TX), but also about dark horses. The Hill lists four possibilities in case the top tier candidates all flame out:

We agree that Pence and Kasich are potentially serious candidates. Conservative governors from the Midwest can make the argument they could bring in key Midwestern states and neither of these has made any significant blunders so far. Both of them are nationally unknown though and would be competing against much better known senators and governors. However, Christie, Walker, and Perry are all deeply enmeshed in scandals and senators have massive voting records for opponents to mine, so you never know. Carson and Bolton might run but neither will get any serious traction because the Republican establishment wants to win, not just feed an endless supply of red meat to the base.

We have a whole slew of new polls today, mostly from YouGov. We have included their polls with some trepidation as they do Internet polling rather than calling people on the phone. Doing this requires accurate models of the population since Internet polling is going to oversample high-income young white males and undersample poor older black females. Nevertheless, they have had a pretty good track record so far and traditional polling is getting more more and more iffy, with response rates under 10% and polls becoming extremely expensive as a result. The future of polling may well be Internet polling with massive statistical corrections, which obviously opens a whole can of worms about how accurate the pollster's model is and whether the firm is biased. Unlike Rasmussen, YouGov doesn't have any obvious bias, so we're going to include them.

Internet polling requires having a good idea of the electorate in many dimensions in addition to partisanship, gender, age, and income. Does marital status matter? How about religion? Race? Sexual orientation? The list is endless and if the pollster wants to correct for all these factors, it has to ask each respondent questions about them, which some people may feel is intrusive. In turn, this reduces the sample size and possibly in a nonrandom way.

As a result of all those new polls, the map is beginning to look like what would happen if the Democratic Senate candidates won all the states Obama won in 2012 and the Republican candidates won all the states Romney won. This effect also gives us some confidence in YouGov: it is almost perfectly predicting the conventional wisdom. If Georgia were to flip, we would have perfect alignment between the Senate 2014 and the presidential races in 2012: Republicans would win everywhere in 2014 where Romney won in 2012 and Democrats would win everywhere in 2014 where Obama won in 2012.

Today is a good example of where the tipping-point state chart is useful. If you want to see the easiest path for the Democrats to hold the Senate based on current polling, look there. You see that the hand in the "Dem seats" column points to Louisiana. This means "in principle" if the Democrats won in North Carolina and Louisiana that would give them 50 seats. In practice it is a bit more complicated because getting the most votes in Louisiana on election day isn't enough if Mary Landrieu is under 50% because there will be a runoff. If she loses the runoff, the Democrats will have to win the state under the hand, Arkansas, to keep control.