Half the GOP Delegates Will Be Chosen by March 15

The dates for the Republican primaries and caucuses are largely set now. You can see the date for any particular state by putting your cursor on the map above. But another way of looking at the calendar is seeing what percentage of the delegates have been chosen by a specific date. The chart below (with the raw data from the The Green Papers ) shows this. 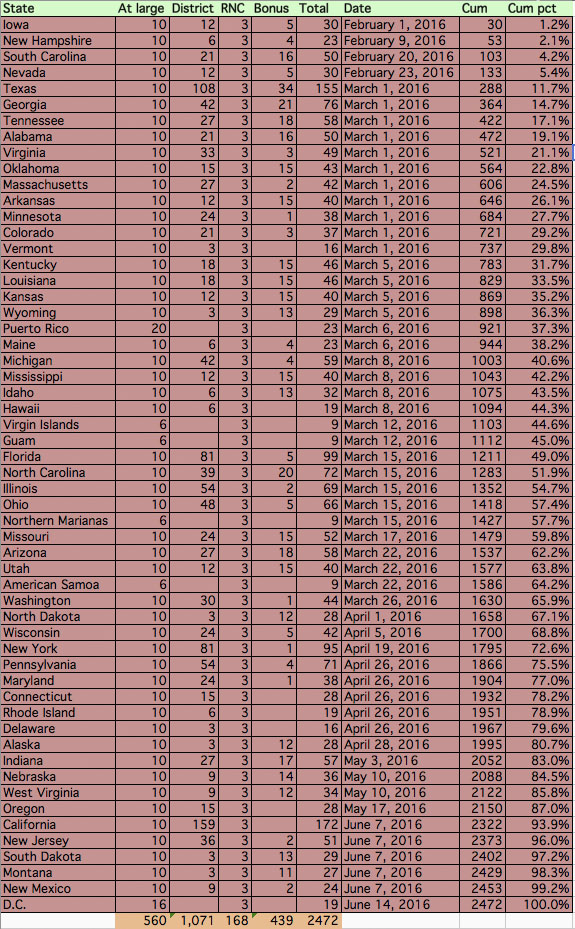 The "At large" delegates are chosen statewide whereas the "District" delegates are chosen based on congressional or state senate districts. All three RNC members from each state get to go to the convention, since it is formally their show. Some states get bonus delegates for electing Republicans at various levels.

That the primaries and caucuses are so front loaded is no accident. RNC chairman Reince Priebus wanted to avoid a knock-down-drag-out fight like in 2012. The idea was to get it over fast. However, because so many of the delegates are chosen in states that divide the delegates proportionally, relatively minor candidates may end up with quite a few delegates, making it harder for anyone to get the 1,237 needed to win.

An obvious consequence of the above table is that while all the pros are counting on getting rid of Donald Trump and Ben Carson in the end, the end had better come before March or the pair is going to start racking up a substantial number of delegates. If, say, they control 25% of the delegates at the convention, even if they are no longer in the race, they could wreak havoc with the planning.

Further, a huge and fragmented field combined with 45% of the delegates being chosen proportionally could conceivably lead to every political junkie's dream: a brokered convention. Even if the field is eventually narrowed to Trump, Sen. Marco Rubio (R-FL), Sen. Ted Cruz (R-TX), and Jeb Bush, it is possible that no one has a majority when the convention starts. Needless to say, the party establishment will do everything it can to prevent this scenario, but the rules make it at least plausible, which means that Priebus' strategy could backfire on him (V)

Emory University's Alan Abramowitz, one of the most respected political scientists in academia, writes that it is seeming more and more likely that the Republican nominee will be Donald Trump. He gives nine reasons:

These are good points, though Abramowitz may be overlooking some important considerations. To start, recall that Ben Carson was actually leading in national polls just a few weeks ago, and he's now in near free fall. There is plenty of time for the Trump house of cards to come tumbling down, and the cause could be something entirely unforeseeable. Second, Trump has fairly well solidified himself as the "outsider" candidate, and seems to have much of that support locked up. But where is his room for growth? The voters defecting from Ben Carson do not appear to be going over to Trump, but instead to Ted Cruz. If 70% of the GOP voters who are not currently supporting Trump line up behind the last remaining establishment candidate—Rubio, Cruz, or Bush—then that candidate will have a majority. (Z)

81% of Americans Don't Trust the Government

A study from the Pew Research Center shows that only 19% of Americans trust the federal government to do the right thing all or most of the time. Of course, Americans are sharply divided on what "the right thing" is, so getting to 50% would already be difficult. For example, if 40% don't trust the government to protect a woman's right to choose and 40% don't trust the government to protect unborn children, you get to 80% pretty fast but there is little the government can do to get to the 78% it was during the Johnson administration. The country is too polarized for that. Here are the results of polls asking this question from the mid-1950s onward. 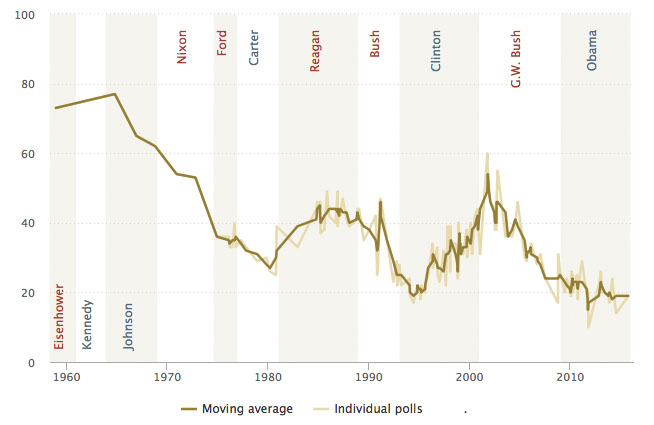 The graph above is a composite for all Americans, but when it is divided up by partisanship, we get a somewhat different picture. Democrats tend to have a constant view, no matter who the President is, but Republicans' opinion of the government rises sharply with a Republican in the White House and drops sharply when a Democrat occupies the oval office. Still, with so few people trusting the government, it is clear why anti-establishment figures who promise to blow the government up get traction. A lot of people feel the government is not working for them and want to "throw the bums out." This view has been common in the past, but normally "the bums" meant the other party. Now Republicans include their own leaders in the category of "bums." That is new and helps to explain the Trump phenomenon. (V)

The New Hampshire Ballot Commission has ruled that Sen. Bernie Sanders (I-VT), Donald Trump, and Ted Cruz may appear on the New Hampshire primary ballots. Sanders was challenged by a Republican on the basis of a New Hampshire state law that says a candidate must be registered to vote in the party whose primary he is running in. Since Vermont does not register voters by party, Sanders got a pass from the commission. The complaint against Trump that he didn't hold Republican values was quickly dealt with.

Cruz is a more complicated case. The issue with him is whether he is a natural-born citizen as required by the Constitution. He was born in Alberta, Canada to an American mother and a Cuban father. As we discussed at length before, a child born abroad to one American parent and one foreign parent is a U.S. citizen only if the American parent meets certain additional conditions, in particular, that the American parent lived in the U.S. for a stipulated period of time prior to the birth. Cruz has never proven that his mother met the residence requirements and it is not clear if the commission investigated the matter fully. Be that as it may, he is on the New Hampshire ballot, but may yet face requests for his mother's phone bills and college transcripts to prove her residency. Unlike the nonsense about President Obama's birth certificate, there are legitimate questions about Cruz' citizenship because U.S. law says that merely having an American mother does not automatically convey U.S. citizenship. At the time of his birth, Cruz was (also) a Canadian citizen, but he has subsequently renounced his Canadian citizenship. (V)

Does Clinton Have a "Wall Street" Problem?

The AP has done an analysis of the various disclosure forms that Hillary Clinton has filed, and has concluded that she and her husband have received at least $35 million from financial services, real estate and insurance companies after leaving the White House in 2001. This is, of course, on top of the contributions that the finance industry made to her campaigns for the U.S. Senate in 2000 and 2006.

This could, of course, give credence to the charge made by Bernie Sanders and various Republican candidates that Clinton is in bed with Wall Street. One can imagine "$35 million" becoming a political meme, like "swift boaters" or "binders full of women" or "the 47%." However, this could also prove to be much ado about nothing. To get to that $35 million figure, the AP is blending together money from three rather distinct industries that aren't necessarily on the same page about things (not to mention blending together money made by both Hillary and her husband). And there is no particular reason to think that past fees for services rendered equates to some sort of lifetime indenture—indeed, Clinton could well take an especially hard line against Wall Street to underscore that she has not been bought and paid for. Finally, if Donald Trump is the Republican nominee, then Hillary's connections to Wall Street will seem quaint by comparison. (Z)

Clinton Apologizes for Use of Term "Illegal Immigrant"

At a town hall meeting earlier this month, Hillary Clinton—speaking extemporaneously—made reference to "illegal immigrants" as opposed to the more gentle "undocumented immigrants." During a Tuesday Facebook chat sponsored by Telemundo, she apologized for her phrasing, writing:

That was a poor choice of words. As I've said throughout this campaign, the people at the heart of this issue are children, parents, families, DREAMers. They have names, and hopes and dreams that deserve to be respected.

This is going to be a major theme of Clinton's campaign—not necessarily apologizing, per se, but showing a high level of sensitivity to the concerns of Latino voters, and making extra time for events hosted by Telemundo, Univision, and other Spanish-language media (while also being willing, apparently, to snub the progressive group MoveOn). If Clinton gets her Christmas wish and faces Donald Trump in the general election, she will present herself as being the Donald's polar opposite on immigration issues, what with his talk of deportation and walls. In that scenario, she will probably make a few bets with her campaign manager that she can do as well with Latinos as Barack Obama did with black voters in his two campaigns (93%). If Trump is not the candidate, it is still probable that Clinton will be facing a candidate who is trying hard to court the Latino vote, either by virtue of their Cuban heritage (Ted Cruz, Marco Rubio) or their Mexican wife (Bush), thus requiring her to play defense. Whatever the case may be, the Latino vote is shaping up to be a big part of the story in 2016. (Z)

Rubio-backed Provision Could Cripple the ACA

A relatively unknown provision of the Affordable Care Act ("ObamaCare") protects insurance companies from losses in the early years of the ACA's operation, when it is expected mainly sick people will enroll. The provision, known as "risk corridors," provides that the Dept. of Health and Human Services reimburse insurance companies for certain losses early on if they take part in the ACA. In 2014, Marco Rubio managed to insert a rider into a spending bill that passed preventing HHS from using money from other programs to fund the risk corridors, with the very real possibility of it being unfunded and insurance companies leaving the exchanges. Rubio's tactical move is being applauded on the right and could help him in the primaries. It is all rather arcane, but if Rubio and Hillary Clinton are the general election candidates, Rubio is now wedded to destroying the ACA whereas Clinton is on record to wanting to keep it and strengthen it. As a result, the healh-care law could be a major battleground in the general election, with tens of millions of people worrying about losing their health insurance. (V)

In most states, after criminals have served their sentences, it is possible for their voting rights to be restored. This was not true of Kentucky until now. However, outgoing governor Steve Beshear (D-KY) just accomplished the restoration by executive order. Felons who are currently under arrest or who committed especially serious crimes are not eligible. Since criminals tend to come mostly from poor backgrounds, which skew Democratic, Beshear's order will help the Democrats, although in very red Kentucky even the 180,000 new Democrats is not likely to make a difference. (V)