What to Look for in the Debate Tonight

The top 11 Republican presidential candidates face off tonight at the Ronald Reagan Library in Simi Valley, CA. It is a high-stakes event for most of the participants. Here are some things to watch for.

Possibly the most exciting boxing match tonight will be Trump vs. Fiorina. Trump recently said of Fiorina: "Look at that face! Would anyone vote for that?" At the National Federation of Republican Women's convention last weekend she retorted: "This is the face of a 61-year-old woman. I am proud of every year and every wrinkle." Fiorina has everything to gain from going after him personally ("With all your money, why did you buy a cheap toupee on sale at Walmart for $39?) and/or professionally ("Unlike some of us on this stage, I've never gone bankrupt even once, let alone four times"). If she can get in a couple of clever sound bites, they will be replayed thousands of times tomorrow and she will zoom.

Dana Milbank of the Washington Post has some advice for all the non-Trump candidates: don't treat him as a candidate, treat him as a schoolyard bully. Go to StopBullying.gov and do a global substitution replacing each mention of "child" by "candidate." This explains why Jeb Bush's strategy of silence just makes the bully think his behavior is fine. Ted Cruz' strategy of encouraging the bully just enables him more. Roger Ailes (CEO of Fox News) alternately praises and admonishes the bully, which just makes him stronger. RNC Chairman Reince Priebus begged him to be nice. Never works. The Website's recommendation for dealing with bullies is for responsible adults to intervene instantly, consistently, and harshly when the bully goes out of bounds and make it clear his behavior is not acceptable. Milbank suggests that moderator Jake Tapper should do that tonight.

Besides the bullying and various fights between the insiders and outsiders, a key question is which of the insiders will emerge as the establishment choice when Trump finally collapses. Will it be Bush, Rubio, Walker, Kasich, or (unlikely) Paul?

Be Wary of Polls This Early

Republicans are panicking as Donald Trump goes up in the polls; Democrats are panicking as Hillary Clinton goes down in the polls. But polls this early are not all that reliable. Eight years ago at this point, Rudy Giuliani and Fred Thompson led the Republican polls and Hillary Clinton had a crushing 18-point lead over newbie senator Barack Somethingorother. Events can change the standings very quickly. Remember how Rick Perry, at one point the front runner in 2012, destroyed his career in 15 seconds by not being able to count to three? For example, something could happen in tonight's debate that suddenly moves a candidate way up or way down.

If you can't trust the polls this early, what else is there to look at? Sometimes pollsters ask two questions: "Who are you going to vote for?" and "Who do you think will win?" These aren't the same thing. For example, when questioned, a supporter of Chris Christie might say (1) Chris Christie, (2) Jeb Bush. This second question is a different data point and often useful.

However, there is also a third way of getting a handle on the election: what people do when their own money is at stake. The Iowa Electronic Markets allow people to place bets with real money on real-world events, such as which party will win the White House in 2016.

It works like this. You buy a futures contract on a specific event, such as a Democrat winning the White House. The price of the contract is determined by the market, just as with all futures contracts. So if you think the Democrats will win in 2016, this morning you could buy 100 shares of DEM16_WTA for $59.80. If a Democrat wins, you get $100. If some other party wins, you lose your money. f you think a Republican will be elected in 2016, you can 100 shares of REP16_WTA at the bargain price of $40.40. If a contract were available for the Libertarian Party winning (which it is not), the market would probably price 100 shares for a few pennies. Later in the year futures contracts for specific candidates will probably be available. 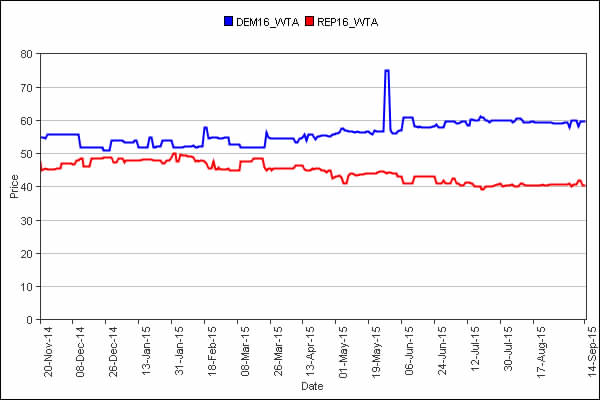 The Empire Strikes Back

Everyone knows that sooner or later the Republican establishment would take on Donald Trump. Well, it's sooner and it's here now. The Club for Growth has announced a $1 million ad buy in Iowa to run negative ads against Trump starting tomorrow. The two 30-second ads focus on his past support for liberal policies, such as single-payer health insurance. This will be an interesting test of how much damage such ads can do. If, as commonly thought, Trump's popularity is not due to his policy positions, but due to his willingness to say #?***!$#@*$!! to the Republican leadership, the ads may not have much effect. You can be sure a lot of people will be studying Trump's standing in Iowa before and after the ad campaign.

Could McCarthy Replace Boehner as Speaker?

Members of the conservative House Freedom Caucus want to shutdown the government if they can't get their way on defunding Planned Parenthood. House Speaker John Boehner does not want a shutdown since he knows the Republicans will get blamed and it could hurt them in 2016. But Boehner doesn't have enough Republican votes to pass the necessary funding bill so he is in a pickle. One way out is for him to go to Minority Leader Nancy Pelosi (D-CA) and say: "Nancy, I have to talk to you, but first I need a cigarette. OK, I'll make you a deal. I'll bring a clean bill to fund the government to the floor and you tell the Democrats to vote for it. After it passes, it's Mitch's problem. When the crazies in my caucus try to remove me as Speaker, your folks support me. Deal?" That could work because the Speaker is elected by the entire House, not by the majority caucus.

Up until now, scenarios with conservatives trying to oust Boehner have run into a problem: who would be the new Speaker? Now they are warming to the idea of Majority Leader Kevin McCarthy (R-CA) as the new Speaker. McCarthy hasn't taken sides yet, but the threat of toppling Boehner if he makes a deal with Pelosi becomes more realistic if there is a potential alternative Speaker lined up.

Is the Country Coming Apart at the Seams?

Ronald Brownstein has an insightful piece in the National Journal about how the country is coming apart. It is e pluribus unum in reverse. In particular, the Republican base is deeply upset about demographic and cultural changes the country is undergoing and a lot of this anxiety is reflected in the rise of outside candidates who they hope can do the King Canute thing and command the tide to stop.

Immigration and demographics are only part of the picture. Another piece is the tension between black leaders and the police. Black leaders and Democrats in general feel the police are gunning down innocent, unarmed blacks for no reason at all while many Republicans feel it is the police who are under siege.

A third area which societal changes are very unsettling to many Republicans is the attitude toward gays and same-sex marriage. It used to be that gays hid deeply in the closet and it was easy to pretend they didn't exist. Now they are demanding their constitutional and legal rights. much like blacks did in the 1960s. For people who were raised in churches that proclaimed homosexuality is an abomination, this is hard to accept.

All these changes are tearing the fabric of the country apart in ways that will take a very long time to repair. Maybe it won't happen until most of the old people who cling to the past have died off (or at least have Alzheimer's disease).