Can a Disorganized Party with 17 Candidates Beat an Incumbent Party?

A question on everyone's minds now that Labor Day is past is: "Can an opposition party with a sprawling 17-candidate field that has no front-runner and whose candidates are all over the map beat a largely unified incumbent party to recapture the White House?" Let's look to history for a guide. In 1976, Republican President Jerry Ford was running for election to an office he acquired by a rather unorthodox route. In 1972, the Richard Nixon/Spiro Agnew ticket was reelected. On Oct. 10, 1973, Agnew resigned the vice presidency as part of a plea bargain for accepting $268,000 in bribes when he was governor of Maryland and failing to pay income tax on them. As a lawyer, Agnew surely knew that bribes received must be reported as "earned" income. In accordance with the newly ratified 25th Amendment to the Constitution, President Nixon nominated House Minority Leader Ford for the vice presidency. The Senate quickly confirmed Ford 92 to 3, even though he had never represented anything larger than Grand Rapids, MI before. When Nixon resigned on Aug. 9, 1974 in the Watergate scandal, Ford became President. On Sept. 8, 1974, Ford issued a full pardon to Nixon, something that proved extremely unpopular. Nevertheless, Ford decided to run for a full term in the 1976 election.

With a weak, unelected, and unpopular Republican in the White House, the Democrats smelled blood in the water. Everyone and his uncle decided he could beat Ford. No fewer than 17 Democrats contested the Democratic nomination, which as a result of the 1968 fiasco, was largely determined by primaries and caucuses rather than by party pooh-bahs in a smoke-filled back room.

The Democratic field was extremely strong, consisting of five sitting governors, six sitting senators, a sitting representative, a former senator, a former ambassador to France who was also President Kennedy's brother in law, and 3 minor candidates. The candidates ranged from very liberal, such as Sen. Walter Mondale (D-MN) to completely reactionary, such as Gov. George Wallace (D-AL). There was no front runner, although many observers thought that Sen. Henry M. "Scoop" Jackson, a New Deal liberal on domestic issues and a hawk on foreign policy, would be the most electable. Here are the candidates. Politico has a nice piece about them.

To everyone's surprise, Gov. Jimmy Carter (D-GA) won Iowa and New Hampshire, which gave him massive free publicity. The race continued to be a free-for-all though, with seven other candidates winning at least one primary or caucus. In the end, the unknown governor from the South, Carter, managed to come out on top and claim the nomination. His strategy was to run in the South as a favorite son and in the North as a conservative Christian focused on rural voters. He was also tireless, having traveled 50,000 miles through 37 states and delivering 200 speeches before anyone else even announced for the race. Wikipedia has a detailed article on the 1976 Democratic primaries.

In the general election, Carter got 50% of the popular vote to Ford's 48%. The electoral college map looked like this, with the Democrats taking Texas and Alabama and the Republicans taking California and Illinois: 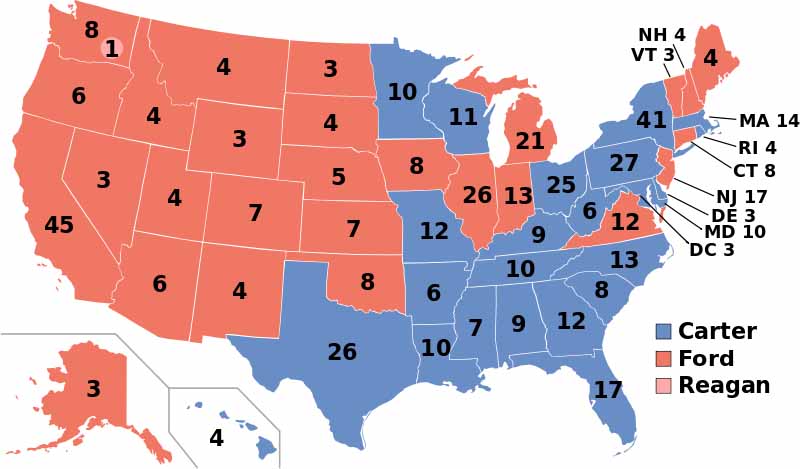 What can we learn from 1976 (other than that the 1976 map looks different than the 2012 map)? The main takeaway is that even when you start with a huge field pointing every which way, one candidate can emerge relatively unscathed to take the nomination and even beat a sitting President. A second takeaway is that even a strong field with half a dozen well-known senators, a completely unknown candidate far outside the mainstream can win the nomination through perserverance and a good strategy. A third lesson is that not all the candidates last long. Sanford and Mondale dropped out before Iowa. Most of the others dropped out in the Spring. Only Carter, Brown, McCormack, and Udall actually were formally nominated at the Democratic National Convention, and all but Carter dropped out after having been nominated. We can certainly expect that most of the 17 current GOP candidates who don't have billionaire sugar daddies will drop out either in the Fall, when their money runs out, or after lightning fails to strike in Iowa and New Hampshire. After Super Tuesday (March 1) most likely fewer than half a dozen candidates will still be around.

But maybe the biggest lesson is that personality matters more than policy. Carter was widely perceived as a genuinely honest, decent, and religious person. Many people were attracted to that, even if they weren't 100% on board with his politics. To a large extent, the popularity of this year's outsiders is their willingness to say what they think and convention be damned. While it still seems unlikely that any of the nonpoliticians will be nominated, it is their personalities more than their policies that are making them popular.

Of course, 1976 and 2016 differ in some ways. In 1976, all but one of the candidates were current or former elected or appointed officials and the winner was a sitting governor. Also there was no one like Donald Trump in the race saying things the party abhorred and getting 90% of the media attention as a result. How and when Trump exits and what happens after that has no parallel in 1976 or probably ever. There have been oddball candidates before but never one who has dominated the race and the media as Trump has.

Yesterday former Arkansas governor Mike Huckabee and Sen. Ted Cruz (R-TX) rushed to meet the Rowan County, KY, clerk, Kim Davis, who was jailed for refusing to grant marriage licenses to same-sex couples and then released. The judge who found Davis in contempt and ordered her to jail, David Bunning, is the son of a former Republican senator from Kentucky and a George W. Bush appointee, so this is hardly a partisan witch hunt. Cruz and Huckabee hope to pick up votes from evangelicals by supporting Davis.

However, historically, this kind of grandstanding rarely makes a difference. Sometimes it can even be counterproductive. Basically, Huckabee and Cruz are approving Davis breaking the law by refusing to abide by a Supreme Court decision legalizing same-sex marriages. Many Republicans, including a number of the presidential candidates, do not approve of breaking the law just because you believe the law is wrong. In June, removal of the Confederate flag from the South Carolina statehouse was a hot issue but the candidates who supported the flag, including Huckabee and Cruz, didn't get a bump in the polls as a result of their support. But in a field of 17 candidates, some of them will grasp at any straw to try to get attention.

Under pressure from continuous news coverage of her use of a private email server at her home, yesterday Hillary Clinton apologized for using the server. She said: "That was a mistake. I'm sorry about that. I take responsibility." She didn't point out that Republican Colin Powell also used a private server when he was Secretary of State. Nor did she mention that Jeb Bush used a personal email server for official business when he was governor of Florida. She also did not mention that even if she had used the official server at the State Department, she wouldn't have been allowed to use it for secret information because it was not secured. But the constant news about the email server finally forced her to say something. At the time she set up the server, she probably didn't think it was such a big deal since other government officials had done the same thing in the past and nobody ever said anything about them. By now she is probably secretly hoping that Vice President Joe Biden jumps into the race so the media will have something else to write about.