Many of the factors that may have contributed to Hillary Clinton's loss on Nov. 8 are unknowable (e.g., suppose she had campaigned in Wisconsin), but one of them has now been quantified. An analysis by Sam Wang shows clearly that the letter written by FBI Director James Comey in October cost Clinton about 2% nationally in the end. If it also cost her 2% in each state, that would explain why she lost Michigan, Pennsylvania, and Wisconsin, and why the polls were off. Basically, everything changed in the final week and there was no time for the polls to catch up to the changed public sentiment. Here is Wang's graph.: 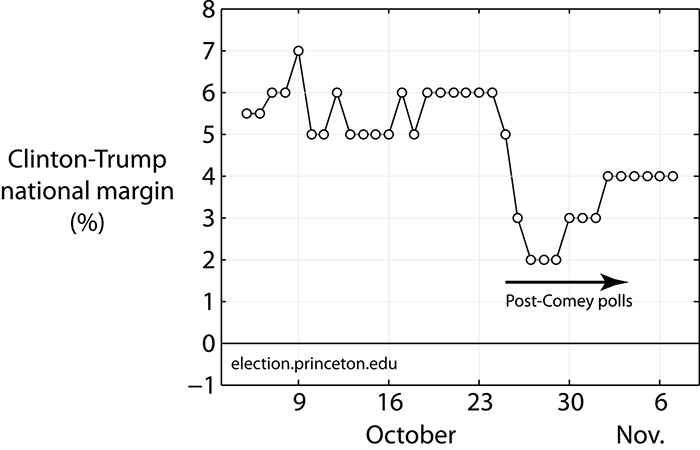 In short, Clinton dropped 4 points directly after Comey's announcement. The announcement completely dominated the news. There is no other explanation for such a sudden drop. She eventually recovered 2 of those points, but ended up 2 points lower than she was. As can be seen from Charlie Cook's current data, even a Comey-effect as small as 0.7% would have flipped Michigan, Pennsylvania, and Wisconsin, and a Comey effect of 1.2% would also have flipped Florida. Here are the current totals for these four close states:

Thus, while we can't say what would have happened if Clinton had campaigned more in the Midwest instead of wasting effort in Arizona and Georgia, it does look like Comey's announcement was just enough to pull Trump over the finish line first. (V)

Appearing on Fox News Sunday yesterday, Donald Trump said he does not believe the CIA's conclusion that Vladimir Putin intervened in the U.S. election in order to help him. Literally, he said: "I think it's ridiculous. I think it's just another excuse. I don't believe it." The intelligence community thinks otherwise.

Senior Republicans all supported Trump's view. It would be suicidal to say: "Without Vlad's help, we would never have made it." So, these pro-forma denials don't mean a lot. President Obama has tasked the CIA with producing a final report before he leaves office. If the CIA releases the report on Jan. 19 or Jan. 20, and it definitely concludes that Trump was helped by Putin (even a 1% shift matters a lot, as shown above), it would get Trump off to a rough start with the intelligence agencies. If they give him advice and he intentionally ignores it because he doesn't trust them, it could lead to trouble. We have had a situation before when the intelligence community warned the president of an upcoming problem and he ignored it. On Aug. 6, 2001, George W. Bush received a briefing entitled "Bin Laden Determined to Strike in U.S." and Bush ignored it. If Bush had immediately taken action to tighten airport security, etc., 9/11 might not have happened. (V)

What Would the Democratic Version of Trump's Team Look Like?

The appointments that President-elect Donald Trump has made, so far, have raised quite a bit of ire among Democrats. Not only are these individuals' politics being questioned, so too is their very fitness for the jobs they plan to assume. But Washington, of course, is known for its rapid outbreaks of "shoe is on the other foot" syndrome. Republicans, for example, could think of no worse crime than leaking classified information, right up until Michael Flynn and David Petraeus were under consideration for jobs, and then it didn't seem so bad after all. Democrats, for their part, were big opponents of SCOTUS justice filibusters throughout 2016. Now, they are poised to become major fans of the practice.

As a thought exercise, then, we propose to construct the mirror image of Trump's team—people of similar qualifications/background, but opposite politics. Perhaps this will help to sort out the extent to which concerns about Trump's cabinet are rooted in legitimate concerns, and how much they are simply the product of differences of political opinion.


So, there we have it. On review, it seems that there are some pretty clear categories that we might divide the Cabinet(s) into. Some members are entirely reasonable and qualified (i.e. Mattis/Clark, Pompeo/Moulton). Others are qualified but very controversial (i.e. Sessions/Ellison, Pruitt/Kennedy). Still others range from unqualified (Haley/Harris) to wildly unqualified (Carson/West). Of course, each left-leaning reader can judge for themselves how willing they would be to grit their teeth and bear it if the politics were ok, but the resume was still problematic due to past behavior or lack of experience. (Z)


As president, Trump will be in brand new territory, both for himself and for the nation. He is used to giving orders. Speaker Paul Ryan (R-WI) and Senate Majority Leader Mitch McConnell (R-KY) are not used to following orders—from anyone. What happens when Trump wants something they don't want? What happens if one or more of his cabinet appointments are rejected (Rex Tillerson, for example)? Will Trump explode? What happens if a terrorist blows up a building Trump owns in the U.S. or abroad? How will be react? There is so much that no one (Trump included) knows about how things will play out during the next four years. (V)

Carl Bernstein, of Watergate fame, knows a little something about presidents and bad behavior. And, as one of the deans of American journalism, he can get away with saying things that may not fly from his junior colleagues. Appearing on CNN Sunday, he pulled no punches in his assessment of the coming Trump presidency:

No president, including Richard Nixon, has been so ignorant of fact and disdains fact in the way this President-elect does. And it has something to do with the growing sense of authoritarianism he and his presidency are projecting. The danger of it is obvious and he's trying to make the conduct of the press the issue, not his own conduct...He doesn't go to a fact-based argument. He goes to an emotional argument.

Bernstein was particularly unhappy about Trump's response to Chuck Jones, the Indiana union leader who has been critical of the President-elect's deal to save jobs at Carrier. He also suggested that reporters are entering into uncharted waters, and that they must stay the course, regardless of the pushback from Trump or his supporters. It's looking like it will be a rocky four years. (Z)

According to unnamed sources (probably sources located in Trenton, NJ), Gov. Chris Christie (R-NJ) was offered a number of positions in the Trump administration, including Secretary of Homeland Security, Secretary of Veterans Affairs, ambassador to Italy, and others. The Governor, who reportedly was promised the Attorney Generalship, turned down these various consolation prizes.

Christie has one year left as governor of New Jersey, and that seems likely to be the end of his career in politics—a swift and remarkable decline for someone who's just 18 months removed from being one of the favorites (and maybe the favorite) for the Republican presidential nomination. He's radioactive in The Garden State, thanks to Bridgegate, so a run for Congress is not likely in the cards. He pursued the chairmanship of the RNC, but appears to have lost out on that. He's declined appointment to the various posts Trump offered. Only Christie knows what his plans are, but the likeliest options seem to be a nice, cushy job at a law/lobbying firm, or maybe a federal judgeship. (Z)