•  Sanders and Trump Lead in Iowa, but with a Footnote
•  Republican Leaders Are Arguing About Whether Trump or Cruz is the Biggest Threat
•  National Review Tries to Take Down Trump
•  Is Palin Not All She's Trumped Up to Be?
•  "Thanks, Obama!": Ted Cruz Edition
•  GOP Establishment Not Yet Sold on Rubio
•  Clinton Tweaks Approach to Sanders
•  Democrats Want A Debate Between Iowa and New Hampshire


Sanders and Trump Lead in Iowa, but with a Footnote

Turnout is hugely important and very hard to predict. Trump's supporters are largely blue-collar workers, and they have a spotty track record of going to the caucuses. Similarly, Sanders supporters are largely young voters, and they often often go to rallies but not to the polls. A huge turnout like 300,000 basically assumes all the marginal voters will show up. If turnout is much less, many of the missing people will be Trump and Sanders supporters. The only pollster who can be trusted for the Iowa caucuses is Ann Selzer, who has been doing them for years and is much better than anyone else at figuring out which of her respondents will actually caucus.

Another place where turnout is basically decisive is the difference between presidential and midterm elections. In 2014, 40 million fewer peopled voted than in 2012. Most of the missing voters were Democrats. A consequence of loyal voters (mostly Republicans) going to the polls every 2 years and marginal voters (mostly Democrats) going to the polls every 4 years is that Republicans sweep the midterms (which gives them control of the state legislatures) and Democrats win the White House. This is a perfect formula for endless gridlock. (V)

Factions within the Republican Party are arguing about whether Donald Trump or Sen. Ted Cruz (R-TX) poses the biggest threat to the Party. Conservative intellectuals see Trump as a populist, not as a conservative, and one whose nomination would badly hurt the conservative movement. They also fear that he sees his greatest skill as a negotiator, and he would be happy to negotiate deals with the Democrats, something the conservatives abhor. They fear if he is nominee, he will destroy the conservative movement they have nurtured for decades. They can live with Cruz, even if he loses the election because the Party has recovered from factional battles before, such as the struggle between Barry Goldwater and Nelson Rockefeller back in the 1960s.

On the other hand, nearly all Republican senators despise Cruz for campaigning against them and being so rigidly hard-right. They also are scared of his small-tent approach to politics: Only true-blue conservatives who think like he does are welcome in the Party. They are afraid of a slaughter downticket on election day. (V)

As the GOP establishment begins to reconcile itself to the notion that its choice may be the lesser of two evils between Donald Trump and Ted Cruz, more and more lines are being drawn into the sand. The National Review, the most influential conservative magazine in the country, is going to enter the fray, dedicating an entire issue to denouncing Trump.

The essays in the special issue, which hits newsstands Friday, are penned by an all-star team of authors representing a broad swath of conservative constituencies. They've got Reagan-era stalwarts (Ed Meese) and young bucks (Erick Erickson). They've got neocons (Bill Kristol), social conservatives (Brent Bozell), and libertarians (David Boaz). They've got intellectuals (Yuval Levin) and, well, not-so-intellectuals (Glenn Beck). The upshot is that, on the GOP side of the contest, things are getting bloody. And just maybe, this kind of vicious infighting, with Republicans turning against one other, is what the Party needs to spur its long-anticipated reinvention of itself.

Here is what the cover looks like. The founder, William F. Buckley, would no doubt heartily agree with the sentiment. 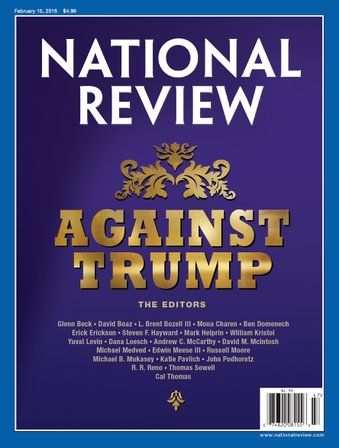 If it comes down in the end to a battle between Trump and Cruz we might see the oddest of spectacles: the conservative movement at war with the Republican Party. The conservatives would support Cruz and the Republicans (however grudgingly) would support Trump. A long ideological battle for the soul of the Republican Party could result in a lot of PUMA (Party Unity My Ass) voters in the general election, who would prefer to see a Democrat win to punish the Party for choosing the wrong nominee. On the Democratic side, the chance for a real schism is much smaller because the candidates are really not that far apart compared to the Republicans. Also, if Hillary Clinton wins, she could easily placate Sanders and get his endorsement by picking a strong progressive as Veep, for example, Sen. Sherrod Brown (D-OH), who also happens to come from a key swing state. (Z & V)

Is Palin Not All She's Trumped Up to Be?

Several years back, the satirical newspaper The Onion ran a story about Jesus' conversion to Islam, along with his declaration that he would henceforth be known as Isa Ibn Maryam al-Salaam Christ Shabazz. The article "quotes" a number of Christians, some of whom declare that they will follow Jesus' lead, others flatly refusing. "Approximately half the members of the Vatican's College of Cardinals have advocated embracing Islamic law," the story explains, "while the other half is calling for Christ's immediate excommunication."

Though facetious, the piece raises the most important question related to Sarah Palin's endorsement of Donald Trump: Is she a leader, one whose fans/followers will be influenced by her opinion? Or is she merely a symbol of already-held beliefs, only useful as long as she continues to embrace those precise beliefs? The early returns suggest the latter, as the platforms where Palin followers can give direct feedback—Facebook, for example—are full of messages expressing shock and disappointment at her endorsement of Donald Trump. "Sarah, I have lost all respect for you," reads one, while another declares that, "Trump supports gay marriage...he is anything but a conservative."

Yesterday, we commented on the risks of embracing someone who shoots from the hip as often, and as carelessly, as Palin does (note that while Trump himself may appear to to do so, his statements are considerably more calculated). Her latest—blaming PTSD/Barack Obama for her son's domestic violence incident—is already getting a lot of blowback from veterans. If she can't put some evangelicals and social conservatives in The Donald's column, then she could become a millstone around his neck very quickly. (Z)

Ted Cruz, who has promised over and over that he will dismantle Obamacare, now says he is without health insurance. He blames his lack of coverage on, you guessed it, Obamacare, saying that he purchased an ACA policy through Blue Cross Blue Shield in Texas, and that his policy was canceled when the company left the healthcare exchange at the end of 2015.

While the narrative might be literally true, Cruz is spinning like crazy here. Needless to say, there are other policies available for purchase in the world, particularly for someone with seven-figure wealth in the bank. Further, Cruz is entitled to heavily-subsidized health insurance as a federal government employee, should he choose to take it. Cruz used to get his insurance through his wife, Heidi, who was an executive at Goldman Sachs, but she took leave to campaign with her husband, and temporarily lost her insurance. None of these choices that Cruz (and his wife) have made have anything to do with Barack Obama or the ACA, of course.

Beyond that, it is worth asking exactly what point the Senator is trying to make. He hates Obamacare, but signs up for a policy anyhow? Then, once that policy goes away, he can't get healthcare anymore? One might well walk away with the lesson that Obamacare fills an important gap in the marketplace, and that if it goes away, then many Americans will once again be left without health insurance again. Perhaps Cruz's message would be clearer if he used his campaign website to explain his superior alternative plan, but he hasn't thought of one yet. (Z)

GOP Establishment Not Yet Sold on Rubio

With some Republicans scared of Trump and others scared of Cruz, Sen. Marco Rubio (R-FL) was supposed to be Plan C, but so far most party leaders and donors have been somewhat skittish about backing him. He's young and looks great on television, but he is still untested on the national stage and some people see him as a lightweight. A lot of Republicans would still actually prefer Jeb Bush. But if the voters don't want Bush, they are going to have to find someone else, and Rubio is one of their limited options.

Part of Rubio's problem is that many leaders wonder if he can appeal to evangelical voters, a major piece of the Republican primary electorate. So far, Trump, Cruz, Carson, and Huckabee have been getting most of the attention from that wing of the Republican Party, and not Rubio.

Rubio's case wasn't helped when Sen. Lindsey Graham (R-SC) dropped out and—to everyone's surprise—endorsed Jeb Bush, implying that Rubio was still wet behind the ears. Bush has more endorsements than any of the other Republicans in the race, but some people feel these are endorsements of the Bush family in general and were given out of loyalty more than for actual support of Jeb. Given how long the race has already gone on, it may seem surprising that most Republican leaders still haven't picked sides, but this is in part because they want to be with the winner and it is by no means clear yet who that will be. (V)

As Hillary Clinton began to feel the Bern last week, she turned her (carefully controlled) guns on the Vermont Senator, in particular lambasting his healthcare plan. She had daughter Chelsea do the same at several campaign stops. By all indications—most obviously the donations that flowed into the Sanders campaign coffers—the attacks were ill-advised, and served primarily to alienate voters that Clinton hopes to capture, if not in the primary season, then in the general election.

As a seasoned politician, Clinton really should have known better. Sanders is likable and genuine, and undoubtedly reminds many voters of their grandpas. It is hard to attack someone like that without looking like the bad guy. Clinton might have read a bit, for example, about Joseph McCarthy's battles with U.S. Army counsel Joseph Welch in 1954. Welch was a brilliant lawyer, but was also soft-spoken, had stooped shoulders and thinning hair, and often wore a cardigan and bow tie. When McCarthy tore into Welch, the Wisconsin Senator looked like a bully. When Welch responded by sighing and lamenting McCarthy's "cruelty" and "recklessness," it was absolutely devastating. In fact, it was effectively the end of the line for Tailgunner Joe.

In any case, Hillary Clinton tends to learn and adapt very quickly, and she has apparently realized that attacking Sanders head on is a losing proposition. Her new tack is to represent her "esteemed opponent" as someone who "cares" and is "well-intentioned," but is not realistic. "I'm not interested in ideas that sound good on paper, but will never make it in the real world," she explained at an event on Thursday. This is certainly a better way to go, though it is fair to wonder if her best choice might not be to just leave Sanders alone, and wait until the chips fall on Clinton-friendly Super Tuesday. (Z)

Democrats Want A Debate Between Iowa and New Hampshire