•  Trump Says that His Tax Returns Are "None of Your Business"
•  Nine House Committee Chairs Endorse Trump
•  Democrats May Have a Messy Contested Convention
•  The GOP Convention Could Still Be Messy, Too
•  Democrats Hold a Registration Edge in Key Swing States
•  Sanders Won in the North and Clinton Won in the South
•  Sanders in Some Hot Water with the FEC
•  "Third Party" Republican Candidate Not Going to Happen


Trump Says that His Tax Returns Are "None of Your Business"

The saga of Donald Trump's tax returns continues and will linger until the election (unless he changes course and decides to release them). Trump's excuse for not releasing any of them is that the last three years are being audited. The IRS has said that there is no law or regulation preventing people from publishing their tax returns at any time, including when they are under audit. For 40 years, candidates of both parties have released their tax returns. Hillary Clinton has released all of hers going back to 1977.

It has now just come out that in 2000, Donald Trump released some of his tax returns in return for a casino deal, even though he was under audit then as well.

Timothy O'Brien, whom Trump sued for libel a decade ago, saw Trump's tax returns. He is under court order not to reveal their contents, but he nevertheless lists some areas where Trump might not be so comfortable if they were released:

Meanwhile, TPM's Josh Marshall wonders if there isn't an even more troublesome secret hiding within the returns: Maybe Trump isn't a billionaire at all. It's not a secret that much of The Donald's supposed net worth is based on the value of the Trump brand, as estimated by Trump himself. It's well within the realm of possibility that his actual assets, once his liabilities are taken into account, check in at something less than $1 billion.

In any event, assuming Trump holds steady and does not release any tax returns, the Democrats are going to constantly bring up the story of "What's he hiding?" (V & Z)

The chairs of 9 of the 20 standing House committees hopped on the Trump express yesterday and endorsed The Donald. These were Representatives Steve Chabot (R-OH), Michael Conaway (R-TX), Jeb Hensarling (R-TX), Candice Miller (R-MI), Jeff Miller (R-FL), Tom Price (R-GA), Pete Sessions (R-TX), Bill Shuster (R-PA), and Lamar Smith (R-TX). Their joint statement said: "We stand on the precipice of one of the most important elections of our lifetimes," adding "it is paramount that we coalesce around the Republican nominee, Mr. Donald Trump." It is nice that the representatives note that this is one of the most important elections of our lifetime, but it would be refreshing to at least once hear someone say: "This election is not terribly important. I'd rate it in the all-time bottom 20% in importance." Never seems to happen. Instead, every election is one of the most important ever. (V)

Democrats May Have a Messy Contested Convention

For most of the year, everyone thought the Republicans could have a contested convention but the Democrats would have smooth sailing. Now the reverse appears to be true. Donald Trump is going to waltz to the nomination but it's the Democrats who will have a big fight. The fight won't be about the nominee, that is already clear, but it will be about the platform and everything else. In fact, it has already started.

Sen. Bernie Sanders' (I-VT) people are seething about the choices the DNC made for membership in the three 25-member committees: rules, credentials, and platform. Sanders submitted a list of 45 possible members but only three were chosen. He is arguing that the membership in the committees should be in proportion to the primary results. DNC Chairwoman Debbie Wasserman Schultz countered with the observation that Sanders has known (or should have known) the rules all along and now is the time for all Democrats to unite behind the nominee. (V)

The GOP Convention Could Still Be Messy, Too

The New York Times' Jeremy W. Peters says that are still many ways that the Republican Convention in Cleveland could turn ugly. His list:

Meanwhile, there will also be delegates in Cleveland who are already thinking ahead to 2020. According to Politico's Kyle Cheney, there is substantial support for a motion to make all Republican primaries closed. The goal, of course, would be to make sure a "real" Republican gets the nomination in 2020. This would be an implied poke in Donald Trump's eye, while also giving a boost to Cruz's future White House hopes. So, it will still be worth it to stock up on popcorn before Speaker Paul Ryan (R-WI) gavels the convention to order on July 18. (Z)

Both parties are gearing up for big registration drives. So far, Republicans are doing a better job, with 614,000 new registrants since 2012 in the seven swing states that have partisan registration vs. only 289,000 for the Democrats. However, voter registration is precisely one of the areas where "big data," which Donald Trump has rejected as unimportant, matters. The DNC has a database that can pinpoint city blocks in Democratic-leaning areas where there are a relatively large number of unregistered potential voters and then send people there to register them. If Trump doesn't do the same thing, the Democrats could easily catch up in registrations and surpass the Republicans. (V)

Chris Weigant has posted a map of every county that has had a Democratic primary or caucus so far. Here it is, with Sanders' counties in green and Clinton's in yellow: 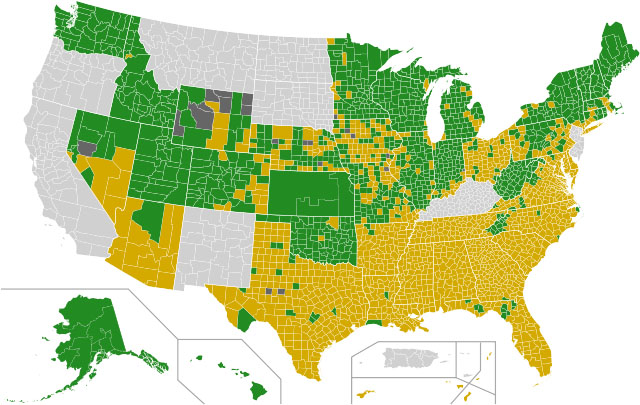 The map (from Wikipedia) is striking. Basically, Sanders won almost everywhere in the North and Clinton won almost everywhere in the South. The only major exception is Ohio, which Clinton won easily. Weigant speculates that if Sanders had managed to leverage his victory in Michigan into an Ohio win, he could have gotten real momentum and perhaps captured the nomination.

Sanders in Some Hot Water with the FEC

As we all know, Bernie Sanders has attracted a record number of donors to his campaign. He did not spend very much of that money on record keeping, however, as the FEC has come calling, asking some uncomfortable questions about whether or not his donations were all legal. The specific issues are that some donors may have gone above the legally-prescribed limit ($2700) and others may be foreign nationals who are forbidden from giving money to political campaigns.

These kinds of violations are not uncommon, particularly with candidates who draw a large amount of grassroots support. Ted Cruz and Ben Carson have also been singled out during this cycle, so too was Barack Obama in 2008. However, no candidate has ever breached the rules so seriously; the FEC's preliminary report runs more than 600 pages and lists more than 1,500 questionable donors. While Sanders may not have broken the rules deliberately, his team also did not work very hard to avoid breaking them—his website contains no warning about the $2700 limit, for example. The penalties won't be serious—the campaign will just have to give back any money it was not allowed to collect. However, it is not a good look for the Vermont Senator, given his emphasis on being the most ethical and conscientious candidate. (Z)

There was much talk of a "true Republican" running as a third-party candidate, so as to provide an acceptable option for people like conservative pundit Erick Erickson (who was, perhaps, the loudest advocate of the plan). Now, it is clear that the chances of that happening are slim.

The obstacles to the scheme are numerous. No candidate wants to run, apparently, with Mitt Romney and Sen. Ben Sasse (R-NE) already taking a pass. Nobody wants to pony up the money to fund the effort. Texas' deadline for getting on the ballot has already passed, and North Carolina's and Illinois' deadlines will soon be upon us. And the Trump-Ryan truce this week has quieted the talk of open rebellion among the rank and file.

This does not necessarily mean that the GOP is falling in line behind Trump, of course. At least, not the GOP elite. In fact, Slate has created a conservative pundit tracker to document how the commentariat's winds are blowing. At the moment, only three of the 25 people being tracked have committed to voting for Trump. Two others are voting for Hillary Clinton, one is not voting at all, nine are voting for "not Trump," and 10 have not decided. It all adds up to good news for presumptive Libertarian candidate Gary Johnson. (Z)

---The Votemaster
May13 Trump Meets with Ryan, Other GOP Leaders in Washington
May13 Trump Would Consider Cutting Social Security
May13 Trump's Tariffs Would Be Catastrophic for the Poor
May13 Kochs Make Their First Big Move of 2016
May13 Final Democratic Debate Looking Unlikely
May13 Another Win for Bernie Sanders
May13 Biden Already Had His Running Mate Picked Out
May13 Obama Wants Election Day to Be a Holiday
May13 Beware of Professors Bearing Prediction Models
May12 Trump Won't Release Tax Returns Before the Election
May12 Trump Rejects the Use of Big Data
May12 Ryan Is Caught in a Trap
May12 Gingrich Reportedly Favorite in GOP Veep Sweepstakes
May12 Time Looks to Be Growing Short for Sanders
May12 Florida Senate Race Turns Ugly
May12 Cruz Will Run For Re-Election in 2018
May12 Liberal Democrats Becoming Less Friendly to Israel
May12 The Decline and Fall of the Evangelicals?
May11 West Virginia and Nebraska Vote; Nothing Has Changed
May11 Clinton Moves Towards Sanders on Health Care
May11 Cruz Declines to Support Trump
May11 Armageddon May Be Upon Us
May11 Maybe the Republicans Need a Better Voting System
May11 Democrats Are Using Trump to Hurt Republicans with Latino Voters
May11 Biden Says He Expects Clinton to Become President
May11 App May Help Some Democrats Survive a Trump Victory
May10 West Virginia Votes Today
May10 Rubio Doesn't Want To Be Trump's Veep
May10 It's Trump Versus Warren
May10 Trump Fatigue Setting In
May10 Time's Running Out for a Third-Party Alternative to Trump
May10 Cruz Not Going Away Yet
May10 Facebook Raises Conservative Ire
May10 Get Ready For a Lot of Endorsements Like These
May09 Suppose Sanders Got What He Is Asking for
May09 Trump Is Now Starting to Win Delegates
May09 Trump Now Wants to Tax the Rich
May09 Palin Is Going to Try to Cantor Ryan
May09 Trump May Try to Stop Ryan from Serving as Convention Chair
May09 Hillary Clinton Is Actually a Progressive Democrat
May09 The Fight Is on for Married Women
May09 Obama Is Chomping at the Bit
May09 Nevada May Be Demoted in 2020
May08 Republican Party Rejects Trump's Unity Appeals
May08 Trump Is Previewing His General Election Strategy
May08 Trump Quite Unpopular with Foreign Leaders
May08 Media Hosts Never Challenge Trump When He Lies
May08 How Did the Media Miss So Badly on Trump?
May08 Clinton and Trump Tied in Georgia
May08 Clinton Wins Guam