Are you unhappy with the election results?

If you are thinking of leaving the country, and happen to be a college senior majoring in computer science who is interested in doing an English-language masters at one of the top universities in Europe (in beautiful and exciting Amsterdam), then click here.

The final results are in in 45 states, with Donald Trump winning 276 electoral votes and Hillary Clinton winning 218. Here is the map from Politico: 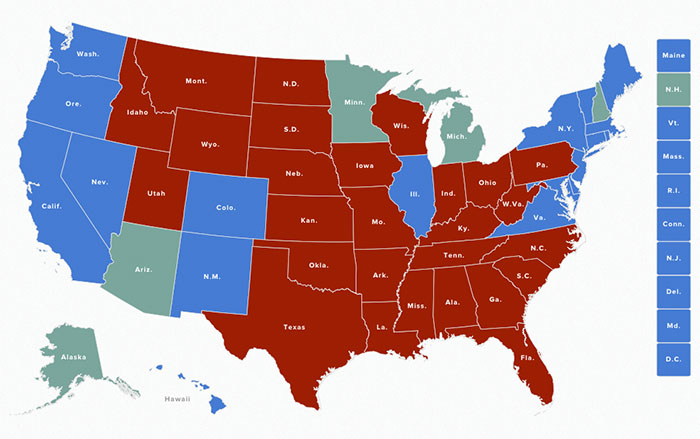 Of the five states still not called, Trump seems very likely to win Alaska, Arizona, and Michigan. Clinton is likely to win Minnesota. This would bring Trump to 306 and Clinton to 228. Currently, Trump leads in New Hampshire by 307 votes, but 7% of the precincts have not reported yet, so that could change. Trump appears to have won Maine's northern congressional district, ME-02. (V)

While Donald Trump has a clear majority in the Electoral College, as of 10:10 am EST, the popular vote is still very close. Clinton has 59,299,381 and Trump has 59,135,740, giving Clinton a popular vote lead of 163,641. The final tallies are not in yet, so that could yet change, but if Clinton ends up winning the popular vote, Democrats could use Trump's loss to try to delegitimize him. They are going to be yelling: "The system is rigged" for 4 years. Also noteworthy is that the major party candidates got a mere 118 million votes, unless a lot more come in. This is less than the 125 million in 2012. Some votes are yet uncounted in California and Washington state. This is the second time in 16 years that the popular-vote winner might lose the election. (V)

Donald Trump's win brings up a whole bunch of questions going forward, Some of the more interesting ones are these:

We are definitely in uncharted territory. Not only is Trump completely inexperienced in governing, but he is not someone who likes to play second fiddle to anyone. A possible, but unlikely, scenario is that vice president-elect Mike Pence, Speaker Paul Ryan (R-WI), and Senate Majority Leader Mitch McConnell (R-KY) get together every Monday morning to plan how to run the government that week, while Trump goes off to hold big rallies. The only recent precedents are President Eisenhower, who put the country on autopilot while he went out golfing, and President Reagan, who had lots of government experience but little interest in the details of running the country. But Trump isn't really like either of these. (V)

How Did This Happen?

In the coming days there is going to be a lot of 20-20 hindsight about how the greatest upset in American history happened. We will cover it. Here are some initial thoughts.

When the exit poll data starts to come in, we'll have a better idea what really happened. To some extent, Trump's wins in Michigan, Wisconsin, Ohio, and Iowa are all part of the "revenge of the angry, white blue-collar man" story. North Carolina and Florida don't fit that pattern. We'll have to wait to see what happened there. (V)

One silver lining for the Democrats is that it makes life somewhat easier in 2018, when half a dozen Democrats in red states are up for reelection in the Senate. Traditionally, the party in the White House loses seats in the midterms, and now that will be the Republican Party. Also, with complete control of all branches of government, the Republicans are going to have to deliver. That won't be so easy. The stock market is already looking grim. Suppose we have a Trump recession? Trump isn't going to be able to bring back millions of factory jobs. What happens when his supporters discover that it's not going to happen and they were suckered? What happens when he discovers that Congress is in no mood to finance a $20 billion wall and Mexico really is not going to pay for it? He could ban all Muslims from entering the country, but suppose he does and all the Arab countries say: "You want to fight ISIS? Go ahead. We're not going to help." Trump could appoint a very young, very conservative judge to the Supreme Court, but most of his other promises aren't really doable and his followers are bound to be disappointed when they belatedly discover this. (V)

Hillary Clinton has called Donald Trump and conceded. Donald Trump will be the 45th President of the United States.

We are going to take a break for a while and be back with more later in the day.

CNN projects that Trump will win Wisconsin.It has him at 257 electoral votes now. If he wins either Michigan or Pennsylvania, it's all over, and he is leading in both.

Barring a miracle (or something close, at least), Donald Trump will be the next President of the United States. This is, almost certainly, the most stunning result in American political history. There's Dewey and Truman, of course, but at least Truman was an experienced politician and a sitting president. Trump will be the first POTUS with neither military nor public service on his resume.

Over the next several days, we'll cover some of the fallout from this earth-shattering development. For now, a few immediate questions, lessons, etc.:

This is just a first draft; many more good questions and observations will be raised in the next few days, once some of the dust has settled. (Z)

John Podesta just spoke and said there would be no announcements tonight.

Marijuana will be legalized in Nevada.

Trump is preparing his victory speech.
CNN has called Utah for Donald Trump.

Catherine Cortez Masto has won Sen. Harry Reid's (D-NV) seat. There aren't going to be too many other Democratic pickups.

Clinton leads in NH by 18 votes

We've had 1.2 million visits to the site today and the server is having some problems. Not sure how long we can keep going.

Trump is ahead nationally by 1 million votes.

Dow futures are down 5%, the largest amount since the day the market opened after Sept. 11

A quick rundown on the key Senate races: The Democrats have picked up Illinois. It's too early to call Pennsylvania, Nevada, New Hampshire, and Missouri. The Republicans are likely to hold Wisconsin. The Republicans have definitely held Indiana, North Carolina, and Florida. The upshot: The GOP is going to hold the Senate.

Fox News has called Wisconsin for Donald Trump. Meanwhile, everyone is now talking about possible 269-269 scenarios. In that case, the election would go to the House, with one state getting each vote. More Republican delegations than Democratic delegations, and presumably they would prefer a RINO to a Clinton.

Everyone was expecting bloodletting within the Republican Party. Now the bloodletting is going to be in the Democratic Party, with the Sanders/Warren wing blaming the establishment for the poor showing, even if Clinton pulls it off.

CNN projects that Clinton will win OR.

Dow futures are down 700

CNN calls CA HI for Clinton and ID for Trump

CNN has called Ohio for Trump

The markets are taking a big hit. Dow futures down 500 points; Mexican peso way down.

The results so far, with Donald Trump up in almost every competitive state, are nothing short of stunning. This is bringing to mind the polling disasters with the Brexit, Israeli elections, UK elections, etc. If this holds, every pollster in the business will be out of business. Meanwhile, whether Trump wins or not, this is not going to be the repudiation of Trumpism that the GOP elite was hoping for.

Note that the data gets entered as it comes in. Sometimes only a few percent of the precincts are reporting. You can mouse over the map to see that.

We had some problems. They seem to be fixed now

We are just getting revved up now. Trump won KY and IN and WV. Clinton won VT

Oops. We hate to begin with an apology, but we need to. This morning we entered a YouGov poll that showed Trump ahead in Florida. That was actually a Georgia poll. As a result, the map showed Florida as a tie. When the poll was changed to Georgia, Clinton now leads in Florida and has 317 electoral votes. In the text, we said we didn't believe Florida was going to be a tie and fixing the incorrect data confirmed our intuition. We are so sorry for the error.