Can the Democrats Become a National Party Again?

Democrats are an endangered species in much of the country. Here is a map showing the House districts as of Jan. 2017. 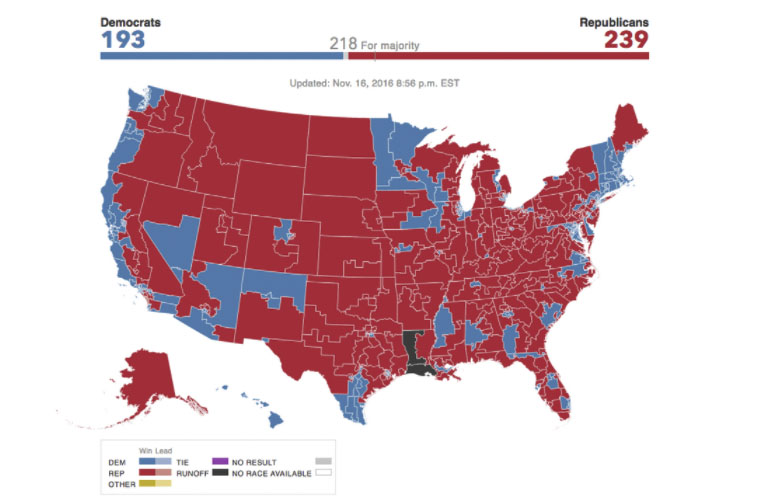 The map is pretty red. Many states have no Democrats in their congressional delegation. The Democrats do have 193 seats in the new House, but they are very concentrated, with 66 of them from just three states: California, New York, and Massachusetts. Referring to white working-class people, the chairman of the Missouri Democratic Party summarized the problem thusly: "There are people who are currently thinking that Democrats don't care about them. We've got to make sure they know we do." At a press conference. House Minority Leader Nancy Pelosi seemed to agree that Democrats had ignored white working-class voters, once the bedrock of the party.

Another problem the Democrats must grapple with if they are ever to take control of the House is that their voters stay home by the tens of millions in the midterm elections while Republicans don't. This allows the Republicans to capture the state legislatures, which draw the congressional maps. For example, in 2010, Pennsylvania had 19 congressional seats and Democrats had a 12-7 majority in the delegation. The state lost one seat as a result of the 2010 census, but Republicans took control of the state machinery and redrew the map. Now they will have a 12-6 majority. Of course, the next census will follow the 2020 election, which is not a midterm, so maybe the Democratic phoenix will rise from the ashes more quickly than we might imagine. (V)

The New York Times has an article on why Hillary Clinton lost Wisconsin, a state she was so confident of winning that she didn't even bother to set foot there. Turnout in the state was the lowest in 16 years. Of Milwaukee's 15 council districts, turnout in the five poorest ones was dramatically down, accounting for half of the overall decline. These are people who nearly always vote Democratic, and this year they didn't vote in the usual numbers. Part of the reason is that after Barack Obama was elected president, they expected their lives would improve, and they didn't. They probably don't know or care that almost everything Obama wanted to do was blocked by the Republicans in Congress.

Another reason turnout was down is Wisconsin's new voter ID law, which went into effect for the first time this year. How much of an effect that had is hard to determine, but Trump's victory in Wisconsin was only 1% (27,000 votes), so if the law prevented even 2% of the Democrats from voting, that could have made the difference.

Some of the people interviewed in the poorer areas of Milwaukee said that they admired him because he was rich and spoke his mind. Others said that other countries wouldn't have respected the U.S. if it were being run by a woman. The reporter didn't ask them if they respected Germany and the U.K., both of which are being run by women. (V)

Trump Lays Out Day One Plan

President-elect Donald Trump posted a video on Monday in which he laid out his six-part plan for his first day in office:

It is interesting how much Trump has said here, while at the same time saying so little. Killing the TPP is fairly concrete, of course, though Trump's GOP comrades in Congress may not be happy about it. Numbers 2 and 3 are just talk until we find out some specifics, while number 4 is surely the most meaningless item on the list; does he think the people in the DoD have just been sitting around playing solitaire, waiting for someone—anyone!—to tell them to get to work protecting the U.S.? Number 5 is also pretty vague, and Trump may find himself disappointed with the percentage of jobs being done by immigrants because (a) there aren't enough qualified Americans, or (b) there aren't enough interested Americans. And as to number 6, we've already pointed out that it's easy to get around lobbying bans by assuming the title of "adviser" or "special counsel" or maybe "King of the Britons." Meanwhile, among the "Day One" pledges from the campaign trail that are missing from the list: the wall, and repealing Obamacare. Maybe he's saving those for the second day. (Z)

During the campaign, Donald Trump was unequivocal when it came to his plans for the most sacred of entitlement sacred cows: "I'm not going to cut Social Security like every other Republican and I am not going to cut Medicare or Medicaid." Now, it appears that Trump is seeing the light—at least, the one that emanates from Speaker Paul Ryan (R-WI). Ryan would like to replace Medicare with vouchers and block grants to states, with an eye to shrinking (and likely eliminating) the program in the long term. Sometime this weekend, Trump's transition website was updated to include Trump's belief that we need to "Modernize Medicare" (English translation: vouchers) and "Maximize flexibility for States in administering Medicaid" (English translation: block grants).

The liberal economist Paul Krugman, who is about as anti-Trump as they come, has written a blistering editorial about The Donald's change in gears. He argues that (1) it will be "one of the most blatant violations of a campaign promise in history," (2) the change will weigh most heavily on the white, working-class voters whom Trump claims to champion, and (3) it's bad policy, eliminating a remarkably efficient and effective government program largely because it undermines the Republican argument that more government does not solve problems. Assuming Krugman is on target—and his first two points, in particular, are hard to argue with—one wonders what Trump and Ryan are thinking. That voters won't notice the changes, which will ultimately mean less health care for more money? Or that they just won't care? (Z)

If only Prince Luitpold of Bavaria had been more merciful, the recent election would have been quite different. Donald Trump's grandfather, Friedrich Trump, left southern Germany at 16 for America without bothering to perform the required military service. The local government saw him as a draft dodger and stripped him of his citizenship. Once in America, he made his way to the Northwest and then on to Canada's Yukon territory, where he set up a restaurant-annex brothel. It was a big hit with the miners, and he made a fortune.

He traveled back to Germany several times, where he met his wife. She didn't like life in the New World and wanted to return to Germany. Friedrich tried to do that, but the local government regarded him as an illegal immigrant and tried to deport him. He wrote a recently discovered letter to the presiding monarch, Prince Luitpold, beseeching him to let bygones be bygones and let him stay in Germany. The Prince was having none of it, and Friedrich was deported back to America. Our researchers are still looking into reports that Luitpold threatened to build a 20-foot wall along the German border if Friedrich dared show his face again. (V)

Rep. Tulsi Gabbard (D-HI), the only Samoan American in Congress and a strong supporter of Sen. Bernie Sanders (I-VT) during the primaries, met with Donald Trump yesterday. The two discussed Syria during the meeting. Gabbard opposes a no-fly zone in Syria. Why Trump would want to discuss Syria with Gabbard is not clear, since she is not an expert on foreign policy in general or Syria in particular.

After the meeting, Gabbard said: "I will continue to seek common ground to deliver results that best serve all Americans, as I have tried to do during my time in Congress." There has been some speculation that Trump might tap Gabbard to be ambassador to the United Nations. (V)

Howard Dean, in the running to reclaim his former job as chair of the DNC, was interviewed on Canada's CTV on Monday. When asked about newly-minted Trump strategic adviser Steve Bannon, he minced no words, characterizing the darling of the alt-right as a "nazi." He further explained that, "It's a big word and I don't usually use it unless somebody's really anti-Semitic, really misogynistic, really anti-Black."

In his time, Dean has certainly been known to put his foot in his mouth (see scream, Dean). However, if we assume that this was the carefully thought-out declaration of a veteran politician, then it was surely meant to communicate that the good doctor has not grown old and calcified in the last decade or so, and that he can still be a rabble-rouser in the mold of a Bernie Sanders. The Democrats had better hope, however, that this is just a campaign gambit, and that Dean's plan for the next four years (if chosen as DNC chair) is not to simply lob grenades at the White House. Attacking Trump didn't work for Hillary Clinton, and it's not likely to work for the next nominee of the party, either. (Z)