Sessions Recuses Himself from Investigating Sessions

Bowing to pressure from Republicans and Democrats alike, Attorney General Jeff Sessions recused himself from overseeing any Justice Dept. investigations into Russian involvement with the 2016 elections. He also said he will file a "supplement" to his testimony before Congress.

Presumably, Sessions thinks this will close the matter. However, we are still left with all manner of uncomfortable questions that are unanswered. Among them:

Actually, we already have a (partial?) answer to the last question. There's Flynn, of course, and Sessions, and one-time campaign manager Paul Manafort. Now, added to the list, is son-in-law Jared Kushner. In December—that is, after the election, but before the inauguration—there was a Trump Tower meeting between Flynn, Kushner, and Russian ambassador Sergey Kislyak. Trump advisers Carter Page and J. D. Gordon have also come forth and admitted meeting with the Ambassador at various times.

Meanwhile, Donald Trump—denied a victory lap after his address to Congress—began to circle the wagons on Thursday. An hour before Sessions recused himself, Trump said there was absolutely no need for him to do so, another case of a White House where everyone does not seem to be on the same page. The President also insisted that the Attorney General is "an honest man" and the oversight was "not intentional." He then pointed the finger at Democrats, declaring that, "They lost the election and now, they have lost their grip on reality. The real story is all of the illegal leaks of classified and other information. It is a total witch hunt!"

Witch hunt or no, Democrats are not happy about all of this, and many are not satisfied with a mere recusal—they want Sessions' resignation. They are not likely to get it, although, as a practical matter, the Trump administration needs to think long and hard about how they want to approach this whole mess. If the Justice Dept. takes the lead in investigating, then overseeing things would be deputy attorney general Rod J. Rosenstein. He hasn't even been confirmed yet; even if he is, there would be enormous conflicts of interest in him investigating his own boss (Sessions), not to mention his other boss (Trump). If the administration tries to make this go away with half-measures, rhetoric, and partisan reports masquerading as impartial investigations, it is going to linger for the next four years. Richard Nixon was eventually forced to accept this during the Watergate scandal, and so bowed to pressure and appointed an independent prosecutor. Of course, the problem was that Nixon was guilty, which the prosecutor was able to discern (aided by the media, plus a government that leaked like a sieve). If Team Trump is just as guilty, well, they've already got the hostile media and the leaky government. In that case, then they may have no good options. (Z)

Between Jeff Sessions' fudging the truth before Congress, and Donald Trump's embrace of Wall Street, and the entire Trump family's willingness to peddle access, "Do as I say, not as I do" is quickly becoming a theme of this administration. The latest news on this front comes courtesy of the Indianapolis Star, which reports that while Vice President Mike Pence was governor of Indiana, he regularly used a private e-mail account to conduct official business (an AOL account, no less, befitting someone his age). The e-mails that passed through the account touched on all matter of subjects, from the security gates at the governor's mansion to terror attacks around the globe. At least some of the messages contained potentially classified information, such as the one that contained a list of terrorism suspects arrested by the FBI.

Of course, this is exactly what Republicans—from Donald Trump on down—savaged Hillary Clinton for doing during the campaign. In Pence's defense, he was merely a state governor as opposed to secretary of state. On the other hand, there is no evidence that Clinton's e-mail was actually compromised, whereas Pence's account was definitely hacked last summer. Further, any security expert in the country would agree that an account on a private, unknown mail server is much more secure than an account on a public behemoth like AOL, which has a huge hacker target on its back at all times. Ergo, one can argue quite compellingly that Pence made a more careless choice than Clinton did. In any event, Pence and Jeff Sessions now face a very similar question: How was your behavior substantively different than the behavior you once persecuted a Clinton for? (Z)

The Fight for Trump's Brain

The people closest to Donald Trump are fighting over his brain. As Axios puts it: "On one side is Darth Vader Steve Bannon and on the other is Trump's Manhattanite daughter Ivanka." Bannon wants Trump to scorch the earth and destroy the system, no matter what the cost. Ivanka is much gentler and more liberal. Trump could get a terrible headache from these two fighting over his brain.

On the other hand, there is a chance he might be able to survive the battle and keep on good terms with both of them, because their interests are very different. Bannon is a nationalist who believes deeply in the nation state and its duty to look after its people. In this light, Ivanka's family leave plan isn't a problem. However, he doesn't care much about LGBT rights one way or the other, so he can just let her argue her case without any blowback. He does care a lot about national security, trade, and immigration, but those aren't her issues. As long as his issues don't overlap her issues, Bannon might continue to get along well enough with Ivanka to keep peace in the tent. Bannon is the one who has to be careful though, because if push comes to shove and Trump has to fire one of them, it's not going to be his beloved daughter. (V)

Supreme Court Weighs In on Gerrymandering

In a partial win for the Democrats, yesterday the Supreme Court clarified its position on what constitutes a racial gerrymander, which it has long held to be unconstitutional. In the past, the court has held that a district that is not compact and has jagged edges and also has a racial imbalance compared to the surrounding areas is clearly gerrymandered and impermissible. An example of a district that would probably not pass muster is PA-07, shown in dark green below. It has been described as Donald Duck kicking Goofy: 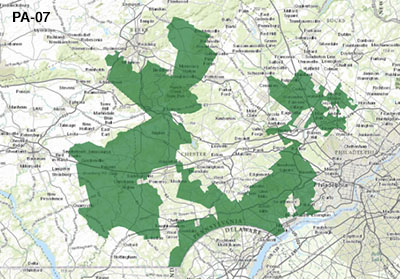 What the court had never spoken about before yesterday is: "Can a nice, compact district with smooth edges also constitute a racial gerrymander?" In yesterday's decision, written by Justice Anthony Kennedy, the answer was, "Yes, it can." In other words, having a smooth boundary around a compact district is not a valid defense against a charge of gerrymandering. In the specific case at hand, in Virginia, the High Court sent the question back to the district court for a rerun, using the new rule (i.e., disallowing "it has smooth boundaries" as a defense). Since Virginia holds elections this November, the courts and legislature will have to move fast to rectify the situation. (V)

During Donald Trump's address to a joint session of Congress on Tuesday, he praised the Navy SEAL William "Ryan" Owens, who died during the raid on Yemen last month. The President said that it generated a large amount of intelligence, so Owens didn't die for nothing. Except maybe he did. Ten senior officials have briefed NBC News that the mission provided no valuable intelligence, in direct contradiction to what Trump said.

Even before this news came out, the raid was heavily criticized. Trump called the raid a success, but Sen. John McCain (R-AZ) said: "When you lose a $75 million airplane and, more importantly, an American life is lost and wounded, I don't believe you can call it a success." Owens' father has questioned the rationale for Trump's order to carry out the raid and asked for an investigation. (V)

Donald Trump has said that between 3 and 5 million people voted illegally in the U.S. presidential election, and if it weren't for them, he would have won the popular vote. Now an actual piece of data about how many people voted illegally has been produced. Ohio Secretary of State Jon Husted compared the Bureau of Motor Vehicles database (which includes citizenship information) with the list of people who voted. He found that 82 people voted illegally. This is 0.0015% of the 5.6 million votes cast in Ohio in 2016. If this percentage is applied to the 135 million votes cast in the election, we can estimate that 1,980 illegal votes were cast nationwide. This is three orders of magnitude less that what Trump claimed. (V)

McMaster Was Rebuked by the Army in 2015

The new national security adviser, Lt. Gen Herbert McMaster, was admonished by the Army two years ago for mishandling a sexual assault case. He violated Army regulations when he permitted two lieutenants to attend the Army's elite Ranger School. When soldiers are under a criminal investigation, they are not permitted to attend the school. McMaster was given a "memorandum of concern" from Gen. Daniel Allyn, the Army's vice chief of staff, because he was aware of the investigation and ignored the rules.

This case is just another in a long list of what happens when an incoming president fails to thoroughly vet his appointees. Trump's first pick for national security adviser, Michael Flynn, was fired after he was found to have had contact with the Russians and then lied about it. Trump's pick for labor secretary, Andrew Puzder, had a substantial number of skeletons in his closet, most of which would have come to light had Trump's team looked closely at him. (V)