President Donald Trump's personal intervention in getting House conservatives to drop their opposition to the AHCA bill means he owns it now, for better or worse. If it passes Congress and he signs it, he can (and will) rightly take much of the credit for getting it passed. However, to voters who lose their healthcare as a result, he is one who will get the blame. And that group includes a fair number of people who voted for him.

After making a few changes to the healthcare bill that will reduce the number of people who will qualify for Medicaid (and also reduce the amount of medical care each one will get), the Republicans have decided to hold a vote on the bill Thursday, without waiting for the CBO to score the new bill. It's not hard to understand why they are in such a hurry. The Medicaid changes are going to increase the number of people who will lose their insurance. If the Republicans thought that "24 Million will lose insurance" was a bad headline, "30 Million will lose insurance" doesn't sound any better.

The tweaks to the bill make it more palatable to the House Freedom Caucus but less palatable to House moderates, whose votes are also needed. If Trump works the phones until Thursday, as he has promised, he could try to buy off the moderates one by one with minor tweaks here and there. If a member of Congress thinks that a tax credit of $4,000 isn't enough for a senior, Trump could offer $4,500, but maybe only for a narrower group of people. If the whip counts are accurate, Trump will give up as little ground as possible and we may see the bill pass with exactly the 216 votes needed (due to House vacancies, 216 is enough). (V)

Muslim Ban Will Have Unintended Consequences

Here's a story that brings together two of the current priorities of the Trump Administration, and not in a good way. As the New York Times' Miriam Jordan reports, rural America is coping with a severe shortage of physicians. For most American-born doctors, there is much more appeal in staying in the big town as a GP, or in becoming a specialist. Neither of those choices leads to a career practicing medicine in small-town America. As a workaround, many smaller towns and cities have taken to recruiting doctors from other countries, including those of the Middle East.

Now, those small towns are faced with a double-whammy. Doctors from many countries, even those not included in the list of six majority-Muslim countries, are having trouble getting visas, or else have to be nervous about committing to a career in the United States, where the rules could literally change at a moment's notice. Further, a possible reduction of government funding may deprive poorer, more rural states of the resources they need to attract these physicians in the first place. The Times story, for example, relates the tale of nine counties in Montana that do not count a single doctor among their residents. For nine months, the state's Benefis Health System has been investing time and money in recruiting a single doctor from Romania (hardly a hotbed of terrorist activity). That doctor has yet to set up shop, and now neither she nor Benefis is entirely confident that she ever will.

This story is a small part of a much bigger picture. During the campaign season, it is all good and well to make bugaboos of ObamaCare, or Muslim immigrants, or undocumented Mexicans, or Chinese currency manipulation, or the like. However, voters do not respond to abstractions nearly as much as they respond to impacts on their day-to-day quality of life. If, in four years, Trump is left with a legacy of, "He stopped the Muslims from coming, and slashed government spending, but your mother died for lack of medical care," that is going to be a net negative for him. And given that it's rural areas (aka Trump strongholds) that are going to be most affected by these policies, it will make his re-election bid that much tougher. (Z)

Russian Company that Paid Flynn Was Deemed "Unsuitable" by the Pentagon

Former national security adviser Michael Flynn received over $50,000 from various Russian sources in 2015 and 2016. One of the sources was a Russian air cargo carrier that is on the Pentagon's blacklist. It is not entirely clear what the carrier did to get into trouble with the Pentagon, but it was hit by U.S. sanctions, possibly for spreading missile technology.

An affiliate of the airline, Volga-Dnepr, paid Flynn $11,250 for one speech in August 2015. Flynn was a retired lieutenant general at the time so the speech and payment were legal, if a bit unusual. Four months later, Flynn was seated next to Vladimir Putin at a dinner for Russia Today, which paid Flynn $45,000 for a speech. When asked what is going here, an aide to the House Oversight Committee said: "Every day we are learning new information about General Flynn's ties to Russia, and we will continue to gather as much information as possible." It is probably safe to say that all we see now is the tip of the iceberg. (V)

In 2008, Donald Trump, Jr., said that money is pouring in from Russia. Thanks to some investgating from Reuters, we may now have a little better idea of what he may have meant. At least 63 people with Russian passports bought $98.4 million worth of property in seven Trump-branded buildings in South Florida alone. Many were politically connected businessmen, but some were one or two notches further down the totem pole. None appear to belong to Vladimir Putin's inner circle.

However this estimate may be far too conservative because fully one-third of the 2,044 units were purchased by limited liability companies, so the true buyer could not be determined. Most of the units cost over $1 million and some were purchased with cash. (V)

The Dept. of Homeland Security has put out a request for prototypes for a border wall with Mexico. The wall must be 30 feet high and aesthetically pleasing on the U.S. side. It is not required to be aesthetically pleasing on the Mexican side. However, proposals of walls only 18 feet high are also fine. The wall must be able to resist for an hour anyone trying to punch a hole in it using a sledge hammer, car jack, pickaxe, battery operated tools, or an oxyacetylene torch. The wall also has to be designed so no one can climb over it or tunnel under it. (V)

According to the Washington Post, the White House will soon announce that George Conway, the husband of Kellyanne Conway, will be named to run the Justice Department's Civil Rights division. The Civil Rights division employs 1,000 lawyers who defend federal policies in court. It also pursues corporations for wrongdoing. During the Obama administration, the division won tens of billions of dollars in penalties against major corporations. Whether Conway will pursue corporations remains to be seen.

Conway has actually already had his 15 minutes of fame. During the Clinton administration, a woman named Paula Jones sued Bill Clinton for sexually assaulting her. Her lawyer: George Conway. The case was settled out of court when Clinton agreed to pay Jones $850,000. (V)

Gorsuch Is Not a Slam Dunk

It is unclear, as yet, what the Democrats' plans are regarding Donald Trump's SCOTUS nominee, Neil Gorsuch. If they (and the two independents) withhold support as a bloc, however, then Gorsuch could only afford two GOP defections. And, as it turns out, there may be more than two GOP Senators that are reluctant to vote for him.

What is the problem? Well, on the surface, it is Gorsuch's religion. Though raised a Catholic, he now worships at St. John's Episcopal Church in Boulder, Colorado, which is a very liberal church. Specifically, they have somehow concluded that Jesus preached tolerance, and so St. John's does not approve of anti-Muslim rhetoric or homophobia. They also prefer peace over war, and celebrate the "dignity of every human being." Undoubtedly, the Lamb of God is rolling over in his grave due to these Christians who seem to have actually studied his ministry and have tried to understand the spirit in which he preached. In any case, Gorsuch's choice of congregation has some conservatives up in arms. For example, American Family Radio Network radio host Bryan Fischer has tried to rally his listeners to oppose the nominee, tweeting that, "Gorsuch attends a church that is rabidly pro-gay, pro-Muslim, pro-green, and anti-Trump."

The Founding Fathers would have been horrified by the notion of a religious test for SCOTUS justices, but that's the world we live in today. And the real issue is not Gorsuch's religion, per se, it's that his religious beliefs may be a hint that he's not a "true" conservative. Certainly, there have been a number of instances in the past half century or so where a Republican appointee became part of the "liberal" wing of the court: John Paul Stevens, Harry Blackmun, Earl Warren and—on some occasions—Anthony Kennedy and Sandra Day O'Connor. That may say something more about the merits of the cases being considered, rather than anything else, since there really hasn't been a case of a Democratic-appointed justice who turned out to be a closet conservative. By all indications, Gorsuch can be expected to rule from a center-right perspective, not too far removed from Chief Justice John Roberts. If Senate Republicans insist on someone who is more orthodox, they could open themselves up to a nasty fight with the President, while at the same time giving Democrats carte blanche to filibuster the replacement nominee. (Z)

Donald Trump squashed Hillary Clinton like a bug in West Virginia, 69% to 26%. The only state where his margin was bigger was Wyoming. That was then, this is now: 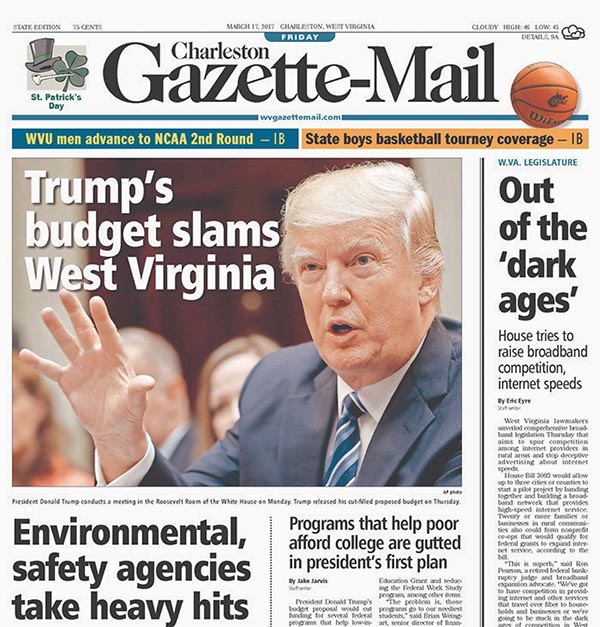 As we noted yesterday, much in Trump's budget hits poor rural voters very hard. West Virginia is a poor rural state and the Charleston Gazette-Mail, the largest newspaper in the state, noticed. The article cites many of the things the Appalachian Regional Commission has done for the state, including strengthening the infrastructure (transportation, broadband, water, and sewer projects), training people in entrepreneurship, building community health centers, and more. Trump's budget defunds the Commission and the paper is not pleased. What he sees as waste, it sees as vital services. This is a simple reminder of why it is so hard to change the federal budget: every single item that is in there is present because some senators and representatives want it in there. If other newspapers and media outlets in the heart of Trump country also start attacking him, at the very least it will put pressure on senators and representatives to fight him. (V)