•  Was 2017 the Craziest Year in Politics Ever?
•  Trump's New Targets: The USPS and Amazon
•  Trump Outlines Immigration Demands
•  Russia Snubs a Senator, Senators Snub Back
•  DHS Is Making States Wait 9 Months Before Helping to Secure Their Voting Systems
•  No, Trump's Approval Rating Has Not Equaled Obama's
•  Lessons from the Saturday Night Massacre


Was 2017 the Craziest Year in Politics Ever?

Imagine what future political historians are going to make of 2017. A president under investigation for allegedly helping a foreign adversary help him win the election, talk of impeachment, Twitter becoming the place where government policy is announced, and a wave of sexual misconduct in Congress that has taken down members from both chambers and both parties. Was this the worst year ever? Politico asked some of the nation's best historians for their take. Here are the highlights (the president or presidents in parentheses are the ones they are most known for studying):

Obviously, the Civil War years, the Vietnam War years, and the post-WWI transition to modernity were all popular choices. But it is Rakove who seems to have most nearly gotten what Politico was going for. There are many years where the president has been one player in a much broader drama that swept across America and/or the world. As Lincoln famously observed, "I claim not to have controlled events, but confess plainly that events have controlled me." Trump's craziness, by contrast, comes at a time when there is no obvious overarching national crisis and emanates almost entirely from him. In that way, he is surely sui generis. (V & Z)

As we have noted several times now, whenever Donald Trump is on vacation at Mar-a-Lago (which is a lot of the time), he has extra time for tweeting. It would seem that his standard bugaboos—Barack Obama, Crooked Hillary, Robert Mueller, kneeling NFL players, the fake news—are played out a bit, because from out of left field, he came up with this on Friday:

Why is the United States Post Office, which is losing many billions of dollars a year, while charging Amazon and others so little to deliver their packages, making Amazon richer and the Post Office dumber and poorer? Should be charging MUCH MORE!


Actually, this probably wasn't out of left field. There must have been a report on Fox, or NewsMax, or one of the other outlets Trump monitors about how Amazon is scamming the USPS.

In any case, this is yet another example of Trump (apparently) being ignorant of both business and civics. From the business end, Amazon actually has a greater ability to self-distribute than any other online retailer. So, a price change designed to hurt them would actually hurt their competitors more and would, in turn, lead to higher prices, less commerce, and fewer jobs. This would seem to be the opposite of the President's platform. Meanwhile, from a civics perspective, Trump doesn't seem to be aware that the USPS is a semi-public corporation regulated by the government. That includes the prices that it is allowed to charge. If those prices are to be increased, the USPS Board of Governors must make a recommendation to do so. Unfortunately, they cannot currently do that, because all nine of the appointed seats on the board are vacant. And they are vacant because nominations have not been forthcoming from...Donald Trump. (Z)

Donald Trump did not limit his Friday tweeting to the USPS. He also used the social media platform to lay out, apparently, his current position on immigration reform:

The Democrats have been told, and fully understand, that there can be no DACA without the desperately needed WALL at the Southern Border and an END to the horrible Chain Migration & ridiculous Lottery System of Immigration etc. We must protect our Country at all cost!


Trump seems to have forgotten at least four things:

Add it up, and Trump is overplaying his hand. There is much bipartisan support for a DACA fix, and there is very limited support for a wall. What will eventually happen is that Congress will reach a wall-free deal, and will send it to Trump. At that point, he will either have to contradict his past promises, or he will have to back down from Friday's declaration. Either way, he ends up with egg on his face (and, most likely, with an aggravated base). (Z)

Three senators—Jean Shaheen (D-NH), Ron Johnson (R-WI), and John Barasso (R-WY)—were planning to visit Russia. Now it's not going to happen, because Russia denied a visa to Shaheen. The Russians didn't provide a reason, but since Shaheen has been a consistent supporter of measures to fight Russia's hacking and trolling, and has fought for a ban on the Russian Kaspersky Lab software for all government computers because she believes it is spyware, one can make a pretty good guess what the Russian's issue with her might be. In solidarity, the two Republicans canceled their trips as well. The lawmakers were not planning to meet Vladimir Putin. In fact, they weren't even invited. They were planning to meet civil society groups, possibly some of which are not in Putin's good graces.

This is not the first time Russia has barred travel by members of Congress. In 2014, the U.S. imposed sanctions on Russia for invading Ukraine's Crimea Peninsula. In return, Russian banned then-Speaker John Bohner and then-Majority Leader Harry Reid. (V)

The Russians hacked at least 20 states prior to the 2016 election, mostly getting into the voter registration database rather than the actual voting machines. The goal of such hacking was undoubtedly to remove voters from heavily Democratic precincts, so as to prevent them from voting. Many states have realized this in retrospect, and have asked the Department of Homeland Security for help in securing their systems for the 2018 election. Such help is not forthcoming with any speed. More specifically, there is a 9-month waiting period before help arrives. Of course, that means any state asking for help now will get it just before the election, which will not leave any time to fix problems that are detected. Also, if it is detected that voters may have been deleted from the rolls, there will be no way to get them reregistered in time to vote.

Much of the problem rests with Congress, which has yet to pass any bill dealing with election security or appropriating funds for searching for and fixing problems. States and localities typically have no budget for cyber security, so they are dependent on DHS, which has some expertise and budget, but not nearly enough to do the job. What DHS has been offering in lieu of actual help is instructions for states and localities to do their own assessments. While that may help a little, it is clearly too little too late. (V)

No, Trump's Approval Rating Has Not Equaled Obama's

On Thursday, Donald Trump pulled a 46% approval rating in Rasmussen's daily tracking poll. Barack Obama pulled the same number in late December of his first year. This has caused some folks, including the fellow who occasionally resides at 1600 Pennsylvania Avenue, to claim that Trump has now equaled Obama in popularity. Theoretically, that shouldn't be much of an achievement, because the people who are making that claim regard Obama as a terrible president. Beyond that, however, it's not remotely true. PollsandVotes.com put together this graphic showing how Obama and Trump compared to each other in every major tracking poll during their first year in office. 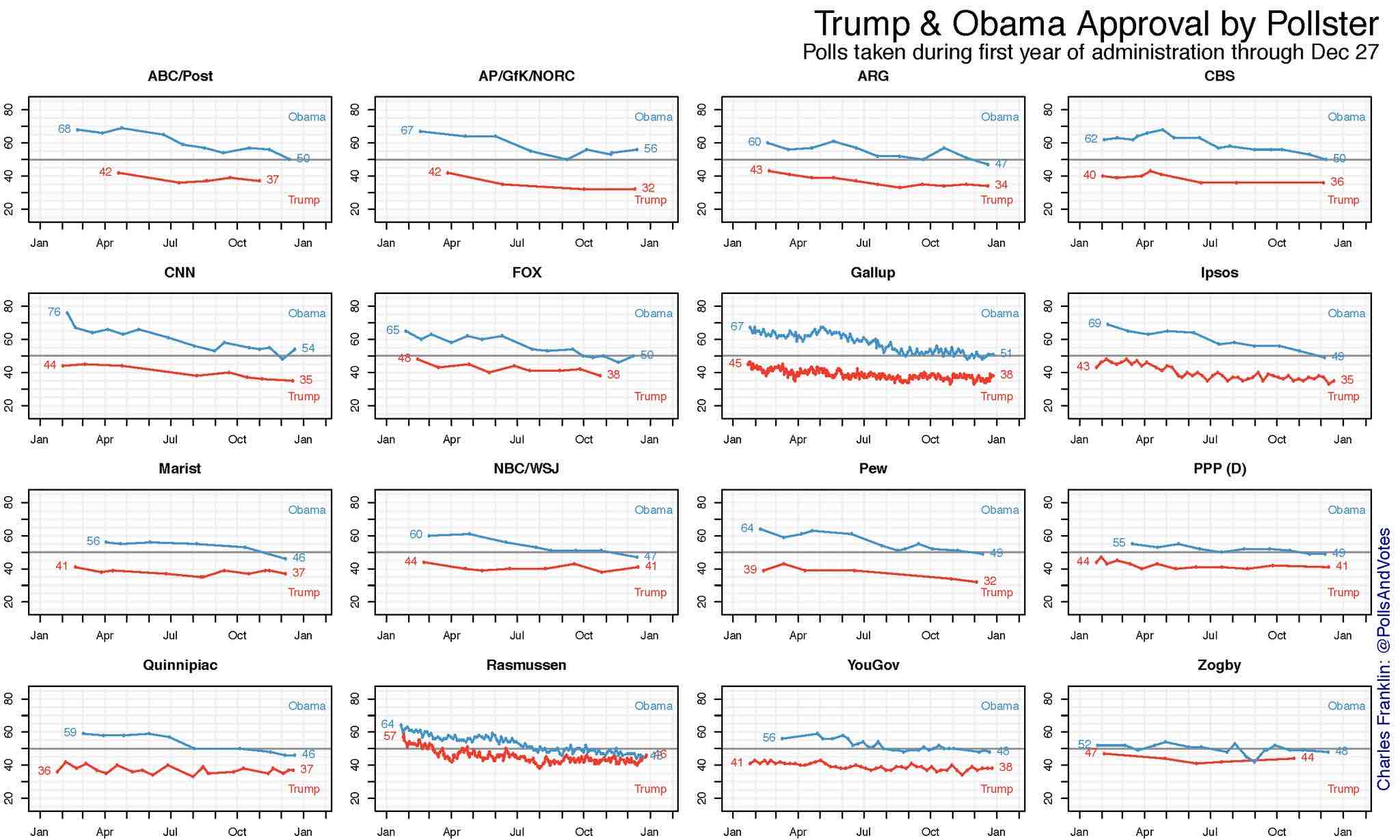 Of twelve different polls, only two are remotely close, and even those two favor Obama. Further the two close ones—Rasmussen and Zogby—both have pronounced Republican house effects. Zogby has also been called "the worst pollster in the world" by FiveThirtyEight, and has often been hired to conduct push polls. So, the case that Trump = Obama is as flimsy as Roy Moore's chances of being a U.S. Senator. (Z)

Lessons from the Saturday Night Massacre

The Saturday Night Massacre took place 44 years ago, before many of today's voters were born (or if they were born, before they were old enough to understand it as it unfolded). The popular version goes something like this: Nixon fired the special prosecutor who was looking into the Watergate break-in and bingo, the House Judiciary Committee instantly and unanimously voted to impeach Nixon. Unfortunately, the popular version is quite wrong. Walter Shapiro has a good historical piece on what actually happened and when. Here is a brief summary:

In May 1973, incoming Attorney General Eliot Richardson hired Archibald Cox to investigate the Watergate break-in. Nixon immediately began complaining, especially when Cox made it clear that he had every right to look at Nixon's taxes and other matters somewhat removed from Watergate. Then Nixon's taping system was discovered and Cox demanded the tapes. Nixon proposed an alternative: a 72-year-old hard-of-hearing senator (John Stennis) would listen to the tapes and report on what he heard, if anything. Cox refused. On Saturday, Oct. 20, 1973, Nixon ordered Richardson to fire Cox. Richardson refused and resigned instead. Then Nixon asked Deputy AG William Ruckelshaus to fire Cox, and he also refused and resigned. On the third try, Nixon found someone in the DoJ, Robert Bork, who was willing to fire Cox.

A firestorm ensued. On Monday, Oct. 22, 1973, House Speaker Carl Albert (D) authorized the Judiciary Committee to begin examining whether there were grounds to impeach Nixon. The chairman, Peter Rodino (D), complied. But it wasn't until July 1974 that the Committee voted, and even then, 11 of the 17 Republicans on the Committee voted against impeachment. The bill of impeachment passed the Committee only because the Democrats had a large majority on it.

In the 9 months between the Massacre and the committee vote, most Republicans supported Nixon, and that included then-governor Ronald Reagan of California and then-RNC Chairman George H.W. Bush. It was only when the Supreme Court ordered Nixon to turn over the tapes to Cox's successor, Leon Jaworski, that the storm broke, in part due to an 18-minute gap on one of the tapes. In a sense, that was a smokeless gun. A lot of people concluded that Nixon's refusal to turn over the tapes in the first place, and then the unexplained erasure when he was finally forced to turn them over, was overwhelming circumstantial evidence that he had obstructed justice. Eventually, a true "smoking gun" tape was uncovered; it was recorded three days after the "gap" tape, and on it Nixon can plainly be heard discussing the cover-up. On the day the true smoking gun tape was released—August 5, 1974—the case against the President ceased to be circumstantial. Nixon resigned four days later.

The lesson here is that Nixon held on for almost a year after firing Cox and might have escaped altogether were it not for the tape recordings, and the fact that both houses of Congress had large Democratic majorities. Is any of this history relevant now? We report, you decide. (V)