•  Where Things Stand in Unresolved Elections
•  Can't Donald Trump Do Anything Right?
•  Trump Jr. Thinks He May Be Indicted Soon
•  Now, This Is How To Take a Joke
•  Democratic Presidential Candidate of the Week: Beto O'Rourke


Where Things Stand in Unresolved Elections

Let's begin with a rundown of the numbers in the various elections from Tuesday that remain unresolved. Rows are colored based on which party currently controls the office, and asterisks indicate an incumbent:


The joke has been circulating that this election was not so much like Christmas for the Democrats as it was like Hanukkah, because the Party seems to get a new gift every day. The latest is that the defeat of Rep. Dana Rohrabacher (R-CA) became official on Saturday, he will be succeeded by Harley Rouda (D). As to the other remaining races, here's the latest:

That's where things stand. Some of these are not going to be resolved before the calendar turns to December, and it's possible some will linger into next year. (Z)

Can't Donald Trump Do Anything Right?

Normally, the ceremonial aspects of the presidency are the easiest part of the job. Someone sets up the pins for you, you knock 'em down, there's a round of applause and some nice photo-ops, and then you move on. With Donald Trump, however, even the easiest parts of the job are never all that easy, and result in widespread outrage and criticism. Is this his doing, for mishandling these occasions? Or is it because he is so thoroughly disliked by some people that fault will always be found? We report, you decide.

To start with, today is the 100th anniversary of the end of World War I. For those who are particularly precise, the anniversary happened at 5:00 a.m. EST (11th hour of the 11th day of the 11th month, Central European Standard Time). Donald Trump is in Europe to meet with the various leaders there, and to participate in ceremonies commemorating the anniversary. The meetings, though private, reportedly did not go well, and someone in the room (probably Emmanuel Macron) told reporters off the record that the Donald was "testy."

However, that is not what has people talking (and what has the Europeans irritated). It's that when time came to visit a military cemetery where many U.S. war dead are buried, Trump was nowhere to be found. Apparently, he did not want to go out in the rain, and so watched on a television from where he is staying. If true, that is pretty much the textbook definition of "bad optics." Given that the men and women who served in the Great War braved things like mustard gas and flamethrowers and "no man's land," it is not well for someone to beg out due to a little water, particularly when that someone also went to great lengths to avoid military service. Among those who spoke out was Nicholas Soames, a veteran, British MP for mid-Sussex, and grandson of a fellow named Winston Churchill. He tweeted:


Soames has received thousands and thousands of replies from Americans who are apologizing on their president's behalf.

And while Trump was managing to aggravate folks across the pond, his administration also managed to ruffle quite a few feathers back home, with their announcement of the first round of winners of the Presidential Medal of Freedom of the Trump presidency. Here is the full list:

Four of these are pretty standard choices. Staubach, famous as the former QB of the Dallas Cowboys, is also a Vietnam veteran, a successful businessman, and is involved in many charitable causes. Alan Page is also a former NFL player (Minnesota Vikings and Chicago Bears), and was the first black jurist on the Minnesota Supreme Court. Scalia is dead, of course, but this award is often given posthumously. And while many may not like his ideas, there is no question he was a devoted citizen and public servant and one of the titans of the Supreme Court for decades. And Orrin Hatch has certainly been in the Senate for a very long time. He didn't quite compile the record of a Bob Dole or a Lyndon B. Johnson, or even of a Joe Biden, but sometimes the PMoF is a "thanks for retiring" gold watch, so it's not too strange. After all, they gave one to Strom Thurmond, who was more associated with keeping folks in bondage than for giving them freedom.

After that quartet, we move onto the head-scratchers. While the award is indeed given posthumously sometimes, Elvis has been dead for 41 years, and the Babe shuffled off this mortal coil more than 70 years ago. It's also a little unclear what contributions they made to "freedom," though Ruth did give out a lot of shoes and toys to orphans in between eating hot dogs by the dozen and patronizing the services of female "professionals." Presumably the Presley award is an early Christmas present for the base, and Ruth is for Trump's father, who was a huge fan of the Bambino.

The one that is really raising peoples' hackles, of course, is the last one. Miriam Adelson is ostensibly being awarded for her "philanthropy." It's true that she's given a fair chunk of money away, but compared to some other Americans, she and her husband are pikers. In fact, the most generous American philanthropist that doesn't already have a PMoF (since #1/#2 Bill and Melinda Gates have already been recognized) is...George Soros. That probably wasn't going to happen, but how about Paul Allen, who has given away 80 times as much as the Adelsons, and who just passed away? Or Chuck Feeney, who has donated all but $2 million of an $8.0 billion fortune?

Of course, there is one thing that is true of the Adelsons that is not true of Allen, or Soros, or Feeney, or any of the other Americans who have given a billion dollars or more to charity. The Adelsons have also given over $100 million to GOP candidates and to the Party itself. Under the circumstances, quite a few people think that Mrs. Adelson has effectively purchased America's highest civilian honor for herself. Is it so? As we said, we report, you decide. (Z)

Trump Jr. Thinks He May Be Indicted Soon

By all indications, special counsel Robert Mueller's team has shifted into turbo mode, very possibly in order to finish their investigative work (as much as possible) before their investigation is shut down by acting AG Matthew Whitaker. That could very well mean that the other shoe is about to drop for some of the folks closest to the President. Like, for example, his son Don Jr. Sources within the White House, as well as those close to the First Son, say he is bracing for the possibility that he will soon be indicted.

If this does come to pass, the obvious charge would be perjury, since Trump Jr. certainly appears to have lied to Congress. However, nobody outside of Team Mueller really knows exactly what the special counsel has discovered. It's possible that conspiracy is on the table; if the Trump campaign did indeed coordinate with the Russians, Don Jr. and Jared Kushner are the two most likely conduits (at least, the most likely conduits who haven't already been nailed). Further, Mueller has undoubtedly been looking into the Trump Organization's finances, and it's not impossible that he has Trump Jr. on something like money laundering. In fact, keeping in mind Mueller's standard MO, he may have squeezed the small fish (Carter Page, Paul Manafort) to get dirt on the medium fish (Don Jr.), and he may be ready to squeeze the medium fish to get dirt on the big fish (Don Sr.). Point is, Junior is right to be nervous. (Z)

Now, This Is How To Take a Joke

For those who don't wish to watch, a picture of Crenshaw was displayed, and Davidson said, "This guy is kind of cool, Dan Crenshaw. You may be surprised to hear he's a congressional candidate from Texas and not a hit man in a porno movie." That did not go over so well with the audience, so Davidson punctuated the remark by noting, "I'm sorry; I know he lost his eye in war, or whatever." This, of course, did not go over well with Republicans, or veterans, or Republican veterans. Crenshaw himself expressed mild irritation, while many others called for an apology, or for Davidson to be publicly reprimanded, or suspended, or fired, or maybe even drawn and quartered.

The show does not often apologize for its jokes, even the controversial ones, but this weekend they made an exception. Besides the eyepatch joke, Davidson has also been in the headlines quite a bit due to his bitter breakup with pop star Ariana Grande. He returned to "Weekend Update" and offered a sincere apology. Here's that clip:

Again, for those who don't wish to watch, Crenshaw made a surprise appearance in which he accepted the apology, took a phone call on his cell (which just so happens to have an Ariana Grande song as a ring tone), got off a few bon mots at Davidson's expense, and then offered some thoughts on the meaning of Veterans' Day. In three minutes, he probably won himself 25,000 more votes for his reelection bid. In short, he and Davidson both took lemons and made lemonade. There may be a lesson in that for certain politicians who struggle to take a joke. (Z)

There is no person who was more often the subject of questions this week about his 2020 plans than Rep. Beto O'Rourke (D-TX), so let's run with that. 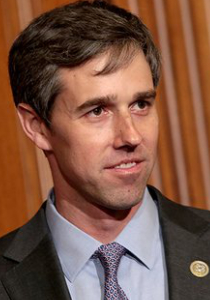 If you have a question about politics, civics, history, etc. you would like us to answer, click here for submission instructions and previous Q & A's

---The Votemaster and Zenger
Nov10 Trump's Worst Week?
Nov10 Trump Claims He Doesn't Know the Man He Appointed as Acting Attorney General
Nov10 In Florida, It is Deja Vu All over Again
Nov10 WSJ: Trump Knew All about Hush Money Payments to Daniels and McDougal
Nov10 Trump May Replace Wilbur Ross with Linda McMahon
Nov10 Ocasio-Cortez Can't Afford D.C. Apartment until She Starts Work
Nov09 Some Races Are Still Undecided
Nov09 Sinema Takes the Lead in Arizona
Nov09 Karen Handel Concedes
Nov09 Matthew Whitaker's Appointment as Attorney General May Be Unconstitutional
Nov09 Mueller Reportedly Working on "Final" Report
Nov09 What the 2020 Candidates Learned This Week
Nov09 White House's War With Acosta Grows Nastier
Nov09 Friday Q & A
Nov08 Split Decision
Nov08 Winners and Losers
Nov08 Tribalism Wins
Nov08 Exit Polls Show Pretty Much What Was Expected
Nov08 Voters Approve Ballot Measures
Nov08 How Voters Made History on Tuesday
Nov08 And So It Begins
Nov08 Trump Fires Sessions
Nov08 Mueller Just Got Some Help
Nov08 Welcome to 2020
Nov08 The Democrats Probably Lost the Senate until at Least 2022
Nov08 Democrats Had Modest Success in the State Legislatures
Nov06 Politico: Democrats Will Win House, Republicans Will Keep Senate
Nov06 What to Watch for on Tuesday
Nov06 Trump Closes with Anger
Nov06 Will There Be a Youth Wave?
Nov06 Early Turnout Was Huge This Year
Nov06 We May Never Know Who Won in Georgia and Texas
Nov06 We May Be Left in Suspense Tonight
Nov06 Today's Senate Polls