It was all-but-inevitable once Sen. Susan Collins (R-ME) announced her intention to vote for confirmation, and now it is official: Brett Kavanaugh was approved 50-48 by the Senate, and was quickly sworn in as the 114th justice of the Supreme Court of the United States. It's the narrowest confirmation in over a century; even Kavanaugh's new colleague Clarence Thomas will have bragging rights (having been confirmed 52-48, and thus with an actual majority of the senators supporting him.

Not surprisingly, the rest of the day on Saturday witnessed many Republicans taking victory laps, with Donald Trump—who has never heard the term "gracious winner"—leading the way. Rallying in Kansas on Saturday evening, the President declared, "I stand before you today on the heels of a tremendous victory for our nation, our people and our beloved Constitution." He also added that, "Since right from the moment we announced, radical Democrats launched a disgraceful campaign to resist, obstruct, delay, demolish and destroy, right from the beginning." It would seem that he's already forgotten that the GOP party line for the last two weeks has been that the blue team waited until the last minute to raise their concerns, as opposed to bringing them up at the start.

One Republican who did not take a victory lap was Collins, who did an interview with CNN that will air on Sunday. In that appearance, the Senator said, "I do not believe that Brett Kavanaugh was her assailant." and that "I do believe that she was assaulted. I don't know by whom. I'm not certain when." In an effort to walk both sides of the street, and to be all things to all people (well, to all Mainers), Collins has spent the last few days perfecting the art of being disingenuous. In her speech before the Senate, she listed all of the arguments that broke in Kavanaugh's favor (extensive experience, family man, etc.), but neglected to address any of the concerns about him (temperament, evasiveness, possible perjury). In the CNN interview, she said that both Kavanaugh and Ford said they were "100 percent certain" they were telling the truth, and so she had to use the FBI report as the tiebreaker. No mention, however, of the slapdash nature of the report, or of the fact that in an actual criminal case, the behavior of the witnesses while testifying is a major part of reaching a verdict. Anyhow, Collins is undoubtedly hoping this will all be forgotten when she stands for reelection in 2020. It won't be, and she is going to be in the race of her life, as Democratic donors nationwide (and Democratic voters in Maine) look to punish her for "saving" Kavanaugh. It is possible that Senate Majority Leader Mitch McConnell (R-KY), who is also up in 2020, will come in for some of the same treatment. However, unlike Collins, nobody has as yet raised nearly $4 million in small donations to defeat him.

The next big question, now that the confirmation process is over, is how this will affect the midterm elections. As Vox's Dylan Scott explains, the crystal ball is currently a little cloudy on that point, as there are data suggesting that the GOP is going to get a boost, and also data suggesting that the Democrats will get a boost. Generally speaking, it looks—at the moment—that the whole drama will help the GOP keep the Senate (primarily by making red-state Democrats, particularly Heidi Heitkamp, ND, and Claire McCaskill, MO, more vulnerable) and will help the blue team retake the House (primarily by encouraging educated, suburban women to get out and vote). Of course, there are still a little more than four weeks to the midterms, and so time for lots of movement in the polls. As we have already pointed out, angry voters tend to be more motivated than happy ones, so it's within the realm of possibility that the enthusiasm surge the GOP has enjoyed in the last week or so is actually a dead cat bounce and will fade away.

Meanwhile, if Kavanaugh thinks he's in the clear for the rest of his career, he's got another think coming. Already, a dozen complaints have been filed with the Washington D.C. circuit (the one that Kavanaugh will be departing), alleging judicial misconduct. All of them are based on his performance before the Senate Judiciary Committee, and Judge Karen LeCraft Henderson has deemed some of them substantive enough that she's forwarded them to Chief Justice John Roberts. And this, of course, is just the appetizer for whatever the Democrats might do if and when they retake control of the House (with the accompanying investigative and subpoena powers). Anyhow, the upshot is that this story is far from over, and will linger not only throughout the midterms, but beyond. (Z)

Yesterday, we discussed how not all Supreme Courts are created equal, and in circumstances where the Court's credibility takes a hit, its power and its effectiveness can take a big hit. Today, we'll take a look at that same basic dynamic, except on an individual basis.

Let us begin by once again quoting CNN's Chris Cillizza, who wrote, "There are no asterisks next to the names of the members of the Supreme Court. Whether you got there on a unanimous Senate vote or barely survived, your vote still counts the same." The specific point and the larger argument are both so questionable that it's hard to believe that this actually came from Cillizza's pen (or keyboard). It is true, mathematically-speaking, that each justice's vote has a value of "1." However, it is also the case that some justices' influence far exceeds that of their colleagues. One thinks of Oliver Wendell Holmes, Louis Brandeis, William Brennan, or Joseph Story, who were all giants in their respective eras. And if some justices are unusually influential, it follows that there must be a few who are at the other end of the spectrum. Here, in fact, is a list of five justices who were unusually lacking in effectiveness and influence (in chronological order of service):

These are largely extreme cases; Brett Kavanaugh probably won't evince problems quite so severe as these (though he's certainly not off to a good start, particularly vis-a-vis the Clarence Thomas precedent). Even if he doesn't sink to the Taney or McReynolds level, though, it is clear that there is already a well-established history of specific justices being marginalized, for any number of reasons. It is very likely that John Roberts, who as chief justice must take a special interest in the Court's reputation, will avoid assigning important or controversial opinions to Kavanaugh for several years, or maybe longer. Roberts may even avoid controversial cases altogether for a term or two or three. The point is that Kavanaugh will begin his service on the Court in a hole, whether he realizes it or not.

Now, in the interest of completeness, let us also note the most significant case of a justice who got off to a bad start, and then managed to bounce back:

So, there you have it. Maybe Kavanaugh will follow in Matthews' footsteps, although if he follows them exactly, it would require Donald Trump to leave office. That is probably a deal that a lot of Democrats would take, particularly at this point. (Z)

About Those Unemployment Numbers

This week, the United States' unemployment rate reached its lowest level (3.7%) since December 1969. Needless to say, Donald Trump could not wait to fire up Twitter to brag:


That certainly seems very impressive, to have driven unemployment to a level not seen since the year a man first walked on the moon. But is it actually all that much of an achievement? Maybe, maybe not. There are a lot of moving parts here, making that a pretty tough question to answer. Among the issues:

These are all, to a greater or lesser extent, mathematical problems. And so, the list does not even include the fact that Trump called the unemployment numbers "fake news" when they were reported under Obama's leadership, but then embraced them as truth as soon as he was president.

In any event, it does not matter when Trump brags about the unemployment numbers, or when we say "wait a minute." What matters is the question that Ronald Reagan asked during each of his successful presidential runs: "Are you better off than you were four years ago?" The numbers suggest that, for the majority of Americans, the answer is "no" rather than "yes." This may help explain why the ostensibly booming economy does not appear to be translating into GOP gains in the polls, forcing the Party to turn instead to Supreme Court dogfights and kneeling football players. (Z)

It slipped under the radar—probably not coincidentally—due to the drama surrounding Brett Kavanaugh. However, this week, the International Court of Justice ordered the Trump administration to make certain that sanctions against Iran did not stop the supply of food and medicine to those in the country who need it. The administration responded by withdrawing from the 1955 treaty that normalized relations with Iran, and which served as the basis for the Iranians' lawsuit.

The administration, with Secretary of State Mike Pompeo taking the lead, argues that the treaty was entirely symbolic, and that the U.S. will continue to send aid to Iran, anyhow. If both of those things are true, one wonders why it was necessary to withdraw from the treaty. Folks who do not work for the administration, and who have some expertise in the matter, say that this is another step in the administration's strategy to isolate Iran from the rest of the world. Who knows what long-term impact this will have, but it seems safe to say that it will not increase Trump's odds of taking home that Nobel Peace Prize in 2019. (Z)

As was the case last week, something like two-thirds of all the Senate-related news this week had to do with Brett Kavanaugh, as partisans on each side of the aisle attacked their opponents for their positions on the matter. Here is a rundown of the non-Kavanaugh stories:

We can't have a frontrunner every week, so this week it's a dark horse. As always, the pros and cons refer to the general election and not the primaries. 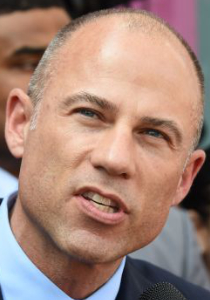