The entire Brett Kavanaugh story has taken so many twists and turns that very little is ever certain. And even if something is certain right now, it might not be in 12 hours. So it is with the newly-reopened FBI investigation into Kavanaugh's's background. Early in the day on Saturday, the word was that FBI Director Christopher Wray would be strictly limited in terms of what he could look into. Specifically, he was given permission to explore Christine Blasey Ford's story, as well as that of accuser #2 Deborah Ramirez, but was forbidden to talk to accuser #3 Julie Swetnick. It would seem that on Saturday afternoon, someone pointed out to the GOP leadership that such restrictions were rather arbitrary, and would make it appear that the allegations against Kavanaugh were not being taken seriously. Consequently, early Saturday evening, Donald Trump announced that the Bureau has "free rein" to follow up on whatever leads it deems credible.

Who knows for sure how true that is, although the odds are pretty decent that with that public statement in his back pocket, Wray will conduct a vigorous investigation. Majority Leader Mitch McConnell (R-KY) may be willing to risk the House, and even the Senate, to fill that seat on the Court, but the Director is not likely willing to risk the Bureau's reputation. He has definitely already gotten to work, as Ramirez has already chatted with the FBI. So has Leland Ingham Keyser, who was allegedly at the party where Ford says she was assaulted. Swetnick has not talked to anyone with the Bureau, as yet, but that's probably imminent. Meanwhile, there will be no need to try and track down accuser #5 (the boat rape). That one didn't quite add up, since the tipster said he "knew" the victim (not that he "was" the victim) and that he was able to identify Kavanaugh from his yearbook photo (how, if you weren't there?). In any case, it turns out that story was false, and the fellow who made it up may now be facing criminal charges.

While the FBI does its work, it's going to get a fair bit of help from media on both sides of the aisle, whether the Bureau wants it or not. Outlets who are more friendly to Ford have been digging up former classmates of Kavanaugh. Most of those, like Liz Swisher, have been critical of Kavanaugh's testimony. Outlets who are more friendly to Kavanaugh have been digging up dirt on his accusers. Fox News, for example, is reporting that Swetnick was accused of misconduct and falsifying her resumé while working for an Oregon tech firm. She denied the allegations, through her attorney Michael Avenatti.

Meanwhile, the general consensus among legal experts is that it's going to be pretty hard for the FBI to confirm (or refute) any of the allegations that have been made against Kavanaugh. Somewhat more likely, however, is disproving some of the other things he said, which would make him guilty of perjury. So, that is probably his single-biggest worry this week. Assuming, of course, that he doesn't withdraw first, either of his own volition, or at the instruction of the GOP muckety-mucks. (Z)

"Saturday Night Live" Pokes Everyone in the Eye

If a person finds themselves on "Saturday Night Live's" radar, it is time for them to brace themselves. If that person is a political figure, this is all the more true, since political satire is the show's bread and butter. And the trifecta is if a political figure makes headlines right before the show comes back from a break, during which the cast and writers have had plenty of time to recharge their batteries and hone their jokes. So it was on Saturday, when the show featured an extended opening lampooning Thursday's hearings:

The Democratic senators came in for some gentle ribbing: Dianne Feinstein's stodginess, Cory Booker's mugging for the camera, Amy Klobuchar's nasally voice. The Republican senators got it a little worse; Chuck Grassley was played as a misogynistic buffoon, while Lindsey Graham was a redneck yokel. And, in one of SNL's favorite digs at friends of Trump, the South Carolinian was played by a woman (Kate McKinnon, who also plays Jeff Sessions).

And then there was Brett Kavanaugh, with actor Matt Damon making a special appearance to handle the portrayal. It's worth watching the sketch, because Damon hit every mark he was trying to hit. His Kavanaugh was sometimes outraged, sometimes reduced to tears, and occasionally forced to chug a beer to deal with the hearing. He also had a difficult time with not incriminating himself, like when he declared his intention to see the process through to the end, because "Brett Kavanaugh doesn't know the meaning of the word 'Stop'."

Of course, the subject also occupied a fair portion of the show's "Weekend Update" faux news segment. Anchor Colin Jost got off a number of bon mots, like, "I gotta say, you're not really helping yourself in a drunken assault case when you yell about how much you like drinking and how strong you were at the time" and "On an optics level, I get why Republicans [hired someone to ask Christine Blasey Ford questions], but if you're not the right person to ask questions at a Senate hearing...maybe you're not the right person to be a Senator." The latter line particularly brought down the house. Donald Trump seems to have abandoned his habit of tweeting on Sunday morning that SNL should be canceled, but this week's program might see a return of that. Meanwhile, the show will be weekly as Kavanaugh's fate is decided, so Matt Damon probably should keep his weekend calendar open. (Z)

Under the Radar No. 1: Democrats Can Sue Trump Over Emoluments

One wonders if Donald Trump is enjoying a few days where the microscope is trained on someone other than him. Certainly, it's allowed a few somewhat embarrassing stories to largely fly under the radar. One of these is a ruling that U.S. District Judge Emmet G. Sullivan issued on Friday, which says that a lawsuit that 200 Democratic senators and representatives filed against Trump, charging him with violating the Constitution's emoluments clause, can move forward.

This day was bound to arrive sooner or later, once Trump decided not to divest himself of his business holdings. Given how vague the emoluments clause is, along with the fact that it was written by 18th century men who could not have anticipated the nature of a 21st century multinational business, it is not clear that Trump has violated the Constitution. But it is also not clear that he hasn't. That makes it a matter for the courts; the only issue was finding someone who has standing to sue. Now, we've got that someone (and there's also a case filed by the Attorneys General of Maryland and D.C. that is likely to be allowed to proceed). So, we are going to find out exactly what the limits of the emoluments clause are (and, as a byproduct, Donald Trump's tax returns are likely to become a matter of public record). (Z)

Under the Radar No. 2: Michael Lewis Book

Michael Wolff's anti-Trump book did some damage, Omarosa Manigault Newman's did some more, and Bob Woodward's tome was particularly devastating (in part, at least, because it apparently prompted the anonymous New York Times op-ed). Michael Moore's anti-Trump film is currently in the process of bombing. Next up to take their shot is Michael Lewis, who may be America's most compelling nonfiction author, with books like Moneyball, The Blind Side, Liar's Poker, and The Big Short to his name.

Lewis' Trump book is called The Fifth Risk, and the teaser on the cover asks, "What are the consequences if the people given control over our government have no idea how it works?" The promotional machine has begun gearing up, and an excerpt from the tome was released this week, one covering the campaign, and how unprepared Trump was for his surprise victory. The portion that is getting the most attention is this one, which recounts the scene on the night of the election:

Chris Christie was sitting on a sofa beside Trump when Pennsylvania was finally called. It was 1.35am, but that wasn't the only reason the feeling in the room was odd. Mike Pence went to kiss his wife, Karen, and she turned away from him. "You got what you wanted, Mike," she said. "Now leave me alone." She wouldn't so much as say hello to Trump. Trump himself just stared at the TV without saying anything, like a man with a pair of twos whose bluff has been called. His campaign hadn't even bothered to prepare an acceptance speech. It was not hard to see why Trump hadn't seen the point in preparing to take over the federal government: why study for a test you will never need to take? Why take the risk of discovering you might, at your very best, be a C student? This was the real part of becoming president of the US. And, Christie thought, it scared the crap out of the president-elect.

If Karen Pence isn't careful, her husband might change his policy of never having dinner with other women. Meanwhile, it is clear that Chris Christie is a key source for the book, and so apparently is not much of a Trump loyalist anymore. In any case, while the book and the excerpt got a few headlines, the coverage was far less than Wolff, Manigault Newman, or Woodward got. Maybe Trump book fatigue is setting in, but more likely, Lewis had the bad luck (and Trump the good luck) that the release process began the same week as the Kavanaugh hearing. The book will actually be on sale on Tuesday; we will see if it starts to get more attention while everyone waits for the FBI to do its work. (Z)

Under the Radar No. 3: Meeting with Trudeau

Even though Donald Trump escaped a certain amount of bad press later in the week, as the nation's eyes were focused on Brett Kavanaugh and Christine Blasey Ford, he did have a bad Monday and Tuesday, thanks to his disastrous appearance before the United Nations. Still, some of the fallout from that appearance has gotten limited attention, like the fact that Trump canceled his meeting with Canadian PM Justin Trudeau.

Now, that may not seem so bad, and might not even be worthy of coverage. After all, world leaders have busy schedules, and undoubtedly meetings get scheduled and rescheduled all the time. The reason this is a story (and the reason Trump should be glad that attention is elsewhere) is that he didn't actually have a meeting scheduled with Trudeau. Which means that either the President was just throwing a temper tantrum when he "canceled," or else that whoever keeps track of his schedule is of questionable competence. In any case, Trump will also not be meeting with Trudeau this week. The same is true of Theresa May, Emmanuel Macron, Angela Merkel, and, for that matter, Winston Churchill, Genghis Khan, Julius Caesar, and Santa Claus. (Z)

Much of this week's Senate news, of course, was made in one chamber of the U.S. Capitol on Thursday. Even those senators who were not there made sure to weigh in, with nearly all the GOP senators and candidates supporting Brett Kavanaugh, and nearly all the Democratic senators and candidates supporting Christine Blasey Ford. That said, there are also some non-Kavanaugh stories:

We've been on the East Coast for the last several weeks, so let's head west again in our series of Democratic presidential candidate profiles. As always, the pros and cons refer to the general election, and not the primaries. 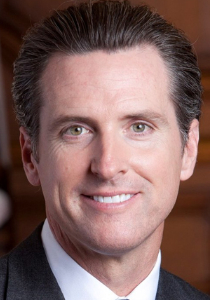