Ron Paul tried hard to win the Nebraska state convention this weekend but came up short. He has won a plurality in four states, but the RNC rules say that a candidate must win a plurality in five states to have his name be put in nomination, in which case he gets 15 minutes of speaking time. Since Paul didn't make it, he will only get time if Mitt Romney decides to give it to him and that will certainly be conditioned on having Romney's team vet his speech in advance.

The battle over Romney's tax returns is getting more pitched by the day. Now highly respected conservative journalists like Bill Kristol and George Will are calling for Romney to release 12 years' worth, as Romney's father did when he ran for President and as Obama has done. Obama is keeping the pressure up and the drumbeat is only going to get louder.

Although Virgina was once solidly Republican (after it was solidly Democratic for a century), it is now one of the most contested swing states. President Obama spent 2 days campaigning there and Mitt Romney sent in an army of surrogates including former New York city mayor Rudy Giuliani. All this attention just emphasizes how important Virginia has become. The northern suburbs around D.C., the eastern cities, and the inner suburbs around Richmond have become Democratic while the southern and western parts of the state remain Republican. The two are roughly in balance. Obama is lucky that such an important state is so close by, so he will undoubtedly campaign there often, more so than in Colorado, a similar state that was once Republican but is rapidly trending blue. If Obama wins the 18 states that have voted for the Democrat in the past 5 presidential elections plus D.C. he gets 242 electoral votes. Add to that Virginia (13), Colorado (9), and New Mexico (5), has has 269. All he needs is one more state, even little New Hampshire, Nevada, or Iowa will do. With these states he can lose Ohio, Florida, and North Carolina and still win. Romney understands this very well so the battle for Virginia will be very fierce. This is why Obama campaigned the whole weekend in Virginia in the pouring rain. Besides, the image of a President soaking wet talking to voters provides good photo material. It is hard to imagine Romney getting drenched while campaiging.

A big issue in the campaign is whether the top marginal income tax rate is too low or too high. Currently it is 35%. Is that high? Depends on what you compare it to. Compared to the Cayman Islands, where it is 0%, 35% is pretty high. Compared to Sweden, where it is 58%, it is not so high. Fortunately, there is a lot of comparative data out there. Top marginal tax rates for many countries are available at taxrates.cc. Suppose we take all the countries in North America, Central America, South America, and Europe for which data is available, and add to the list the major countries in Asia, Africa, and the Pacific to come up with a list of 100 countries and sort it by the top marginal tax rate. Here is what we get. 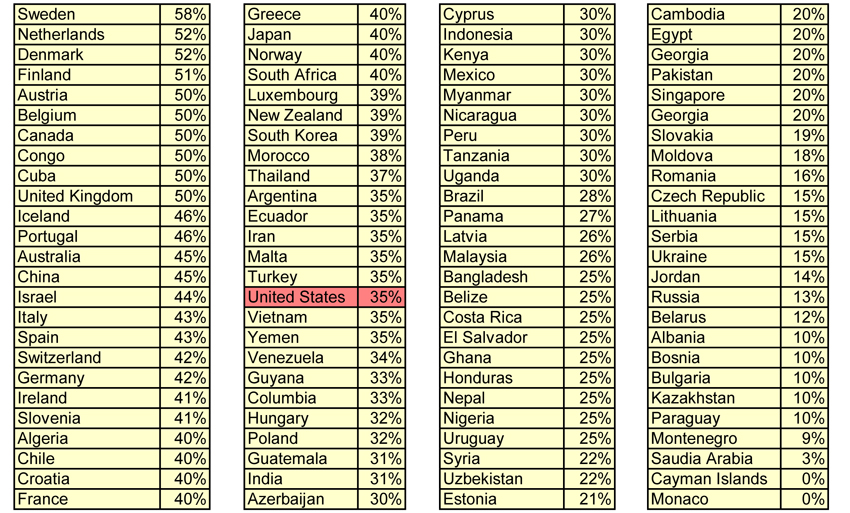 In this list, the United States is in the second quartile, below virtual every other rich country, but with a higher rate than most poor countries. 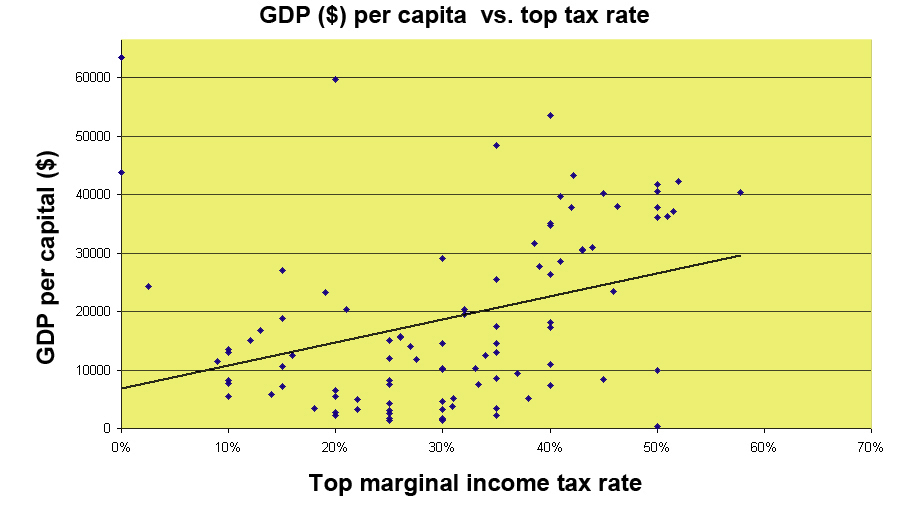 Clearly there is a positive correlation. The higher the tax rate, the higher the GDP per capital. Read sideways, the higher the GDP per capita, the higher the marginal tax rate. Note that correlation, despite a fair amount of scatter, does not imply causation. High tax rates do not cause wealth on their own and wealth does not cause high tax rates. Why are they correlated then? One explanation is that countries with a high tax rate invest more (tax) money in infrastructure (roads, rail lines, airports, bridges, etc.), schools, public safety, and other things that a country needs to create wealth. Alternatively, countries that are rich have perhaps decided that everyone has enough so some of it can be taken in the form of taxes for the public good.

In any event, there is clearly no anticorrelation worldwide with low tax countries being much better off than high tax countries although there are exceptions like the Cayman Islands (0% tax rate) and Saudia Arabia (2.5% tax rate). But these countries are special cases: the Cayman Islands live from tourism and rich investors stashing their money there and Saudia Arabia is lucky that a lot of dinosaurs used to live there.

Who's Side Are You On?

A new, fun quiz at isidewith.com asks you a number of policy questions on the economy, domestic and foreign policy, the environment, and so on, and then tells you which candidate you most closely match. You can also compare with Facebook friends who have taken the quiz.