Editorial note: The ad in the right-hand column is from a commercial company selling Obama stickers. Paid ads from companies selling Romney stickers are equally welcome.

A new Purple Strategies poll of 12 swing states shows President Obama with a lead of 49% to 44% over Mitt Romney. In August, the same poll had Romney ahead by 1%, so this is a sharp swing towards Obama. Part of Romney's problem is that only 38% of the voters see him in a favorable light vs. 52% who regard him unfavorably. Obama's favorability is above water with 49% to 46%.

Willard M. Romney has released his 379-page tax return. His income was $13.69 million, of which $450,740 was earned (business) income. The rest was mostly interest, dividends, and capital gains. He paid $1.9 million in federal tax. Below is the income portion of Romney's tax return.

Romney and his wife gave $4 million to charities, much of it to the Mormon Church, but deducted only $2.25 million. Had they deducted all of their donations to charity, their tax rate would have been 10.55%, which would have caused Romney political headaches, so he decided to forgo part of his donations. However, win or lose, after the election he is free to file an amended return claiming the full deduction, in which case IRS will cut him a check.

Vice-presidential candidate Paul Ryan released an amended 2011 tax return yesterday as well. In his initial return, he forgot to list $61,122 of his income. With the addition, his total income was $323,416 on which he paid 20% tax. Ryan claims that omitting the $61,122 was a mistake, which is surprising given that it is 19% of his total income, not something people normally forget.

Medicare was topic A at the annual convention of the AARP (formerly the American Association of Retired Persons) in New Orleans. About 5000 people attended. President Obama and Rep. Paul Ryan (R-WI) both addressed the gathering, Obama via a live satellite feed and Ryan in person. Obama defended Obamacare and said: "No American should ever spend their golden years at the mercy of insurance companies." He was applauded. In contrast, when Ryan called for the repeal of Obamacare, he was repeatedly booed. Ryan attacked Obama for cutting $716 billion from Medicare even though he has repeatedly been told that is not true. What is true is that Obamacare slows the growth of Medicare in the future by that amount, the same amount that his own plan slows it.

Obama also hit Romney on his "47%" video by saying: ""Medicare and Social Security are not handouts. You've paid into these programs your whole lives," reminding the seniors that many of the 47% of the population who do not pay federal income tax are elderly people living on Social Security and whose income is so low they fall below the threshold at which the income tax starts.

Romney Devotes a Large Amount of Time to Fundraising

While Obama is out campaigning almost nonstop, Mitt Romney is frequently hidden away in some small room talking to potential donors. For example, he flew across the country yesterday to hold one 20-minute public rally at the University of Nevada at Las Vegas but spent the rest of the day talking to wealthy donors at a casino as well as holding another fund-raising event near San Francisco. He has been frequently criticized for not being out there on the hustings much. For example, Peggy Noonan, Ronald Reagan's speechwriter, said: "Romney doesn't seem to be out there campaigning enough." If Romney were to put more of his own fortune, estimated at $250 million, into the campaign, he wouldn't have to beat the bushes for money so much, but apparently he does not want to invest his own money in the campaign.

It seems that Romney's strategists don't think that personal appearances by the candidate matter much any more. What is key, in their view, is raising tons of money and then saturating the airwaves with attack ads in battleground states. If Romney loses, in the postmortems, a lot of people will say that part of the reason he lost is that he barely talked to the voters personally. Of course, Romney's handlers may simply realize that when he appears in public in unscripted situations, he tends to say things they later regret, so the game plan is simply to avoid public events as much as possible.

Half the Nation Can Vote Starting Today

Forget about election day being Nov. 6. For about half the country, election day is here now. In-person voting begins in Idaho and South Dakota today. In 25 states, absentee voting starts today or has already started. About 35% of all votes are likely to be cast before election day.

This surge of early voting could have a huge effect on the campaign. By all indications, Obama is ahead now, although that could change after the debates. Consequently, his supporters are all revved up and eager to vote, whereas Romney supporters may hold off until things improve, but if they don't, his voters may not bother to vote at all, which could affect downticket races. Since there is no way to unvote, any mistakes or gaffes made later in the campaign will not affect votes already cast. 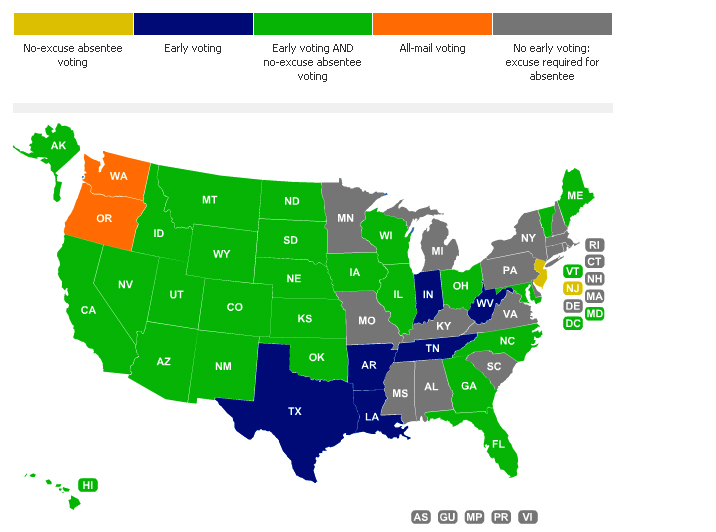 As can be easily seen, most of the country now allows voters to cast their ballots early or get an absentee ballot just by asking for one, no reason required. In Washington and Oregon, all voters are automatically sent a ballot by mail. Nevertheless, a number of states in the Northeast and Southeast cling to the old "voting is done in person on election day" model.

We have had five polls of the Wisconsin Senate race in the past few days now. In four of them, Rep. Tammy Baldwin (D-WI) is leading former four-term governor Tommy Thompson. Earlier in the year, Thompson was consistently ahead. Most likely Obama's rise due to the Democratic convention and Romney's missteps of late are already affecting downticket races.