The Republicans had a great day yesterday, capturing all the competitive Senate seats except Louisiana, which will go to a runoff on Dec. 2 Rep. Bill Cassidy (R-LA) is strongly favored to win the runoff. Assuming he wins and the other states remain as they are now (Virginia and Alaska could yet flip), the Republicans will pick up 9 seats and have 54 seats in the new Senate. It is also possible that Sen. Angus King (I-ME) will jump ship and caucus with the Republicans. All in all, this looks like another wave election. While former House Speaker Tip O'Neill once famously said: "All politics is local," that has been completely reversed this year. Starting now, all politics is national. A Republican running for dogcatcher could probably blame all the stray dogs on Obama and win.

This was going to be a very difficult year for the Democrats no matter what else happened. For starters, the President's party nearly always loses seats in the both the Senate and House in the 6th year of a President's term, as shown below. 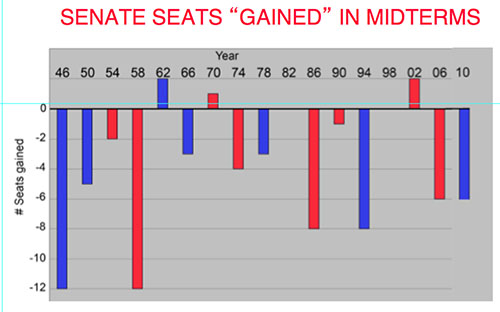 A second factor is the map. The class II senators, who were up this year, are largely concentrated in deep red states that normally send Republicans to the Senate. In 2008, Democrats there held tightly to Obama's coattails and won. Now these senators were on their own and the situation returned to normal: red states elect Republican senators. One case in point: Sen. Kay Hagan (D-NC) has been a centrist senator, ran a flawless campaign against a highly unpopular state representative, had tons of money, and still lost.

A third factor is the low turnout of minorities and young people--key Democratic constituencies--in midterms, and those who did turn out were prevented from voting in some cases by new laws requiring IDs that many poor people don't have and can't afford to get. Recent Supreme Court decisions on voter ID laws and campaign spending by outside groups have helped the Republicans enormously.

A fourth factor is the low approval ratings of President Obama. While technically he was not on the ballot, de facto he was on the ballot in 36 Senate races and 36 gubernatorial races. Almost every Republican in the country ran on the slogan: "The country's a mess and it's Obama's fault." To some extent, this election resembled 2006, when most voters said the country was headed in the wrong direction and George W. Bush got the blame.

Now that Republicans control both chambers of Congress, they will be expected to govern. Passing bills to repeal the ACA once a week is not likely to be the ticket to win in 2016, when the map strongly favors the Democrats, with 24 Republican senators up for reelection, many of them in blue or purple states, and only 10 Democrats up for reelection. Governing won't be easy for majority leader Mitch McConnell, with a number of new tea party senators showing up in January, most of whom will take their marching orders from Sen. Ted Cruz (R-TX), not McConnell.

While races for governor have been overshadowed by the battle for the Senate, there were some real foodfights out there for governor as well. In Florida, Gov. Rick Scott (R-FL) was reelected over Republican-turned-independent-turned-Democrat Charlie Crist. In Wisconsin, Gov. Scott Walker (R-WI) was also reelected over bicycle executive Mary Burke. Walker is a likely Presidential candidate in 2016 because he appeals to both the tea party and the establishment, something that Sen. Ted Cruz (R-TX) and Sen. Rand Paul (R-KY) do not.

Not only did the Republicans hold their own in key races, but they also picked up governorships in Massachusetts, Maryland, and Illinois.

The only bright spot for the Democrats in governors' races was the replacement of unpopular governor Tom Corbett (R-PA) with Democrat Tom Wolf.

How Did We Do?

If you compare yesterday's map with today's, you will see that we called only one state wrong. Like almost everyone else, we expected Sen. Kay Hagen (D-NC) to win. She had been leading in almost all polls for weeks, but somehow all the polls were wrong. In Kansas, yesterday we said Kansas was too close to call, but Sen. Pat Roberts (R-KS) just rode the national Republican tide to victory.

---The Votemaster
Nov04 Election Day Is Finally Here
Nov04 Republicans Likely to Win Senate
Nov03 Both Parties See Campaign Looking Favorable for the Republicans
Nov03 Republicans Are Bragging about Their Chances
Nov03 Early Ballots in Colorado Now Favor Democrats, But Possibly Too Little Too Late
Nov03 Nate Silver Gives Republicans a 73 Percent Chance of Capturing the Senate
Nov03 Most Voters Will Use Paper Ballots Tomorrow
Nov03 Romney Says He is Not Running in 2016
Nov03 Cruz Wants to Make the Senate Like the House
Nov02 Many Undecided Voters May Not Vote
Nov02 Good Weather Equals Bad News for Republicans
Nov02 McConnell Campaign Sends Election Violation Notice Mailer to Voters
Nov02 Reid Says Control of the Senate Depends on Iowa
Nov02 No Matter the Outcome, Neither Party Will Have a Mandate
Nov02 Conservatives Freaking Out at a Possible Bush Run in 2016
Nov01 GOP Takeover of the Senate May Be Short Lived
Nov01 The Trend is Towards Single-Party Control of the States
Nov01 Fighting for the Last 1000 Votes in Alaska
Nov01 Landrieu Tells the Truth and Gets Attacked for It
Nov01 Iowa Could Be the Key to Control of the Senate
Nov01 In 2016, the Focus Will Be Blue-state Republicans
Nov01 Biased News Coverage Flourishes as Election Day Approaches
Oct31 Larry Sabato Calls Senate for Republican
Oct31 Democrats Playing the Race Card in the South
Oct31 Legal Battles in Georgia Very Likely
Oct31 Republican Governors Association Donors Get Special Access
Oct30 New Senate Could Have As Many as 27 Women
Oct30 Colorado Senate Race Is All about Birth Control
Oct30 Are There Really Many Moderate Voters?
Oct30 Sometimes Sure-Thing Candidates Fizzle Out
Oct30 Republicans Poised to Make Gains in State Legislatures
Oct30 Obama Hides, Hillary Soars
Oct29 Georgia Judge Rules against Registering Voters
Oct29 Five States That Might Hold Surprises
Oct29 Republicans Close Polling Place To Suppress Student Vote
Oct29 McConnell May Get His Wish--and Regret It
Oct29 Obama Made a Rare Campaign Appearance for Mary Burke
Oct29 Dance for DCCC Chair is in Full Swing
Oct28 Do You Need an ID to Vote?
Oct28 What Name Should a Married Female Candidate Use?
Oct28 Everybody Wants To Be DSCC Chairman in 2016
Oct28 Cheapskate Senators Could Be Hurting the Republicans
Oct28 If Pat Roberts Loses, It is His Own Fault
Oct28 Begich and Murkowski in Fight over Photo
Oct28 Larry Flynt Spices Up the Kentucky Senate Race
Oct27 Voters Expect Republicans to Win the Senate
Oct27 People Really Dislike Congress
Oct27 Kentucky Newspapers Endorse Alison Lundergan Grimes
Oct27 Unusually Many Senate Races Are Up for Grabs
Oct27 Ted Cruz and Mike Huckabee Are on a Collision Course