•  Trump Victories in Iowa and New Hampshire Could Seal the Deal
•  Trump Says He May Skip Next Debate
•  Bill Clinton To Campaign in Iowa This Week
•  Why Sanders Can't Crack the Black Vote
•  North Carolina Voter ID Law on Trial
•  Senator, You're No Jack Kennedy
•  Makers of Doctored Planned Parenthood Video Indicted
•  Cruz's Insurance Tale Doesn't Stand up to Scrutiny
•  Sanders Has His Own Ice Cream


Trump Victories in Iowa and New Hampshire Could Seal the Deal

Just two weeks ago, Sen. Ted. Cruz (R-TX), was leading in Iowa. Now Donald Trump is #1. But the race is still volatile. Up to 40% of the Iowa Republicans could yet change their minds, especially after the debate in Des Moines Thursday. If Trump wins Iowa and then New Hampshire a week later, he will have a lot of momentum going into the Feb. 20 South Carolina primary. If he wins that, he may be unstoppable.

He owes some of his recent gains in Iowa to the Republican pooh-bahs, all of whom hate him and think he would be a short-term and long-term disaster for the Party. Nevertheless, they have been saying nice things about him lately because they hate Cruz even more. However, if Trump wins Iowa, it will be much harder for an establishment candidate, like Sen. Marco Rubio (R-FL), to get traction in time.

A Trump triumph in Iowa will generate a big sigh of relief from the party leadership, but it will last only until they realize that Trump is a weak general election candidate. In the Fall, the Democrats will replay his derogatory remarks about Latinos, Muslims, women, and disabled people until the cows come home. If Trump tries to take back his comments that Mexicans are rapists, his base will see him as just another pandering politician, but if he sticks to his guns, Democrats will get 75% of the Latino vote or more, dooming Trump. (V)

Trump Says He May Skip Next Debate

Trump may boycott Thursday's debate, ostensibly because he is unhappy about the involvement of "unfair" Megyn Kelly, with whom he has previously and infamously locked horns, Donald Trump says he is considering skipping Thursday's debate on Fox News. Fox, its part, says that Trump is just scared of Kelly.

Though the threat made the front pages of most news sites, there is absolutely no chance that Trump will carry through with it. He is not going to give up the chance at two hours' free publicity just days before the Iowa caucuses. This is a preemptive strike—either Trump's whining causes the moderators to take it easy on him, or, if they don't, it sets him up to declare that he was "right" after the debate and that the journalistic establishment, like the political establishment, is out to get him. Either way, he comes out ahead, so it's a shrewd bit of politicking.

Or maybe not. Fox News is strongly biased towards mainstream Republicans and has been giving Trump trouble all year. To prove that it is "fair and balanced," Roger Ailes may instruct Megyn Kelly to give it to Trump with both barrels and make him squirm as much as possible on stage. Picking a fight with Fox News is a risky strategy for any Republican. (Z & V)

Bill Clinton To Campaign in Iowa This Week

Hillary Clinton is pulling out the big gun—no, make that the big dog. Husband Bill is heading to Iowa this week to barnstorm the state for his wife. She really wants to win Iowa to stop Sanders' momentum, since he is likely to win New Hampshire, in part because he is from an adjacent state and very well known in the Granite State. Clinton sent out a desperate fundraising plea yesterday asking her supporters to pony up, reminding them of what happened after she lost Iowa to Barack Obama in 2008.

In reality, while losing Iowa would be painful and give Sanders a lot of momentum and money, the situation this year is completely different from 2008. Here is the 2008 map showing the states that Obama and Clinton each won. 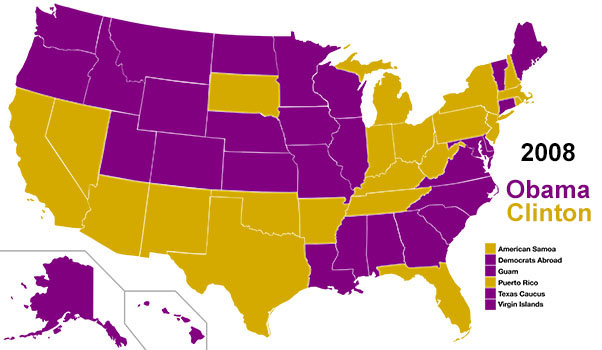 The key takeaway here is that Obama swept the entire South, where roughly half the Democratic primary voters are black. He won hundreds of delegates there. The big question facing Sanders is can he pull in large numbers of poor, evangelical, black voters. He is well aware of this, of course, and is doing his best by talking about economic issues they care about like the minimum wage, but even with back-to-back victories in Iowa and New Hampshire, he has a steep hill to climb. The average of the most recent South Carolina polls, for example, show Clinton with a 40-point lead, 66% to 26%.

If Sanders can't win the South, his only other route to the nomination is to win a number of the big blue states like New York, Pennsylvania, Michigan, and California, where Clinton beat Obama in 2008. If Clinton was able to beat a dynamic young candidate who would be the first black President, are liberal voters there going to give up on "first woman President" to get a slightly more liberal candidate? If the recent Field poll of California is any indication, that route will also be uphill for Sanders, since Clinton is currently leading him there 46% to 35%. (V)

A pair of recent high-profile essays, one by the Christian Science Monitor's Harry Bruinius and the other by The Atlantic's Ta-Nehisi Coates both tackle the same basic question: Why aren't black voters embracing Bernie Sanders? Their essential conclusion is the same: The Vermont Senator sees things too much through the lens of class, and not enough through the lens of race.

That Sanders thinks in this way is hardly surprising, as socialism—and its cousin Marxism—conceive of economic inequality as the primary basis of oppression, and imagine that once that inequality is addressed, other forms of oppression will disappear. This may very well be a fair assessment in some places, where social class is the primary line that divides people. And it is not a coincidence that socialism has the broadest support in places that are racially homogeneous—Scandinavia, France, Italy, and 94% white Vermont. But, as both Bruinius and Coates point out, not all forms of oppression in America are tied to one's economic status. Poor whites are nowhere near as likely as poor blacks, for example, to be victims of police brutality, to be incarcerated, or to be disenfranchised. Sanders' Democratic Socialism seems to largely miss that rather important point, and if he is unable to convince black voters very soon that he gets it, he's likely to have a very bad day on Super Tuesday. (Z)

In 2013, the U.S. Supreme Court overturned the part of the 1965 Voting Rights Act that says states with a history of racial discrimination need prior approval from the U.S. Dept. of Justice before changing their voting laws. North Carolina immediately grabbed its chance and the Republican-controlled state legislature passed a bill requiring voters to present photo ID to vote. The bill was signed by the Republican governor, Pat McCrory. The Justice Department then sued the state; the case opened yesterday in federal court in Winston-Salem, NC. The federal government and NAACP are arguing that the photo ID law is discriminatory because many more blacks than whites lack government-issued photo ID documents. The state says the law is needed to combat voter fraud. The case is certain to end up in the U.S. Supreme Court—the only issue is when. (V)

Senator, You're No Jack Kennedy

The most famous line ever from a vice presidential debate was spoken by then-senator Lloyd Bentsen (D) of Texas in 1988 in his debate with then-senator Dan Quayle (R), George H. W. Bush's running mate. When the moderator pressed him on his qualifications to be President, he said he had been in the Senate longer than President Kennedy. Bentsen shot back with: "Senator, I served with Jack Kennedy. I knew Jack Kennedy. Jack Kennedy was a friend of mine. Senator, you're no Jack Kennedy."

Recently, Ted Cruz invoked Kennedy and said if Kennedy were alive today he would be a Republican. Bentsen died in 2006, but Kennedy's grandson, Jack Kennedy Schlossberg, is very much alive and took huge offense at this comparison, just as Bentsen did 28 years ago. Schlossberg wrote an opinion piece in Politico yesterday taking Cruz down a peg or two and claiming JFK would most certainly not be a Republican. He pointed out that Kennedy gave science and technology the highest priority (with the space program) and modern Republicans reject science, starting with climate change (and evolution). As the first Catholic President, he understood religious bigotry all too well and would be horrified by Republicans attacking Muslims on account of their religion. Kennedy supported immigration and would never demonize foreigners or break up families by deporting parents with American children. He also said America would never start a war. The younger Kennedy went on an on about how the modern Republican Party rejects practically everything Kennedy stood for. (V)

First, Ted Cruz claimed he had lost his insurance due to Obamacare. Then, when confronted with the evidence, he admitted that wasn't the case after all. Now he is trying to talk his way out of the hole he dug, insisting the whole thing was a "misunderstanding," and that he did not realize that when one plan was canceled, he was automatically enrolled into another.

As Sir Walter Scott wrote, "Oh! What a tangled web we weave when first we practice to deceive." It is hard to imagine that anyone believes this story—that a Princeton and Harvard-educated lawyer not only could not read and understand a letter from an insurance company, but that he also failed to gain a clear understanding over the course of the next three, four, five weeks (presumably the letters were sent out with some lead time before the switchover on January 1). And what Cruz does not seem to have thought through is that if someone believes he is telling the truth (or if, somehow, he really is) then it actually looks rather worse for him. If he really thought that his family, including his two kids, did not have insurance, then he willfully allowed that lapse to continue; either to make a political point or because he was too busy campaigning to deal with the problem. Either way, it suggests putting politics ahead of his family's needs—not a good look for any politician.

Cruz bears more than a passing resemblance to Richard Nixon on a number of levels, and one thing they seem to have in common (as does Hillary Clinton) is an inability to admit they were wrong/being dishonest, and to take their medicine. Richard Nixon eventually learned his lesson the hard way; one wonders if Ted Cruz will have to do so as well. (Z)

Sanders Has His Own Ice Cream

Ben Cohen, the "Ben" in "Ben and Jerry's" has produced a limited edition of "Bernie's Yearning" ice cream. It consists of a thin disk of chocolate, representing the top 1%, with plain mint ice cream below it. He donated 25 of the 40 pints to Sanders' campaign, which will award them as prizes in a contest it is running.

The ice cream company itself, which is now owned by the British-Dutch conglomerate Unilever, immediately distanced itself from Cohen's action and said it had nothing to do with Cohen's new ice cream. (V)