Fidel Castro, leader of the Cuban revolution, and then longtime president of Cuba, has reportedly died at the age of 90. He had been in ill health for many years, and was rarely seen in public after giving up power eight years ago. Indeed, his disappearance from public life was so sudden that it gave rise to conspiracy theories that he was already dead and was only being kept "alive" for symbolic reasons, in the manner of El Cid.

Castro's death comes, of course, at a tricky time for Cuban-American relations. Barack Obama took steps to thaw the relationship between the two nations, while Donald Trump has signaled an intent to restore the Cold War status quo; a sop to his Cuban American supporters and latter day Cold Warriors like Kris Kobach and Michael Flynn. Theoretically, Castro's death should make no difference, since he has not led the island nation for years. However, just as he is a powerful symbol for those who love him. he is also a powerful symbol for those who loathe him. It could be that his passing gives political cover for Trump to pursue (or, at least, accept) a new era in Cuban-American diplomacy, especially since Fidel's brother Raúl will soon be out of power, as well (in 2018). (Z)

Trump Will Soon Get the Nuke 101 Tutorial

Some time in the next few weeks, a military commander will sit down with President-elect Trump and explain to him how to use nuclear weapons and the consequences thereof. Once he is inaugurated, he will be given a card that he needs to start the procedure. In addition, everywhere he goes he will be followed by a military aide who will carry a black satchel containing the nuclear codes, informally known as the "nuclear football." Trump will be given highly detailed instructions on exactly what he must do to launch a nuclear attack. He will also be instructed on the consequences of such an attack, as well as the fallout, both radioactive and political. For someone who doesn't like sitting down and getting detailed briefings that he is required to understand thoroughly, it could be unpleasant. John F. Kennedy was ashen faced after he got the briefing. It is not known how Trump will react until he gets the briefing, or how he will behave after he gets it. He is known to be impulsive and will be told in no uncertain terms that once a missile is fired, there is no way to stop it from reaching its target. (V)

The Presidency as a Profit Center

No doubt that President-elect Trump has been thinking about how he can make more than a measly $400,000 a year at his new job. He hasn't even been inaugurated yet, but the first chance to milk the job for all its worth has already appeared. The U.S. Secret Service is considering occupying space in Trump Tower on Fifth Avenue to protect the president, But rather than give it to the agency as a courtesy, Trump is negotiating with it to pay the full commercial rent, which is $3 million a year if the USSS takes the two floors it wants. All of that would go directly into Trump's pocket, so in 4 years, he would make $12 million from the government. Not bad for starters.

Overall, though, the presidency could be a loser for Trump, money-wise. At least, that's what the writers at The Economist think. They observe that, for all his reputation as a wildly successful businessman, the Trump empire isn't really all that impressive:

Far from being a global branding goliath, it is a small, middle-aged and largely domestic property business. If Trump family members are to make a second fortune in the next four years, they will have to reinvent a mediocre firm. Trump Inc. is worth perhaps $4bn, with $490m of annual revenue. Were it listed it would be the 833rd-largest firm in America by market value and 1,925th by sales...About four-fifths of that value sits in residential and commercial properties, including golf courses, owned by the Trump Organisation. Half of the group's entire worth consists of five buildings: Trump Tower and two other Manhattan buildings, and passive stakes in two offices in New York and San Francisco.

The problems that Trump's firm faces are numerous. First, its main holdings are in a segment of the economy that is very soft right now (real estate), and most of its assets are aging rapidly. Second, future development (or renovation) will require massive bank loans, and the big banks may be leery of doing business with a firm where the management structure is unclear, and messy conflict-of-interest lawsuits could be in the offing. Third, Trump is undoubtedly counting on an increase in the value of his "brand," but such things are not so easy to monetize, and his brand may actually take a dive if his presidency is unsuccessful or controversial. The Economist's conclusion: "It seems likely that President Trump will inevitably blur the lines between business and politics in potentially disturbing ways—expect grubby deals and murky meetings. But it is less clear that his firm's value will soar." (V & Z)

Donald Trump, a thrice married New York liberal who grabs women by the p***y, never asks God for forgiveness, and only goes into a church if he is holding a rally outside and it starts to rain, won 81% of the evangelical vote. That is more than the born-again George W. Bush got. Now the evangelical leaders expect him to deliver. The first thing they want is a pro-life Supreme Court justice to replace the late Antonin Scalia. That they will probably get, since it doesn't cost Trump any political capital. A second item on their list is a Secretary of Health and Human Services who is against abortion. That is also easy, since anyone Trump nominates is sure to be confirmed by the Senate. The third thing they want is to defund Planned Parenthood. That will be trickier because it requires Congress to act and the Senate Democrats will likely filibuster any attempt to do so (although it could be rammed though using the budget reconciliation process). If they can get all three, they will probably have no regrets that they supported Trump, even though he wasn't their first, second, third, or even tenth choice. If he doesn't deliver, they will feel duped.

If they get all three, will that end abortions? Well, if Roe v. Wade is overturned, then red states will surely outlaw the procedure, but blue and purple states won't. Women with enough money will always be able to travel to the closest blue state to get an abortion, but it will be harder for poor women. Expect drugstores in blue states to start aggressively advertising RU-486 and Plan B on the Internet, so the net result of all the changes may well be to make surgical abortions less common and medical ones more common. In fact, it is possible that the number of abortions will actually rise, since medical ones are less invasive than surgical ones. That was never the evangelical movement's game plan. (V)

While Democrats were wiped out at the federal level earlier this month and face a terrible 2018 Senate map, there is one area in which things look better for them: the governors' races. In 2017 and 2018, 38 states will pick a governor; 2 in 2017 and 36 in 2018. Furthermore, many of the contests will be in states that Barack Obama and/or Hillary Clinton won. Best of all for the Democrats, 14 Republican governors will have hit term limits in 2018, meaning that there will be open seats in those races. Here is the map: 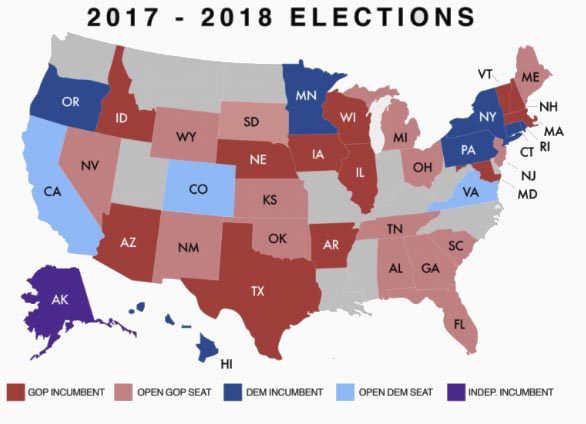 States where the Democrats have a good chance of picking up seats including Nevada, New Mexico, Michigan, New Jersey, and Maine, since all of these will be open seats. Democrats will have to fight off Republican incumbents in Maryland, New Hampshire, Vermont, and Massachusetts. States where they have a decent shot at picking up a seat include Ohio and Florida.

Two factors will undoubtedly play a huge role. First, is the country happy with Donald Trump two years from now? Second, what is turnout like? Democratic turnout usually drops during the midterms, but Democrats may put in a lot of effort in 2018 due to the stakes.

First, most governors have 4-year terms, so they will be in office when the 2020 census is taken and the gerrymandering begins shortly after it. A Democratic governor in a state with a Republican-controlled legislature can veto the gerrymander, forcing a compromise, namely fair congressional districts, with neither side having an advantage. That alone is worth the price of admission.

Second, a Democratic governor can veto laws intended to make it harder to vote, including voter ID laws and similar kinds of laws.

Third, if the Supreme Court either overturns Roe v. Wade or otherwise severely limits abortions in the next few years, some states will try to outlaw the procedure. A Democratic governor could veto such attempts. All in all, the governors collectively have a lot of power to shape the country, so these 38 gubernatorial elections will be very important. (V)

Four Sites to Break Out of the "Liberal Bubble"

Part of what made the outcome on November 8 such a surprise to tens of millions of Democrats was a total lack of familiarity with what the rest of the country was thinking. The Guardian's Jason Wilson, noting that a lot of right-wing sites (ahem, Breitbart) are worthless propaganda, suggests four outlets that might be useful for those looking to broaden their perspectives:

It's a short list, but it's not a bad one. To this list we could add National Review, the direct descendant of William F. Buckey's famous conservative magazie. Like Reason, it has an intellectual tone and publishes carefully thought out articles from a conservative viewpoint. The publication detests Trump, so it should be interesting to see what it has to say in the coming four years. Or, if you prefer a bit more bomb throwing with your Ayn Rand, then try RedState.com, which really should be called TedState.com. It represents the grass roots, loves Ted (Cruz) and hates Trump. It was founded by Erick Erickson, but he has since departed to start a new Website, The Resurgent. (Z)

A New Mexico search-engine optimization firm, 1stinSEO.com, has made headlines with their announcement that they will no longer do business with, "any person that is a registered Republican or supports Donald Trump [or] with business interests that support either the Republican Party or Donald Trump." Recognizing that they have no good way to identify who these people might be, they are asking clients to self-report.

So, is this legal? Generally speaking, according to legal scholar Eugene Volokh, it probably is. Outside a few municipalities, discrimination against customers on the basis of their political beliefs is not illegal (though discrimination against employees is). With that said, the question has largely not been tested in the courts. If large numbers of businesses started trying to pull this particular stunt, there is a good chance that either newly-decided jurisprudence or newly-passed legislation would bring an end to it very quickly. (Z)