Who Knew Governing Was so Hard? Obamacare Repeal Fails

President Donald Trump and Speaker Paul Ryan (R-WI) begged, cajoled, twisted arms, wheeled and dealed, and, finally, resorted to making threats. In the end, none of it worked. After delaying a vote on the AHCA on Thursday, it was clear that the votes would not be there on Friday, either. So, the Speaker went to the White House for instructions, and The Donald made the call: Kill it. The AHCA is thus dead without even coming up for a vote, and—as both Ryan and Trump acknowledged on Friday—Obamacare is, and will remain, "the law of the land for the foreseeable future." The GOP said much the same thing about Social Security...80 years ago.

There are an awful lot of moving parts here, and any assessment is probably best organized in terms of winners and losers. So, let's start with the losers:

Moving on, let's talk about some winners:

We're not the only ones to do a winner/loser approach; others can be found at The Hill, RollCall, PoliticusUSA, The Daily Kos, and, for those of a financial bent, CNBC.

So, what happens next? Well, the problem with holding (or canceling) a vote on a Friday afternoon is that there's no time left to answer that question. Tax reform is the obvious answer, but maybe not so much, given that it will be very difficult politically, and there won't be extra money from the AHCA to pay for it (see below). Presumably, the future will become less cloudy next week, but at the moment, your guess is probably as good as Paul Ryan's. (Z)

Trump: I Should Have Done Tax Reform First

Donald Trump is famous for never, ever, admitting he has done anything wrong, so it is surprising that just before the vote on the AHCA bill, he admitted to four people close to him that pushing repeal of the ACA to the front of his legislative queue was a mistake. Tax reform should have gone first. Fundamentally, Trump misjudged how difficult healthcare reform would be and how much opposition there would be from his own party to any concrete bill.

The problem here is that Trump has no idea how difficult tax reform will be. Republicans all want to cut taxes. In the abstract, there is total agreement. It's when the subject of whose taxes will be cut that the trouble comes in. For example, Trump wants a border adjustment tax that will tax imports but exempt exports from tax, in order to stimulate exports and penalize imports. Big exporters like Boeing and John Deere are wildly in favor of this. Big importers like Walmart and Target are equally wildly against it. Then there is the small matter of whether the emphasis should be on cutting individual taxes or corporate taxes.

if there is a massive tax cut, deficit hawks will scream unless there is an equally large spending cut. However, the three biggest items in the federal budget, by far, are (1) Social Security, (2) Medicare, and (3) military spending. Trump has promised not to touch (1) and (2), and he wants to increase (3). Next come (4) interest on the federal debt and (5) veterans benefits. Not too promising. Everything else combined is about 1/8 of the budget. Here is the famous pie chart. 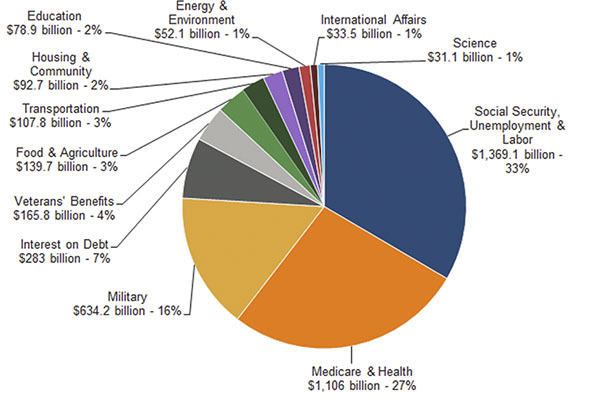 Oh, did we forget to mention how taxes interact with foreign policy? Sorry. If Trump and Ryan push for and get a border adjustment tax (basically, a tariff on imported goods), China, Germany, and other major trading partners will surely responded with their own tariffs on American goods, leading to a trade war. The Smoot-Hawley tariff didn't work out so well, but maybe it will do better the second time.

And then there is the minor matter of North Korea, which is working hard to build a missile that can deliver a nuclear weapon to mainland America. The only real leverage the U.S. has against North Korea is China, which provides all of North Korea's oil. If China were to cut off the oil supplies, North Korea would totally collapse within a week. What are the odds of China cooperating on North Korea after Trump has just imposed a 45% tariff on Chinese goods entering the U.S.?

If Trump expects the tax-cut bill to be all rainbows and unicorns, he is going to be quite surprised when an actual bill is drafted. We have a headline stockpiled for future use: Who knew tax cuts were so hard? (V)

The government's investigation of Donald Trump's former campaign manager, Paul Manafort, has now extended to Cyprus, an island nation in the Mediterranean perhaps best known as a center where Russian billionaires like to do their money laundering. Manafort ran transactions through Cyprus on a regular basis. For example, in Oct. 2009, one of his companies received $1 million from an unknown source via a bank account in Cyprus, then split it in two and sent $500,000 to each of two unknown destinations. There is nothing illegal about doing business in Cyprus per se, but why did he do the transaction there? American banks are happy to do wire transfers, as well. Perhaps the secrecy that banks in Cyprus offer had something to do with this? When White House Press Secretary Sean Spicer was asked about it, he replied: "You pull out a gentleman who was employed by someone for five months and talk about a client that he had 10 years ago." Nice try, but we probably haven't heard the last of this story. (V)

A new CNN/ORC poll shows that Donald Trump's view of undocumented immigrants ("deport them all") doesn't align well at all with what the American people think. The poll shows that 90% of the respondents think that undocumented immigrants who have been in the country for many years, speak English, and are willing to pay any back taxes owed should be allowed to stay and eventually apply for citizenship. Also, 60% think the government should prioritize legalizing those people over deporting them. The poll closely mirrors an earlier Quinnipiac University poll that shows support for allowing undocumented immigrants to stay is 63%. Sizeable majorities disapprove of the planned border wall and the Muslim ban.

Polls or no polls, presidential adviser Steve Bannon flatly rejected the news and said that an "overwhelming majority of Americans" support his "populist nation-state policies." This statement is clearly false. Part of Bannon's "misconception" is that when people are presented with some of his ideas in the abstract, like "America first," they sound pretty good. But when people realize the actual policy that goes with the slogan, they don't like it at all. That is surely going to be true of many other policies going forward. "Tax reform" sounds pretty good to many people who feel that Jimmy Carter was right when he said the U.S. tax code is a "disgrace to the human race." But their idea of reform may not be giving millionaires and billionaires a huge tax cut and then cutting social programs to pay for it. (V)

In 2016, the FCC voted to required Internet providers to get their customers' permission before selling information about what they do online to third parties. The Senate just voted 50-to-48 along party lines to overturn that policy. The House is expected to follow suit and Donald Trump is expected to sign the bill when it lands on his desk. This means that Verizon, Comcast, AT&T and other Internet providers can track what people do online and sell that information to the highest bidder without asking permission from their customers or even notifying them that they are doing so. For example, if someone does online research on some disease, that information might be of interest to companies that sell life insurance or to employers. Sen. Jeff Flake (R-AZ), who introduced the bill, said the FCC regulation was an example of a "bureaucratic power grab." The vote is a victory for Internet providers, who see the data about their customers as gold to be mined, and is a defeat for privacy advocates.

Next on the agenda for the big carriers is "net neutrality," a ruling that prevents them from selling high-speed delivery guarantees to big corporations and disadvantaging the millions of smaller websites that can't afford to buy access. The end game here would be to turn the Internet into something like cable television, with a few thousand large corporations having big websites and not much else out there. (V)

The Toronto District School Board has announced that it will stop schools from organizing trips to the U.S. on account of the uncertainty of which students may be affected by the Muslim travel ban. Trips that are already scheduled will take place but no new ones will be planned. The board said that it would put students in a terrible situation if some members of a class were denied entry to the U.S. The class could hardly just leave the students at the border and continue with the trip. To avoid such situations, the board, which oversees 246,000 students in 584 schools, decided the best policy was to simply avoid all school travel to the U.S. (V)