The failure of the healthcare bill may require a course correction on the upcoming tax bill (see also below). Since the ACA taxes will be maintained, the revenue baseline which any tax bill has to meet to qualify for the budget reconciliation process may make serious tax reform too difficult. Instead, Republicans may simply decide to cut corporate taxes (and maybe individual taxes) and leave it at that. Republicans in Congress are probably aware that what President Donald Trump wants is a win. He doesn't actually care much about the contents of the tax bill, as long as something passes and he can sign it.

The only realistic way Congress could really change the tax code is to find a big new source of revenue. One such source would be a border adjustment tax, something that Trump and Speaker Paul Ryan (R-WI) would like, but which will run into opposition from many companies.

The question of who gets to write the bill is already contentious. Rep. Kevin Brady (R-TX), chairman of the House Ways and Means Committee, thinks he is going to write the bill. However, both Treasury Secretary Steve Mnuchin and National Economic Council Director Gary Cohn also want to write it. This could become a sticking point as Congress is not about to cede the power of the purse to the executive branch.

Unlike healthcare, where the Republican Party is split along ideological lines, there is no ideological split on taxes. All Republicans want cuts. However, they don't agree on whose taxes to cut. Trump wants major tax cuts for the middle class. Speaker Paul Ryan (R-WI) has different ideas. He wants to focus the tax cuts on the wealthy and scrap provisions in the tax code that help Americans with modest incomes. Under a draft proposal of Trump's plan, taxpayers with average incomes would get a cut of about $1,100. Under Ryan's plan that would be $60. An analysis by the nonpartisan Tax Policy Center shows that in Trump's plan, 50.8% of the cuts would accrue to the top 1% of taxpayers. Under Ryan's plan 99.6% go to the top 1%. However, tax policy is about numbers, not ideology. Trump and Ryan could eventually compromise on having, say, 75% of the tax cuts go to the top 1%. (V)

Axios has learned that Donald Trump, still seething at the House Freedom Caucus for sinking the AHCA bill, wants to bypass them next time and do a deal with the Democrats. The idea is to go for a tax-cut bill and an infrastructure bill at the same time, forcing Democrats to swallow the tax cuts if they want to get the infrastructure and jobs.

As usual, nothing is simple when you actually have to govern. If Trump's infrastructure plan is to sell off the Interstate Highway System, National Parks, and other federal assets for pennies on the dollar and get promises from the buyers that they will improve them, Democrats are unlikely to go for this. They want to spend actual federal dollars on repairing infrastructure, not leaving it to the private sector. However, a big tax cut and spending a trillion dollars on infrastructure will leave a gaping hole in the federal budget, something many Republicans will strongly oppose. Of course, if there are new taxes in one of the bills, that might appease the deficit hawks, but will anger whoever is being taxed. An idea ("combine tax cuts with infrastructure") is one thing; a concrete bill that all interested parties can study in detail is something quite different. (V)

Donald Trump, apparently looking for victories wherever he can find them, will reportedly visit the EPA today to sign a broad executive order rolling back many different Obama-era protections for the environment. Specifically, the order will rescind at least six Obama-era executive orders aimed at curbing climate change and regulating carbon emissions, including a 2013 order instructing the federal government to prepare for the impact of climate change.

The environmentalists are not happy, of course. "These actions are an assault on American values and they endanger the health, safety and prosperity of every American," said Tom Steyer, the president of NexGen Climate. But for Donald Trump, environmentalists rank somewhere on the list between handicapped people and unattractive women, so their opinion doesn't count. (Z)

Attorney General Jeff Sessions announced yesterday that Dept. of Justice grants to local law enforcement agencies will be withheld from so-called sanctuary cities. These are cities that refuse to turn undocumented immigrants arrested for any reason over to the Justice Dept. for deportation. In his speech, Sessions called for states and local jurisdictions to fully comply with federal law.

During his campaign, Donald Trump made clamping down on sanctuary cities a major issue. By blocking grants to these cities, Sessions hopes to force them to abandon their policies of not cooperating with the federal government on immigration issues. This battle is certain to end up in the courts, most likely within a week. (V)

Since Mexico apparently does not plan to pony up, Donald Trump has asked Congress for $1 billion to begin building his wall. This would only be enough to reinforce about 20 miles of existing fencing/wall, and then to add just 48 miles of new wall. $1 billion just doesn't go as far as it once did, apparently.

Especially after the AHCA failure, Trump simply has to build some amount of wall. It would not be a surprise, however, if he gets his $1 billion, poses for some pictures while ground is being broken on the 48 new miles, and then forgets about the project for three years. (Z)

Republicans Have an Easy Way to Kill the Affordable Care Act

Despite the defeat of the AHCA last week, the Republicans have a really easy way to kill off the ACA. All they have to do is—nothing. The story is a bit complicated, but here it is in a nutshell. The ACA contains a provision to provide financial support to insurance companies that get stuck with an unexpectedly large number of sick people, which is a direct consequence of their being forced to accept anyone who applies for coverage. When Barack Obama was president, Republicans sued to prevent the subsidies from being paid out to the insurance companies. A federal judge ruled in their favor. Now if the plaintiff (House Republicans) and the defendant (Trump) both decide not to appeal the decision, the judge's ruling will stand and billions of dollars in subsidies will not be paid to the insurance companies. Many of them will simply exit the individual market, killing off the ACA.

By accepting the judge's ruling and not appealing it, Trump's statement that Obamacare will implode could become true and his fingerprints won't be on it. The only downside is that millions of people will lose insurance and they may be angry that Trump didn't replace it with something teriffic, as he promised. (V)

Three weeks from today there will be a special election in GA-06 to replace former representative Tom Price. For years, this has been a reliable Republican district. Normally, any Democrat running here would be lucky to raise $20,000. This time it is different. Democrat Jon Ossoff has already raised $3 million and is leading in the polls. Nothing like this has ever happened before. The district consists of well-educated, high-income suburbs of Atlanta. In previous elections, Republicans like Newt Gingrich, Johnny Isakson, and Price have won it by 30 points or more. It could be different this year, because if the money raised is any indication, Democrats are enormously fired up.

Ossoff is not running explicitly against Donald Trump, but many of his supporters and volunteers see an Ossoff victory as a slap in the face to Trump. Georgia uses a jungle primary system, so if no candidate wins an outright majority, there will be a runoff in June. With five Democrats and 11 Republicans in the race, it is unlikely that any of them will hit the 50% mark. The leading Republican is Georgia's Secretary of State Karen Handel.

The Republicans' majority in the House is so large that losing one seat means very little in terms of votes, but losing a district that they have traditionally won by more than 20 points in every election since 2002 could be a psychological shock. (V)

Donald Trump's son-in-law, Jared Kushner, is in charge of making peace in the Middle East. However, Trump realized that getting the Israelis and Palestinians to agree on a peace plan wasn't going to take much time, so he gave Kushner another job as well: redesigning the federal government to be more like a business. In response to his new job, Kushner said: "The government should be run like a great American company." Of course, this ignores the fact that someone running a business has basically one or two metrics to target: amount of profit and maybe market share. The government has many different stakeholders, all of whom have different ideas of what constitutes a good government. Kushner may soon discover that not everyone agrees on what the government should do, so at some point he may start ignoring this job and go back to his easier one, namely making peace in the Middle East. (V)

Kushner Met with Executives of Russian Bank in December

After Donald Trump won the election but before he was inaugurated, Jared Kushner met with Sergei Gorkov, chairman of of the Russian state development bank Vnesheconombank (VEB). Gorkov was appointed to his position by Vladimir Putin in 2015. He formerly worked for the FSB, the successor to the KGB, where Putin worked. The bank admitted the meeting took place but didn't say where it was or what was discussed.

The bank is among the institutions affected by the U.S. sanctions imposed after Russia invaded Crimea. Speaking with executives of a sanctioned bank does not violate U.S. law, but it is unusual for a top adviser to an incoming administration.(V)

In the daily Gallup tracking poll, Donald Trump's approval rating has dropped to 36%, the lowest of his presidency. He is deeply under water now, as can be seen from this graph: 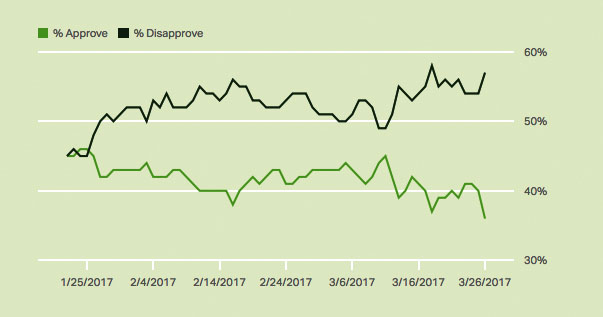