The 1/6 Committee Hearings, Day 1: It Was Carnage

Prior to the commencement of 2 weeks' worth of televised hearings, the members of the 1/6 Committee promised that they were going to knock viewers' socks off. Last night's presentation lasted a little over 90 minutes and, remarkably, it lived up to the hype. One of the two in-person witnesses, police officer Caroline Edwards, was asked to describe the scene at the Capitol on January 6. "It was carnage," she said. She could just as easily have been describing the scene at the Capitol on June 9, as last night's broadcast was an absolute body blow to Donald Trump and his enablers.

If you haven't seen the hearing already, and are interested in watching it for yourself, here is the NBC feed:


If you are just wanting to see the highlights, ABC News has edited together a 5-minute package you can take a look at.

In any event, here are the 10 storylines that stood out most to us. Note that we deliberately shut off the post-hearing commentary, and did not look at any Internet sites before writing this, so as to avoid any external influences on our thinking:

So, that's how we saw it. And now that this is complete, we'll go and take a look to find out how others saw it. (Z)

The first night of primetime hearings is a big story, and one that concluded early enough that the takeaways pieces are already online. Here's how some of the nation's biggest outlets had it (let's see if they agree with our take):

It would seem that we were indeed watching the same hearings as everyone else. The recurring themes here are: (1) Trump is under a large and very unfriendly microscope, (2) he's being hurt by testimony from some of the innerest of his inner circle, (3) the video footage was devastating, (4) Caroline Edwards was very compelling, and (5) there's much more to come. (Z)

The 1/6 Committee Hearings, Day 1: The Response from the Right

Now let's turn our attention to the politicians and media outlets on Donald Trump's side of the aisle. As we note above, they're going to do everything they can to undermine the 1/6 Committee in general, and last night's hearing in particular. It won't be easy, since Thompson, Cheney and Co. did a crackerjack job.

As it turns out, there are really only two responses thus far. The first is the most obvious one, namely questioning the legitimacy of the entire endeavor. Leading members of the Grand Old Party got started on this early, well before the hearing actually started yesterday. There was a prebuttal press conference on Capitol Hill yesterday featuring a motley crew of the truly Trumpy members of the House and those who are merely pretending in order to advance their political careers. Rep. Elise Stefanik (NY), who is in the latter group by all indications, said this:

This further solidifies what we know, what we have known from day one. This committee is not about seeking the truth, it is a smear campaign against President Donald Trump, against Republican members of Congress and against Trump voters across this country. This committee is unconstitutional, it is illegitimate. It was not put together according to the rules of the House. It does not serve any true legislative or oversight purpose and it is not about finding out why Nancy Pelosi left the Capitol so ill-prepared that day.

Other members observed that the Democrats are trying to obscure the real story of 1/6 (Jim Jordan), or that the committee is doctoring the evidence (Kevin McCarthy), or that Nancy Pelosi should stop wasting time on nonsense and should instead be focused on the nation's fentanyl crisis (Steve Scalise, LA).

The Republicans' friends on Fox were happy to carry on this line of thinking while the hearings were underway. Tucker Carlson described the events of 1/6 as a "minor outbreak" of mob violence, and that continued focus on the incident is "insulting" and "deranged" and declared that "[W]e're not playing along. This is the only hour on an American news channel that will not be carrying their propaganda live." Hannity's first guest, the mediocre sportswriter Jason Whitlock, concurred that "There was a riot, a small one, that got a little bit out of hand." Sean Hannity, on his program, dismissed the hearing as "another anti-Trump smear that will accomplish nothing," while Laura Ingraham, on hers, characterized it as "the lastest Leftist primetime flop."

Fox's website, meanwhile, highlighted the other response from the right. See if you can figure out what that response was; here's a screen capture of the site at around 01:30 a.m. PT: 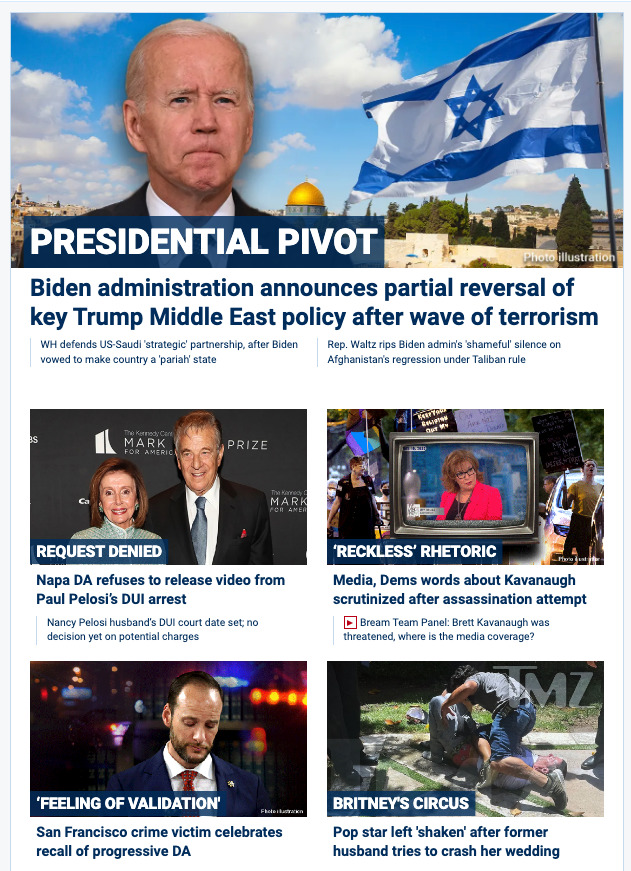 So, the big news of the day would appear to be Joe Biden selling out Israel, Nancy Pelosi's husband's week-old DUI arrest, the Democrats' culpability in Brett Kavanaugh's life being (nominally) threatened, the downfall of San Francisco's DA, and the Britney Spears wedding crasher. So that's four "bad stuff 'bout the Democrats" stories and some celebrity gossip. Apparently, nothing bad happened to any Republican yesterday, at least according to Fox (What) News.

There, then, are the two responses thus far: (1) attack the hearing's legitimacy and (2) pretend there was no hearing. Here's how other right-wing outlets handled things last night:

This is still an ongoing story, of course, since there will undoubtedly be additional responses from the right on Friday. In particular, we do not know what Donald Trump has said yet, if anything. There is much we are willing to do to put together a good site, but signing up for a TRUTH Social account is not one of those things. We are pretty sure though that some intrepid reporter for Politico, The New York Times, or The Washington Post, will do so and report on what he or she saw there. (Z)

This will be our last 1/6-related item of the day; we promise. Gov. Gretchen Whitmer (D-MI) is running for reelection this year and, at this point, she might just end up unopposed in the general election. Five of the Republicans who hoped to challenge her were disqualified for submitting phony signatures, leaving just five Republicans standing. And now one of those, Ryan D. Kelley, has been arrested on charges related to participation the 1/6 insurrection.

Kelley faces four counts, most significantly disorderly conduct and willfully injuring or attacking U.S. property. Normally, that would be enough to end a political campaign. But we can find nothing in Michigan law that renders him ineligible. And the kind of voters Kelley is trying to attract may see his "martyrdom" as a feature, and not a bug. So, maybe he'll drop out in order to focus on his defense. But maybe this will propel him to the top of the polls. Who knows? The primary is August 2. (Z)

At the end of the evening on Tuesday, former representative and Trump cabinet officer Ryan Zinke had a thin lead in the voting to be the Republican nominee in MT-01. Now, enough ballots have been counted that Zinke has been declared the winner. With more than 95% reporting, Zinke has 41.7% of the vote as compared to 39.8% for nearest competitor Al Olszewski.

As with Ryan Kelley (see above), there was a time when a politician as damaged as Zinke is would be unelectable. Recall that Albert Fall, who served as Secretary of the Interior under Warren Harding, did the exact same thing Zinke did, namely steering federal oil rights to his friends in exchange for financial considerations. In Fall's case, he was disgraced, spent time in prison, and died in poverty. Zinke, by contrast, kept his job. He was only forced to resign after a different scandal, in which he was found to be faking his public calendar to hide meetings with the officials he was supposed to be regulating.

MT-01, despite its numbering, is the new district created because the state picked up a second CD in this year's round of redistricting. And while it is red, it's not nearly as red as MT-02, which is why incumbent representative Matthew Rosendale (R) chose to run in MT-02. Roughly speaking, Zinke's would-be district is R+7. He'll be up against Democrat Monica Tranel, who won nomination easily and, in fact, collected more votes on Tuesday than he did (36,829 to 35,241). If she turns out to be a strong candidate, and Montanans decide they are offended by Zinke's crookedness, it's at least possible the Democrats could find themselves with a surprise pickup in Big Sky country. (Z)

Lawton Tries to Salvage His Career

Rep. Al Lawton (D-FL) is about to lose his majority-black district (FL-05) due to Gov. Ron DeSantis' (R-FL) gerrymandering machinations. It is possible that, over the next 2 years, the courts will overrule the Governor, but it's not likely that will happen in time for this cycle. So, if Lawton wants to continue his career uninterrupted, he's gotta find a new district, at least for now. On Thursday, he made his choice: FL-02.

FL-02 is quite red; under the old map it was R+20 and under the new one it's about R+14. Given its leaning, it's represented by a fire-breathing Trumper in Neal Dunn (R). Lawton will run a centrist campaign, emphasizing his ability to bring home the bacon, and hammering Dunn for opposing infrastructure funds and COVID relief. Stranger things have happened, but you can't like Lawton's chances. (Z)

This Week in Schadenfreude

Have we already directed too much snark in the direction of Fox today? Actually, that's a trick question. There's no such thing as too much snark when it comes to Fox. So, for this week's schadenfreude item, we're going to use something brought to our attention by reader J.L. in Los Angeles. June is Pride month, of course, and Fox got in on the festivities, cutting a promo in honor of the occasion. It is an understated and not especially enthusiastic promo, but a promo nonetheless.


We don't approve of demonizing any group who lives below the 49th parallel, and so we don't approve of the frequent scapegoating done by the Tucker Carlsons and Sean Hannitys of the world. But turning around and making a promo that presents an alternative kumbaya reality? Well, now we've added hypocrisy on top of everything else. So, there's certainly some schadenfreude when Media Matters calls Fox out on their two-facedness.

One other note: CMT (formerly Country Music Television) has colored its logo rainbow for the month. If even CMT and Fox, both of which attract right-leaning viewerships, feel they have to tip the cap (or the cowboy hat) to Pride, it suggests that Ron DeSantis' position is a minority position, and that polls reporting that 60% or 70% or 80% of Floridians support the "Don't Say Gay" bill are a bunch of cr*p. (Z)

If you wish to contact us, please use one of these addresses. For the first two, please include your initials and city.